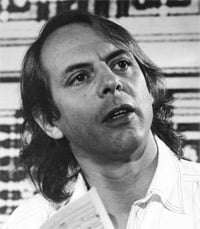 A concert of various memorials and ‘modern classics’ in terms of programming. If the inclusion of Karlheinz Stockhausen’s Gesang der Jünglinge (1956) was prompted by the composer’s death last December, then it was undeniably appropriate.

Among the handful of his works whose future status is guaranteed, the piece sounded newly minted in its latest re-mastering, while the placement of loudspeakers made the most of the Queen Elizabeth Hall’s spatial potential without diluting the music’s sonic potency. Whether approached in the spirit of an ‘electronic Mass’ (as the composer intended, and as would have been underlined had it been premiered in Cologne Cathedral as had envisaged) or as the opening-out of the still-in-its-infancy electronic medium onto a hitherto new plane of textural complexity and aural finesse, its capacity to provoke and to move has not diminished over time, though the conviction that Stockhausen has packed more incident into its 13 minutes than into many of his later evening-length works remains hard to resist.

Whether Pierre Boulez considered Rituel in memoriam Bruno Maderna (1974) as a commemoration of a quarter-century of avant-garde endeavour in addition to that of one of his most valued colleagues, the work has long been among his most performed; indeed, it ranks among the (surprisingly?) fewpieces whose sound and range of gestures are unmistakable at first hearing. Adopting a marginally steadier basic tempo than the composer (without the elemental slowness of a performance under Heinz Holliger two decades ago), Peter Eötvös imparted a real sense of space and textural definition to its hieratic unfolding of verses and refrains – one which opens out into a series of implacable contrasts between the ensembles and thus emphasised its expressive impact as much as its processional logic. 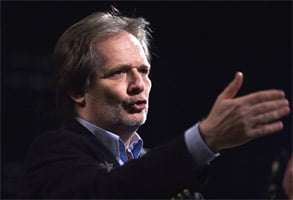 The concert’s second half consisted of Olivier Messiaen’s Et exspecto resurrectionem mortuorum (1964) – his life-affirming fulfilment of a commission honouring the dead of two World Wars. A watershed, moreover, between the often-experimental nature of the composer’s music from the previous two decades and the tendency to synthesis of his later pieces. Certainly the monumental quality in its alternation of starkly contrasted events – themselves of an elemental dynamism and stasis – anticipates the fuller-length works to come, while the compression of its five movements (each prefaced by an apocalyptic biblical quotation) equally recalls the ensemble pieces preceding it.

Without sacrificing overall impact, Eötvös took a measured view of its progress – and enhanced by observing the lengthy silences between each of those sections (yet the bronchial members of the audience seemed not to have grasped that these were for reflection rather than relaxation). Thus the more intimate ensemble passages of the second and fourth movements were duly placed in relief next to the eruptive contrasts of the central movement (its vast crescendos for tam-tams here kept within realistic limits) and the awesome build-ups of those outer movements.

This is a work that arguably needs a cathedral acoustic – or even an enclosed open-air space – to do it full justice, but no-one hearing this account can have doubted its magisterial impact. Good, too, that Eötvös, his standing as a composer and administrator ever increasing, can still make time to direct such works as first brought him to our attention almost a quarter-century ago.