Wagner
Die Meistersinger von Nürnberg – Music drama in three Acts to a libretto by the composer [sung in German, with English surtitles; performed in a reduced orchestration by Jonathan Finney] 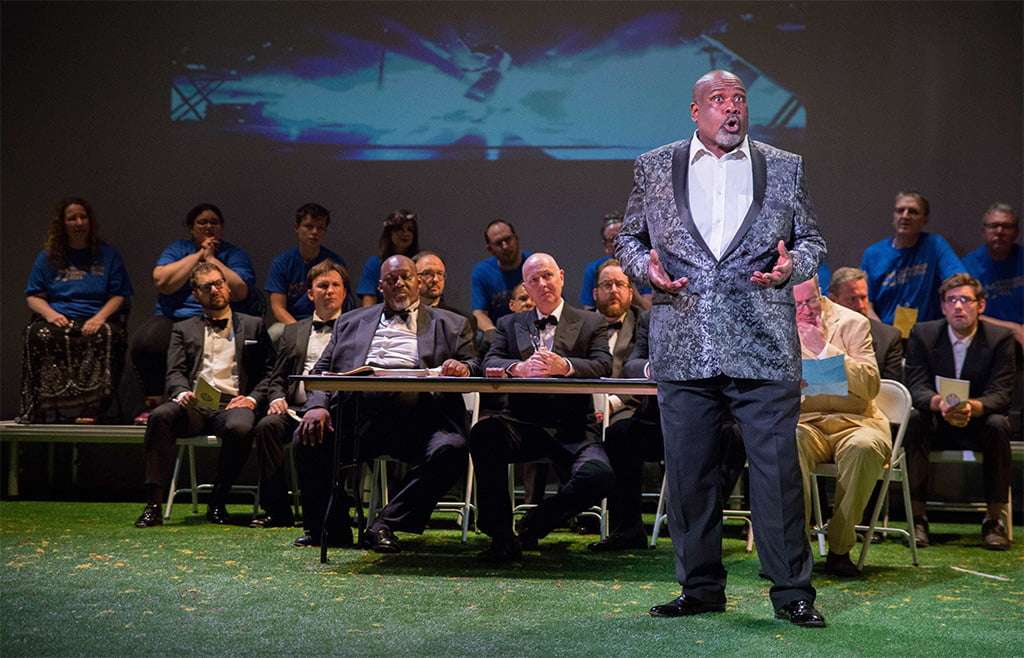 Fulham Opera, formed in 2011, is a relative newcomer to the London amateur-professional fringe. Under its artistic director Ben Woodward, the company already has a Ring, the Dutchman, Puccini and Verdi under its belt, and its latest, equally ambitious project is this Meistersinger, performed at the modern Greenwood Theatre near London Bridge station, not the usual base at St John’s Church, Fulham, with its smaller capacity, wallowy acoustic and awkward sightlines.

Die Meistersinger is all about singing and revolves around Hans Sachs, Nuremberg’s philosopher-cobbler, and Walter, the unknown knight who breaks the Mastersingers’ conservatism with his new song, and Fulham Opera does its best to honour that. Initially, the three leads (Sachs, Walther and Eva) were split between two singers each over the four performances, but the second Sachs withdrew, leaving Keel Watson in sole command. While Sachs doesn’t have that much to do in the first Act, he then dominates the other two. Watson was husbanding himself in the second one and using a score though the third, but his ‘Flieder’ and ‘Wahn’ monologues went to the point of the drama, and his “heilige deutsche Kunst” speech was the high point of the conclusion. Watson has developed a repertoire of hand, arm, eye and eyebrow gestures that express anything from fury and tenderness to eye-rolling irony with elegant economy, and they helped lift the poignancy of his Marschallin-like surrendering of Eva to the younger Walther. Watson’s bass-baritone doesn’t bark at the top of its range, and even when he doesn’t sing out his grainy middle voice has an indisputable authority. 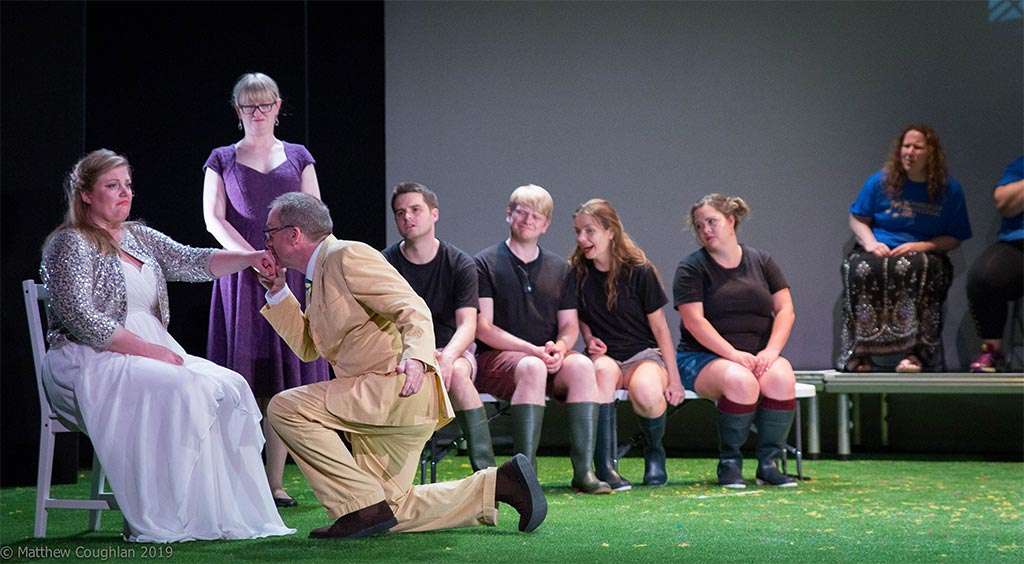 Wagner calls for a lyrical, Italianate tenor for Walther (as he does for Lohengrin, another knight-to-the rescue), and Ronald Samm fulfils the brief in his middle register but the voice becomes more strenuous higher up. This unbalanced the pivotal Quintet and dried the ardour of Walther’s Prize Song, and he was at his best in developing the song with Sachs. Catharine Woodward lacks nothing in gleaming Wagnerian command, vital in this nearly all-male cast, but her soprano’s power and volume stay at the same pitch, so that Eva’s quieter doubts and reflectiveness go on the back burner – a pity, because she looks the part.

Sarah Denbee has an intuitive sense of nuance for everything Magdalene sings, and she effortlessly shapes her lovely mezzo to the scale of orchestra and theatre. She is well-matched by Edward Mout as an ingratiating David. His intonation slides higher up, but in general he is marvellous as the Mastersingers’ apprentice-in-chief, while the David/Lene double-act is attractive and mercifully un-camped-up. For whatever reason, Jonathan Finney took a while to sing out as Beckmesser, and when he did he was spectacularly on- (or perhaps off-) song in his failed serenade and corrupted Prize Song. When Andrew Major sings the Masters’ roll-call, you wish that other Masters are so open-throated and forthright.

Paul Higgins’s production is based around the set-up for the 2019 Nürnberg Musikfestival, and doesn’t get in the way of the drama. The Mastersingers are like the Rotary Club in plenary session, and the chorus’s opening hymn is led by a woman priest. Jessica Staton’s designs include a lot of unflattering T-shirts and shorts, and there is a back-screen for projections, including a spoof, OTT-violent newsreel of Nuremberg in flames for the riot scene. Cobblers and apprentices don’t really fit with 2019, but it doesn’t matter. Direction-wise, Walther looks like an ageing rock-star for the singing competition, while Beckmesser is a very curious figure – vain, supercilious, self-promoting, and sporting a man-bun that sums up his total lack of allure – yet despite the unfocussed caricature somehow Jonathan Finney makes him sympathetic. Sachs sings all the patriotic stuff about deutsche Volk, Reich and heilige Kunst, but the surtitles discreetly leave it untranslated, which is depressingly mealy-mouthed, and the finale’s festive bunting is festooned with lots of little EU flags. 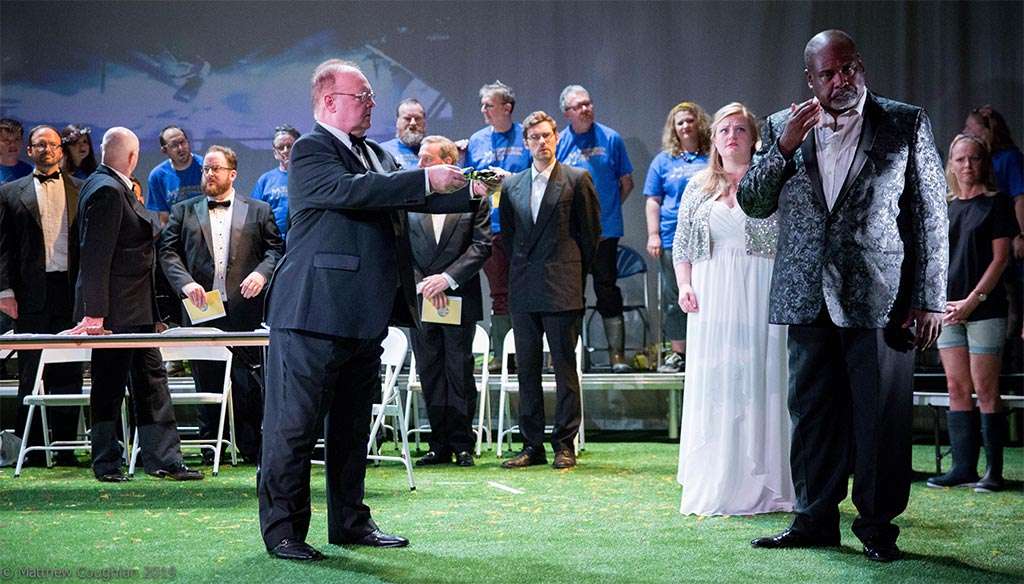 Jonathan Finney (Beckmesser) also made the arrangement for eighteen players, and for the most part it works well and is beautifully played. I suppose the absence of string weight makes the woodwinds unduly prominent, but the chamber sound suits the intimate episodes and the long conversations with great success, and Woodward guides the players through this huge score with impressive insight and flair. It would have been lovely to have timpani, as well as a bit of glitter at the end, but I doubt there’d have been room in the pit. Similarly, the skillfully reduced chorus delivers a surprisingly full, flexible sound, and it’s clear that the big ensembles have been meticulously rehearsed. The last Meistersinger I experienced was the Royal Opera’s baffling staging from Kasper Holten, and Fulham Opera gets infinitely closer to the heart and soul of this wonderful work.