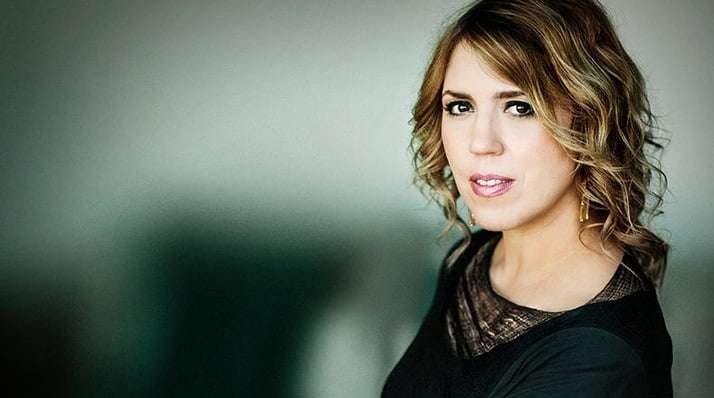 In choosing three such well-known works, this fiery and politically-charged Venezuelan seemed set on showcasing her credentials as a ‘serious’ artist. Yet the Mozart failed to make much impression, Gabriela Montero’s take-it-or-leave-it approach short on charm and, in the first movement, outstaying its welcome with both repeats honoured, which served only to emphasise the monochrome approach, with unvaried dynamics and phrasing and a general blurring of figurations, glossing over the melodic gems contained within. The Finale, more allegro than the marked Allegretto, provided little room for Montero to be playful, or joyful.

But it was a far more idiomatic Montero we heard in Beethoven. The ‘Waldstein’ started with rugged authority. The opening quavers were alive, chomping at the bit, making the transition into the semi-quavered propulsion a thrilling experience, and there was much to admire in the varied colours that Montero drew from the Steinway. Unfortunately the opening of the slow movement was marred by rude and insistent coughing from several audience members and the music never quite found its ethereal and enigmatic centre. Things took off again in the Finale, though at times verging on virtuosity for its own sake.

Given the huge performance-history of Kreisleriana (Horowitz, Argerich, Lupu, to name but three giants), it was hard to see Montero’s reading as more than work in progress. There were many felicities but notably lacking was the required bite and febrile nervousness. The clangourous over-pedalled sound for the opening conveyed a sense of the music being projected outwards, rather than being inhabited from within, with all the disquiet and torment that this should imply; and, later, inwardness and agitation were missing. It was too safe, too middle-of-the-road, and if this immensely challenging work, both technically and structurally, is to come off then risk-taking and edge-of-the-seat playing are both required. That said, in the concluding pages Montero found something miraculous, a revelling in the strange sonorities, and an eking out of regret, loss and painful love. It was the most magical playing of the evening.

And then, relaxed and smiling broadly, Montero chatted happily about her love of improvisation. First she was keen to play on Messiaen’s soundworld, having heard her friend Angela Hewitt in Turangalîla at the Proms the night before; and so we were convincingly eased into Messiaen’s sparse harmonies, delicately repeated notes, and ostinato and locomotive-like rhythms, and cascades of massive chords. It was remarkable musicianship and evidence of formidable intellect, if presumably never to receive another outing? A lady then proposed ‘I Got Rhythm’, which Montero quickly picked up. We then got the full works – first Montero’s trademark quasi-Baroque treatment of George Gershwin’s tune, complete with dancing counterpoint and then, with a nod to Art Tatum, into a swirl of jazz-infused rhythms: musical swaggering of the highest order.