Britten
The Turn of the Screw, Op.54 – Opera in a Prologue and two Acts to a libretto by Myfanwy Piper after the story by Henry James [sung in English, with English surtitles] 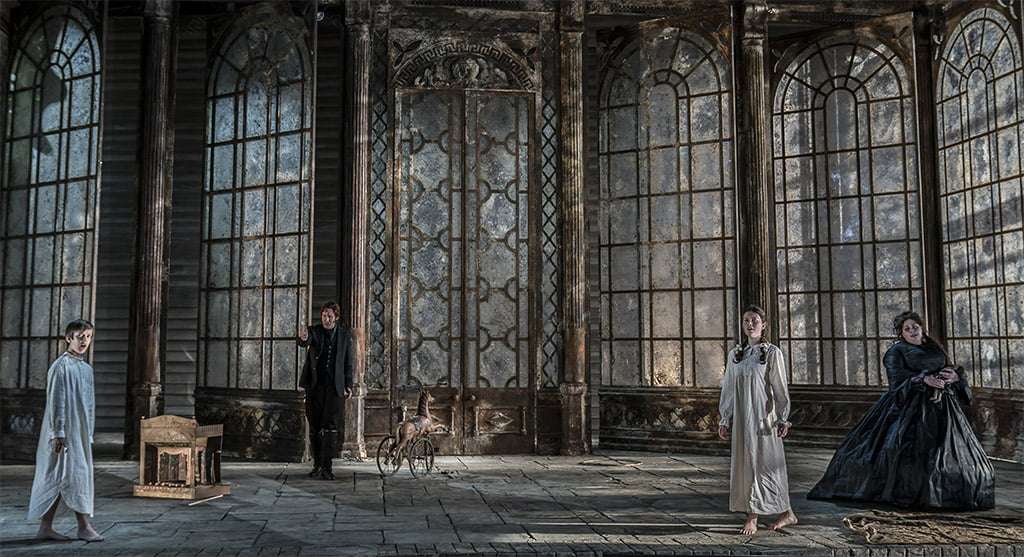 Louisa Muller’s new production of Britten’s nerve-shredding take on Henry James’s The Turn of the Screw scores almost on too many points. The glass exterior of Garsington’s Opera Pavilion opens out onto sky, parkland, and a lake, so that the audience could just as well be in the park at Bly, the great house where a new governess and the ghosts of a servant and the previous governess do battle over the souls of Miles and Flora, the two isolated, orphaned children who live there with their housekeeper Mrs Grose.

Inside the theatre, Christopher Oram’s set is a masterpiece of noble gothic romance, an orangery on the edge of dereliction in a series of lofty glazed panels that move silently and cinematically to reflect, refract and obscure light, set on the edge of a lake that begins to encroach on to the stage as the ghosts of Peter Quint and Miss Jessell get ever closer to their prey. Oram’s costumes are assertively late-Victorian, with the three women upholstered in pitch-black crinolines, which somehow take the limited options for a solitary Victorian woman in their stride. 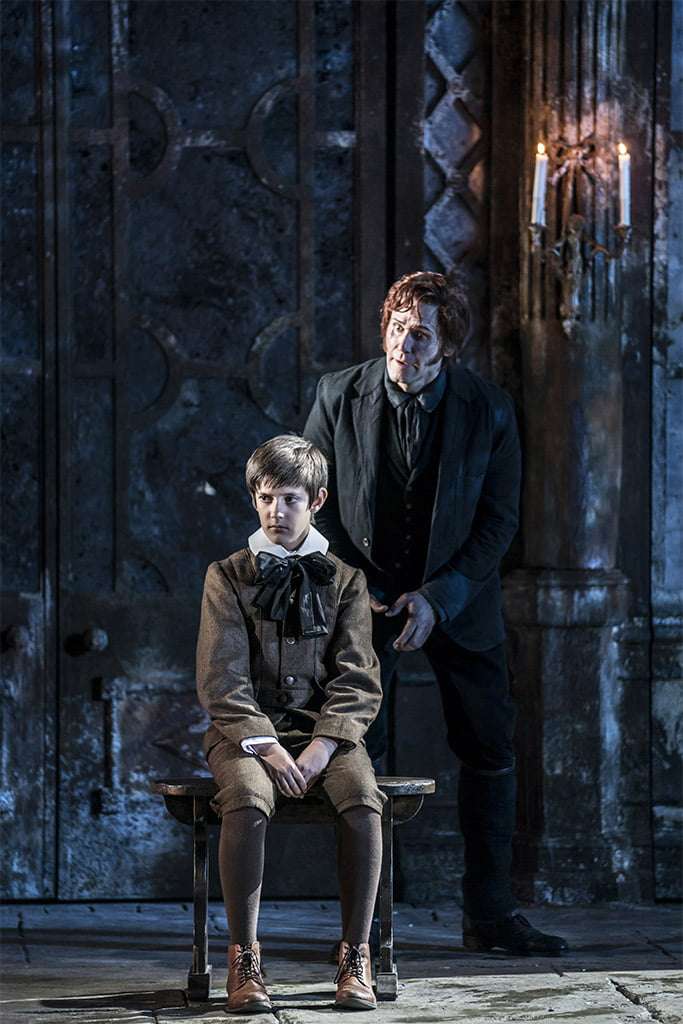 Britten pulled off something remarkable in this ghost-story opera, in that he creates mystery and ambiguity with forensic accuracy – in spite of giving voice to the ghosts – revealing an insider intuition that once again has you pondering what sort of man Britten was. The great strength of Muller’s production is that she lets James, Britten and Myfanwy Piper do the haunting, with minimum intervention on her part, more on the level of observation, such as the moment in the Prologue where the children’s guardian touches the Governess on the cheek, a gesture she obviously treasures, which right at the end is imitated by Miles, with similar results.

Anyone coming to this opera for the first time will be instantly caught up in its accumulating sense of dread through deftly directed characters. Those who know the opera well will respond to the skill with which Muller plots the aspects that take it ever deeper under your skin – child-abuse, the Governess’s possible instability, the unstated certainty that Miss Jessell drowned herself when she became pregnant by Quint (a suicide devastatingly revisited by our last sight of the Governess). Muller’s direction shadows not only our expectations but also the music with infinite care – you know the exact point when the story turns unequivocally sinister, and the ghosts become pro-active; and I wonder if I have seen the Governess’s increasingly fragile hold on reality better portrayed.

Malcolm Rippeth’s lighting comes into its own in the second half, when the sun has set, but he must have gone down on his knees to give thanks for some of the brilliantly cued natural effects that sun and cloud delivered in part one. There was even a drop in temperature as the story moves to its terrible conclusion. This staging does this creepy masterpiece proud. 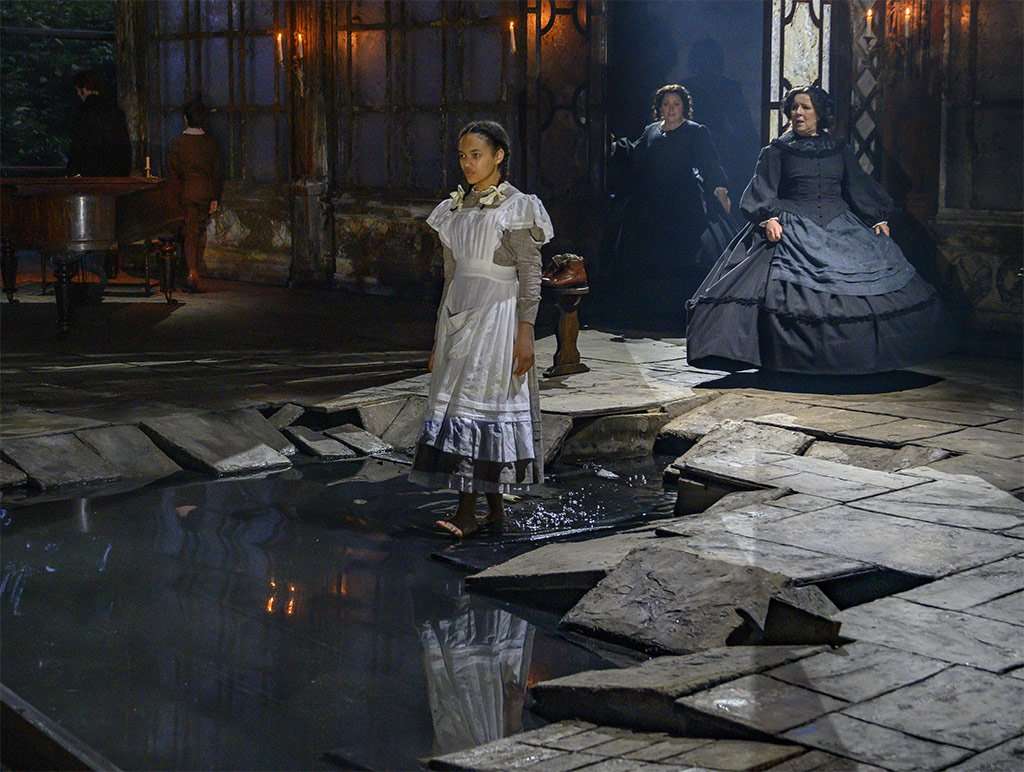 The performances are excellent. You hope that the Adrianna Forbes-Dorant and Leo Jemison aren’t tainted by their being Flora and Miles as they seem to embrace the wickedness that usurps their innocence. Hear Miles’s ‘Malo’ song or Flora’s lullaby to her doll (a fetish figure of Miss Jessell that she drowns in the lake) and be very afraid. Both of them sing with astonishing directness, and in Jemison’s case, an affecting inwardness. You can see and hear Ed Lyon’s Quint grooming Miles with feral, predatory seduction, leaning into Quint’s melismatic wails in a way that’s like Peter Pears via Frank Sinatra, and Lyon’s presence, whether seen or just dimly perceived, is deeply unsettling. It’s good to hear Katherine Broderick’s sumptuous soprano again, and although her Miss Jessell is extravagantly tragic the sight of her trailing through the lake towards Flora in a ballooning crinoline is unforgettable – she is truly pathetic as she clings to Quint.

Sophie Bevan’s Governess is almost too cannily observed for comfort. The fuller and more externalised her expressive singing is, the more you fear for the shocking confusion she generates – a chin-out self-righteousness struggling against desolation and layers of self-deception. Kathleen Wilkinson’s Mrs Grose is imposingly sung and acted, and touching in her exchanges with the Governess. Richard Farnes knows this score well, and he focuses on its epigrammatic lyricism in a way that reminds you of Janáček in its attack and pungency – and it looks as though Britten didn’t know the Czech composer’s music. From the flexible strength of the many instrumental lines to perfectly realised ensembles, the thirteen-piece group is at the centre of the drama.