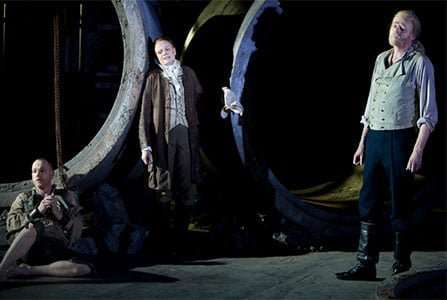 This is Garsington Opera’s twenty-fifth anniversary season, and the fourth in its purpose-build auditorium on the splendid Wormsley Estate, set within the gently undulating Chiltern Hills of Buckinghamshire. This opening production, of Fidelio, has Douglas Boyd, Garsington’s Artistic Director, in the pit; it was he who led the company when this production was new in 2009.

Much is made about Beethoven being the champion of the individual, and Fidelio (his only opera, albeit with a Leonore first version) if often cited as the ultimate in triumph of the ‘one’ against a corrupt regime. This is not quite the case: even our prisoner-hero Florestan has to rely on the prevailing circumstance, which is that he has a friend in a high place that can set him free. Had the King’s messenger Don Fernando been of a different political colour (like the prison governor Don Pizarro) Florestan would never have seen the light of day, literally! In many respects, this undermines the whole thesis of Fidelio, and the absurd story of a woman (Leonore) disguising herself (as Fidelio) so that she can somehow rescue her beloved, and in the meantime become almost married to the daughter of the gaoler Rocco, stretches incredulity to breaking point. 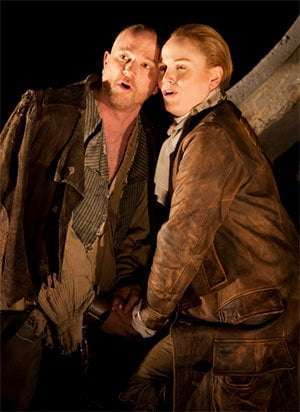 Jonathan Cox’s direction and Gary McCann’s designs are conceived simply and effectively, and the presentation of the story makes the plot obvious. Also of beneficial effect is the natural lighting: the early-evening start time meant that Act One was bathed in sunlight, allowing the prisoners to go out of the auditorium to some form of autonomy in the garden, whereas the start of Act Two was darker, befitting the descent to the cells. This Act is a triumph: each encounter is handled deftly, and the opening-up of the back of the stage area to reveal lit trees suggests neatly the freedom beyond the stage’s confinement. So, the destination of the opera – liberty, Churchill’s “broad, sunlit uplands” – is appositely evoked.

Rebecca von Lipinski’s Leonore/Fidelio was the centre of attention, rightly, aided by her clear and communicative diction. Hers was a caring and unforced characterisation, and she sounded glorious, whether in solo or ensemble: her dual role – Fidelio’s brave efforts or Leonore’s anxiety – was distinguished by her responsive singing and acting. Stephen Richardson’s benign Rocco had in his commanding bass an air of natural authority and rare insight: his pointed remark to Fidelio that he can see the truth in men’s hearts – suggesting that he knew her true identity and intentions – was a standout moment of Act One. 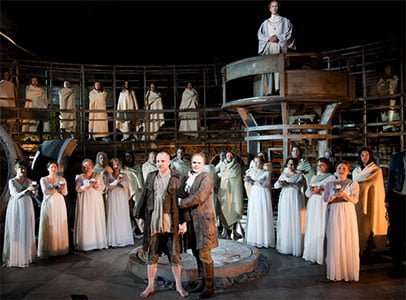 Peter Wedd was an admirable Florestan, defiant and other-worldly in spirit, even if he has resigned his corporal existence to the ashes. Perhaps the occasional struggle with the vocal writing to begin with was apt, making it right that this Florestan awoke in response to learning of Leonore’s identity. Pizarro, the prison governor (made-up to look like Emperor Napoleon, whom Beethoven disowned) laced his bass-baritone with duplicitous commanding. The denouement with the benevolent King’s minister (Joshua Bloom) reminded of that other great duo in conflict, from Verdi’s Don Carlos (between Philip and the Grand Inquisitor): here Bloom made the small part a Heaven-sent glory.

Making more than is on the page of the somewhat inconsequential Jaquino was Sam Furness, very much the handsome chap who wants his girl. That girl was sung delightfully by Jennifer France. This was a well-matched cast, with each member making their characters significant. The Chorus was rousing, the paean to freedom hitting the mark. Boyd conducted the well-sounding Orchestra with singer-friendly sensitivity, and he gave the opera a degree of linearity that it seldom has, atmospheric, heroic, liberating.