Mozart
Idomeneo, K366 – Dramma per musica in three Acts to a libretto by Giovanni Battista Varesco after Idoménée by Antoine Danchet [sung in Italian, with English surtitles] 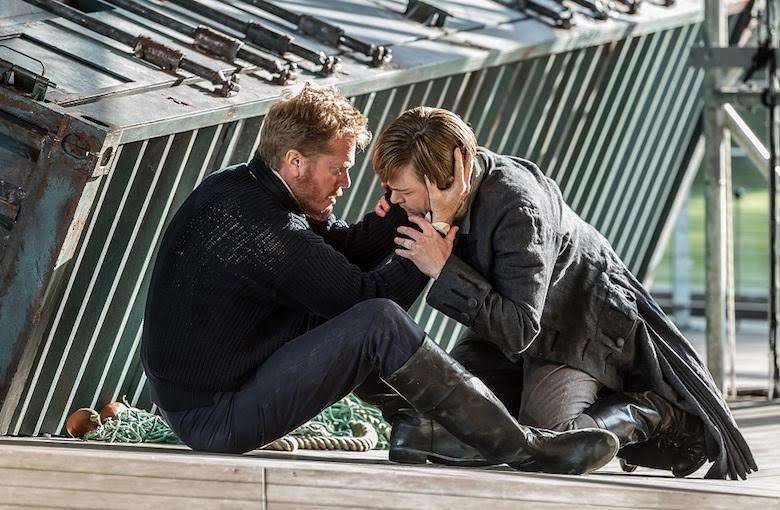 On the premiere of Idomeneo at the Munich Residenz in January 1781, the highest praise was reserved for the set designs. A notice in the press did not even mention Mozart by name, merely stating that the “author, composer and translator are all natives of Salzburg … the decors were masterpieces by our renowned theatre designer, court Councillor Lorenzo Quaglio…”. If, now, the highest accolades cannot be awarded to Hannah Clark’s sets for Tim Albery’s new production for Garsington Opera, this is because the musical credentials are so great that they have to be placed above everything else.

Albery sets the action across the eighteenth-century and modern day. The somewhat sloping stage hints at sand dunes, revealing that we are by the sea-shore for the opera’s duration. There are two industrial-scale containers. The Trojan prisoners have been roughly packed into one of them, while the other is Ilia’s apartment; it has a plush interior, so she has been treated well by the Cretans. Across the staging, this container encloses a series of spaces, to present the different scenes; all are eighteenth-century in style. Beyond this the chorus and the minor principals wear modern if provincial clothes to depict a community of fishermen and workers. Conversely Ilia, Idamante and Elettra wear garments from earlier times, although these frequently possess muddied hems. Idomeneo alone wears different sets of attire that cross both states.

The enactment is not entirely unproblematic because the concept has little to say about the characters or the opera’s themes. It does, however, provide an excellent infrastructure to enable events to be rendered effectively as the large performance space remains uncluttered. During ‘S’io non moro a questi accenti’ Ilia and Idamante cover a lot of ground as they move around, and yet at important moments they remain relatively still. ‘Andrò, ramingo e solo’ is similarly effective as the quartet create various formations. At one point during it Elettra seizes Idamante’s sword only for him to snatch it back, which reveals her desire to possess him and his resistance. There are many other similarly intelligent touches throughout. Elettra sings ‘Idol mio’ laden down with suitcases and while trying on jewellery. In the process she displays the type of excitement that any person today might show at going on holiday with their lover. 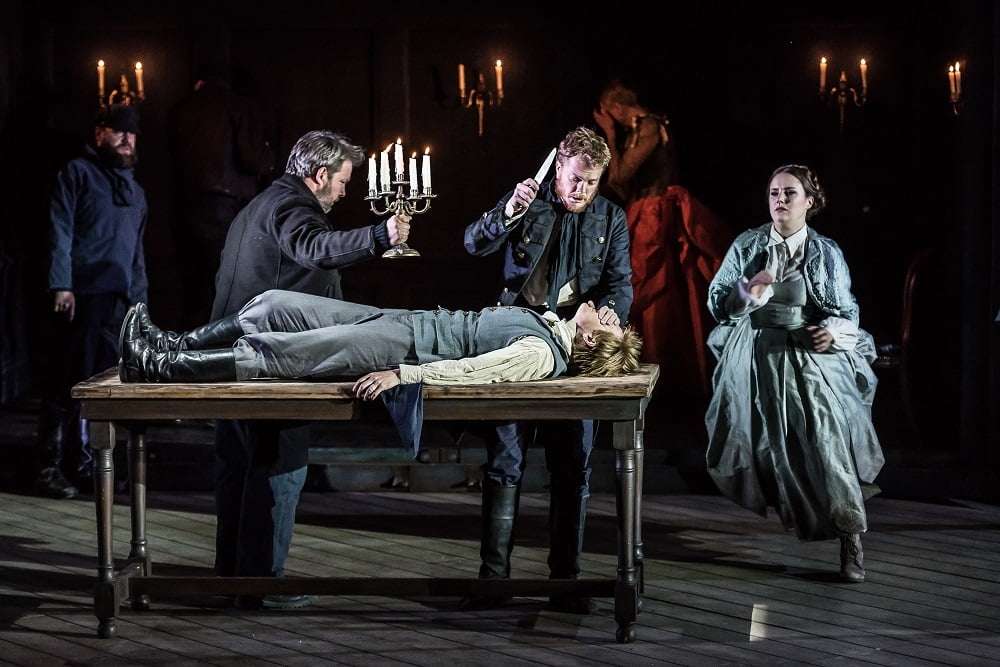 When Idamante and Elettra are about to set sail, chorus-members place ex-voto offerings at the front of the stage, and here and elsewhere they break into couples and groups that emphasise that we are looking at a genuine community of Cretans. The storm is effectively rendered by having the stage literally split in two while several singers spew up black poison, for they are infected with the plague.

Although the visual elements are generally kept to appropriate levels, there are a few occasions when they are excessively distracting. Workers cleaning up the poison at the start of Act Three draws attention away from Ilia’s ‘Zeffiretti lusinghieri’, and leaves one thinking that they had eighty minutes to get rid of it during the interval. Nevertheless, it says something about the strength of the staging that, even at its weaker moments, it is far superior to Katie Mitchell’s production for English National Opera in 2010 or Martin Kušej’s for the Royal Opera in 2014. Indeed, as we watch body-bags being carried around the stage we are made acutely aware of the hierarchies inherent in the scenario. Much as we can appreciate the injustice and cruelty of seeing innocent Idamante having to face death, it is noticeable that a thousand people of more lowly status have to die before Idomeneo concludes that he needs to act.

Tobias Ringborg believes that Idomeneo, Mozart’s first mature opera, is exciting precisely because it combines music that is progressive and rather old-fashioned. He relishes the opportunity to tackle such a varied score, and he enables the various details to breathe while maintaining excellent balance. His overarching achievement, however, is to allow all of the disparate elements to work on their own terms while facilitating a coherent entity. 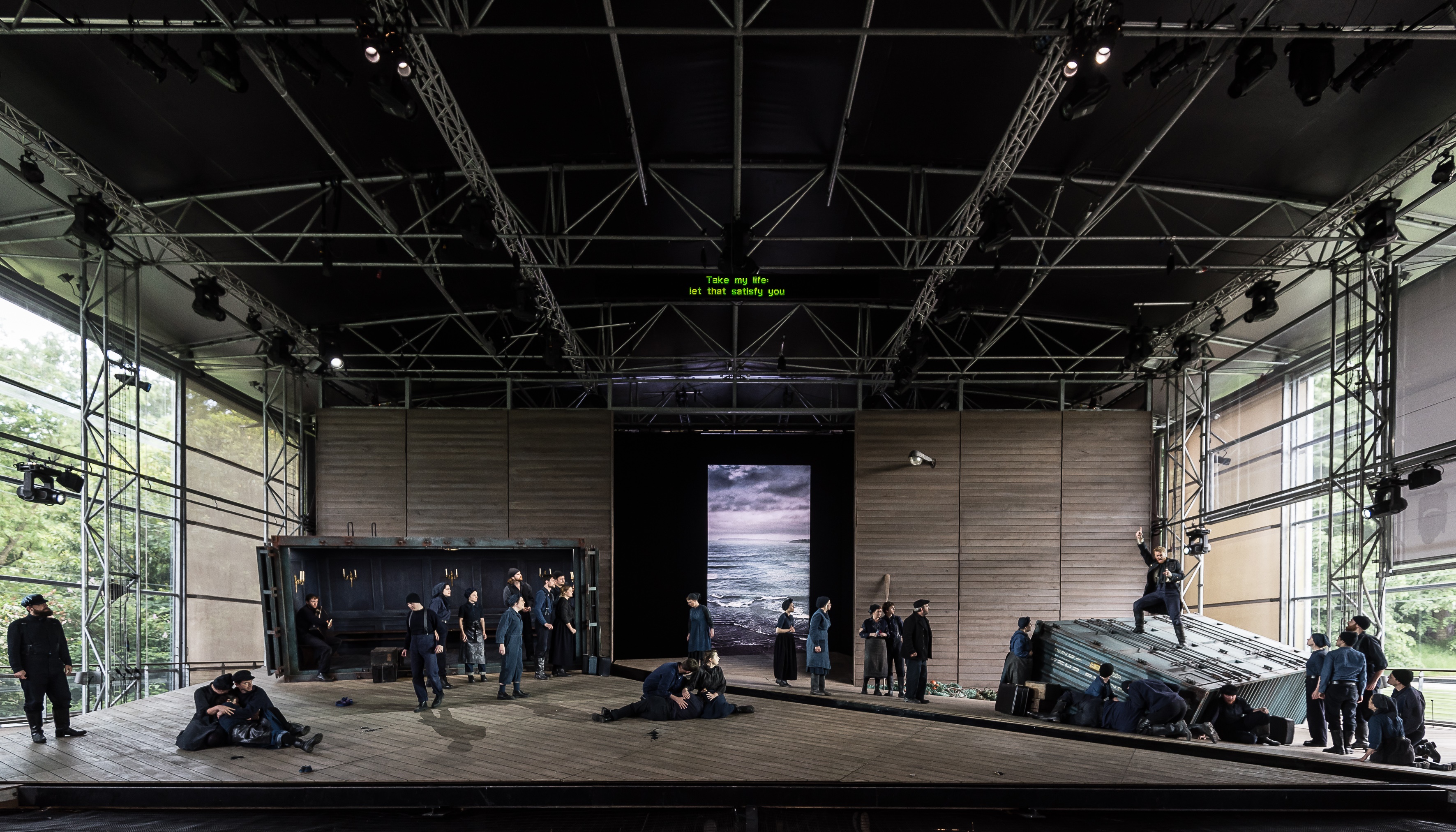 The singing is exceptionally strong, and the three female leads are superb. The portrayals of Louise Alder as Ilia, Caitlin Hulcup as Idamante and Rebecca von Lipinski as Elettra are all characterised by a purity of line. There is a beautiful sweetness and lightness to Alder’s tone, while it is the impeccable shaping of Hulcup’s phrasing that makes hers the standout performance; there are various opinions on whether the castrato role of Idamante (in the original version) is best served by a mezzo today, but surely no-one listening to Hulcup would want to hear anyone else. Elettra is not supposed to be a sympathetic character, but von Lipinski renders her lines with such flashy charm that in ‘Idol mio’ we really want things to work out for her. Her exceptionally nuanced account of ‘D’Oreste, d’Ajace ho in seno i tormenti’ is extremely powerful.

Toby Spence is very strong in the title role, with a voice that is beautifully rich when at its most expansive, and equally adept at tackling the vocal acrobatics. He is a superb actor, being visibly moved when Ilia sings ‘Se il padre perdei’ to him and, once it is over, returning to his anxious concerns. There are no weak links in the cast and Timothy Robinson as Arbace, Robert Murray as the High Priest and Nicholas Masters as Neptune all play their parts to the full.

The Chorus is also splendid, and it assumes a major role here. Elettra’s final aria feels much more a public display than usual as everyone gazes on and reacts. It is extremely moving to see her poised to thrust several knives into her body, only then to let them drop and stagger off sobbing. Ringborg decided to include this aria, even though it only comes from the appendix to the published score, but elsewhere he makes many cuts. This means there is no closing ballet, but the sight of Idomeneo, having to face up to his mortality as everyone celebrates, is enough to provide an arresting ending.