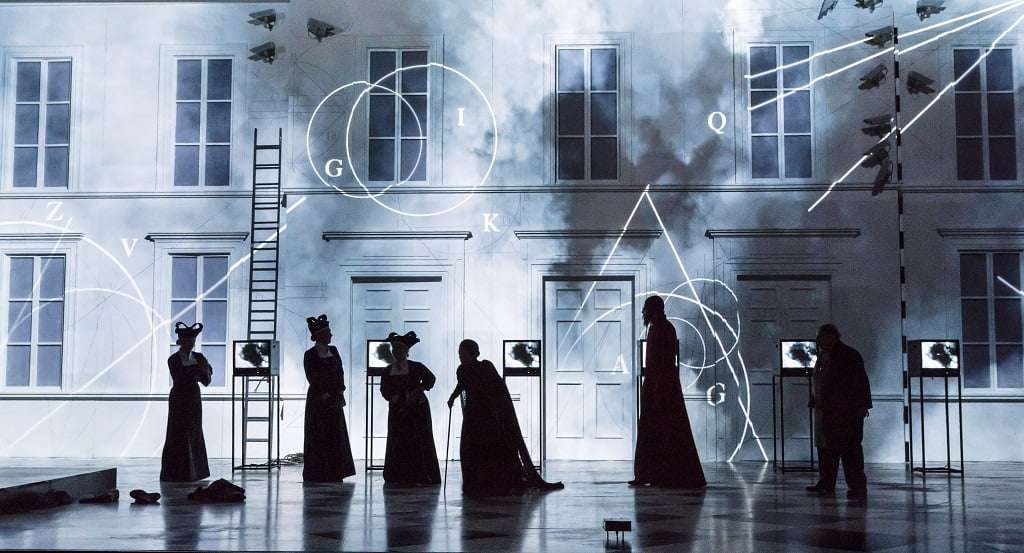 Greeting you as you walk into the auditorium at Garsington’s Magic Flute is a continuation of the landscape garden’s topiary, its symmetrical boxed hedges fronting an imposing white facade. It’s a neat trick to blur interior and exterior realities (working particularly well in a building with two glass sides) and its juxtaposition enhances Mozart’s mélange of pantomime hilarity and hierarchical solemnity, the sublime with the earthy. Netia Jones takes some liberties with the staging yet illuminates the work’s darker aspects with plenty of imaginative gestures and knockabout and, at times, bizarre humour. During the Overture, a blindfolded Tamino enthroned in a bathtub is pursued not by a serpent but by rubber hosing belonging to hydro-electric therapy – a comical initiation that predictably goes wrong. Entrapment seems to be Jones’s starting point.

Dominating both Acts is the paraphernalia of freemasonry (square and compass providing a visual reminder of Mozart’s own association with this society) with Act Two set in a David Lynch-style Lodge with lookalike brothers attired in moustaches and 1970s’ glasses. To the blatant symbolism Jones adds distracting references to Peter Greenaway’s The Draughtsman’s Contract and the television adaptation of Margaret Attwood’s The Handmaid’s Tale. In fact, this Magic Flute, Jones’s Magic Flute, is so burdened with meanings that Tamino’s path to Enlightenment is in danger of losing direction and dramatic potency.

In at least two instances dramatic plausibility misfires: Benjamin Hulett’s noble but very earnest Tamino delivers an emphatic performance, yet his Act One portrait aria is directed squarely to the audience with barely a glance at the video of Pamina held by one of the Three Ladies – his distance removing any sense of real engagement. There’s plenty of ardour in his robust singing but the manner is stiff. Later, when Jonathan McGovern’s rustic Papageno contemplates suicide, believing he’s been abandoned by Papagena, there are awkward pauses before her miraculous transformation as a young beauty. McGovern is not a natural comedian although he eventually wins our affection in Act Two with genuinely funny exchanges between himself and the Elders. Towards the end his heavy baritone gains in lyrical charm and he fashions a moving soliloquy to Papagena.

Louise Alder’s compassionate Pamina produces some of the best singing and gives a standout rendition of the despairing ‘Ach, ich fühl’s’. Sen Guo’s diminutive and menacing Queen of the Night brings authority to the role, flame-grilling her coloratura arias with complete assurance. A warmer tone is found in James Creswell’s Sarastro, vocally commanding with a luxurious depth of tone you could bathe in. Adrian Thompson and Richard Burkhard are on good form respectively as the would-be rapist Monostatos and the Speaker. Memorable are the three cherubic boys (their roller-skating neatly done), three finely-tuned and musically sensitive Ladies, and the tight ensemble of the Chorus.

Conducted by Christian Curnyn, the Orchestra gives efficient, well-balanced support, wind instruments notably ear-catching and imposing for ‘March of the Priests’, but underlying textures and phrasing would benefit from a lighter touch for a production swamped by a surplus of ideas, leaving more questions than answers, but musically reliable.