Strauss
Capriccio, Op.85 – Conversation Piece for music in one Act to a libretto by Clemens Krauss & the composer [sung in German, with English surtitles]

Richard Strauss’s Capriccio is the ultimate natural fit for summer opera in the country. This “conversation piece”, Strauss’s final stage-work, is set in a chateau near, if not too near, Paris, and its impact depends greatly on an Agatha Christie-like isolation from the real world. The three Gs – Glyndebourne, Grange Park and Garsington – have mounted it, and now Garsington is back for seconds in collaboration with Santa Fe Opera.

Strauss’s original time-frame is Rococo France, getting very close to the French Revolution. Tim Albery has moved it to the 1940s, when Capriccio was written and premiered (in wartime Munich), but hasn’t imposed an agenda of Strauss fiddling while the world burns – he lets the composer’s misery over the death of European values speak for itself, which it does in music both self-referential and self-reverential, with lots of parody and pastiche, and high on nostalgia. Tobias Hoheisel’s set combines Rococo extravagance and cool modernist elegance with all the panache of a glossy Interiors magazine photo-shoot. It provides a setting of aristocratic glamour (and fragility, if that’s what you want) for the Countess Madeleine, her brother, her composer and poet suitors, a theatre director and a famous actress to work themselves up into scorching artistic tizzies over the primacy of words or music – prima la musica, dopo le parole is this opus’s refrain – evolving into eloquent, sometimes furious, arguments over aesthetics and culture, while, mirror-like, providing material for an opera – as it happens the one unfolding before us – of impossibly elevated sophistication, with the denouement left hanging. 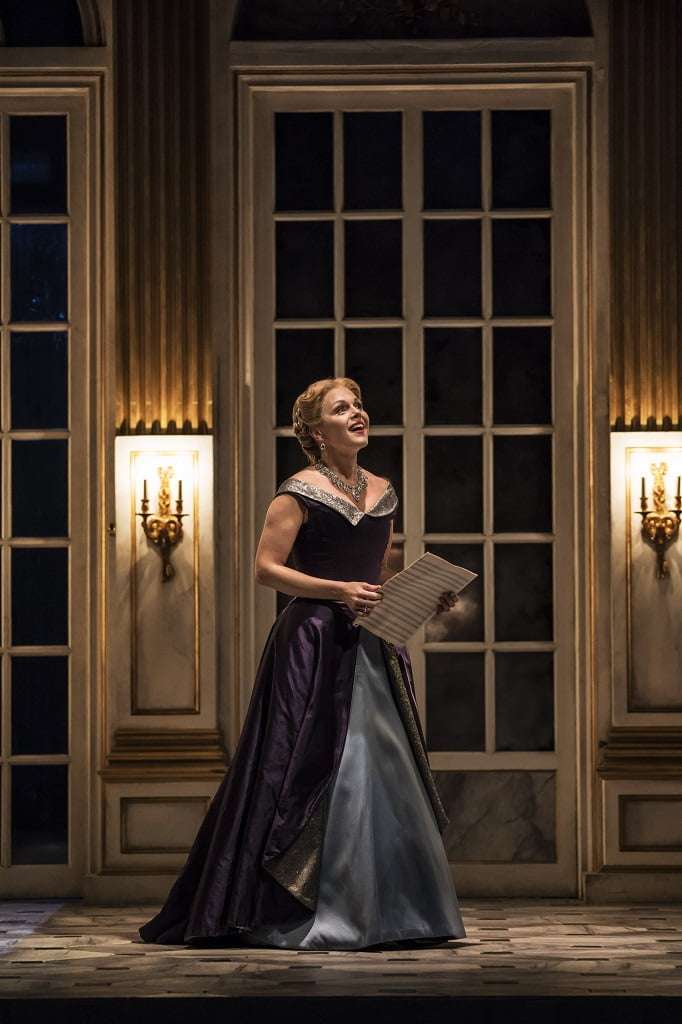 The whole chateau-in-the-air could implode with cosy self-satisfaction, but Albery, paradoxically, defers to the words’ wry, occasionally laugh-out-loud humour in a way that leaves us in no doubt (as Strauss intended) about the outcome of this aesthetic dilemma, and he keeps the erotic charge between the Countess (who represents ‘opera’) and Flamand and Olivier simmering nicely, so nicely, indeed, that the two passionate kisses she enjoys with each of her lovers are just too explicit. Once again, though, I succumbed to the virtuosity of charm and artifice with which Strauss balances all the strands of the comedy, honoured with subtle efficiency both by Albery’s direction and by Douglas Boyd’s neatly tailored conducting, which asserts the big orchestral moments but is just as fine in supporting the detailed yakking on about Art.

Miah Persson’s beautifully judged Countess is discreet without a hint of sphinx-like remoteness, and with the occasional revelation of her goddess status. She gets the conversational tone spot on, and her big instances, the ‘Moonlight’ serenade especially, sweeps you away. Sam Furness’s tenor is on glorious form for Flamand, the geeky musician with an idealistic passion, and he contrasts well with Gavan Ring’s sharply observed portrayal of Olivier as more considered and worldly. Andrew Shore’s La Roche, the conservative director who knows what audiences want, is a triumph in his long solo about the meaning of theatre. Sly, discreetly overbearing, and at times very funny, Shore never falters. As the Count, William Dazeley provides a corrective to all the arty fuss with admirable directness, and Hanna Hipp is excellent as the wise, flamboyant Clairon, the grit Strauss’s conceit needs to become a pearl. Benjamin Bevan is an inscrutable Major-Domo, and Graham Clark gives a lovely cameo as Mr Taupe, the prompter everyone has forgotten. The eight servants peep round doors and peer through windows wondering why their betters are getting so agitated, in the process briskly etching in the social divide, and from the opening sextet from the Royal Academy of Music string ensemble to the dreamy horn solo in the ‘Moonlight’ music, the playing is big on detail and style, as indeed is the whole, impeccable evening.