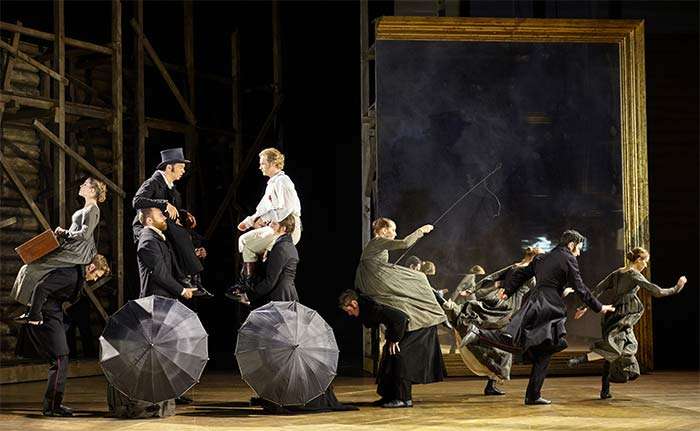 Michael Boyd’s new production of Tchaikovsky’s Eugene Onegin is only the former RSC artistic director’s second opera staging – the first was Orfeo for the Royal Opera at London’s Roundhouse last year. You’d think that Tchaikovsky’s melancholic sampling of Pushkin’s romance of rejection and missed opportunities would be a directorial gift, but Boyd has over-conceptualised it, in the process consigning both the title role and hapless Tatyana to an insurmountable repression that doesn’t sit squarely with the music.

Apart from the fine period costumes, Tom Piper’s set is a minimalist backdrop of five wooden screens that can be moved to form the interior of a room or a glittering St Petersburg palace and which do not impede Boyd’s generally spare deployment of the cast. He likes nothing better than to clear the broad stage to isolate a particular character or group, ensuring that we grasp Pushkin’s and Tchaikovsky’s pessimistic appraisal of human frailty.

Occasionally it is very powerful – the quartet of Madame Larina, her two daughters and Filippyevna at the start of the opera spoke volumes about the impotence of life for a well-to-do but impoverished household of women in the Russian countryside – but the all-important ‘Letter’ scene when Tatyana throws caution to the wind lacked that flash of spontaneity. Boyd’s direction of the chorus, moreover, veered from inert to sub-Brechtian posturing. And, while he acknowledged the awkwardness of the two-year time-gap between Lensky’s death in the ‘Duel’ scene and Onegin’s return to St Petersburg (ideally the interval should be after the duel, but that makes the first part almost two hours long), the tableaux vivants of Onegin’s travels – the chorus disporting themselves as coach and horses and a sailing ship – were a frankly hammy adjunct to the ‘Ball’ scene’s Polonaise. 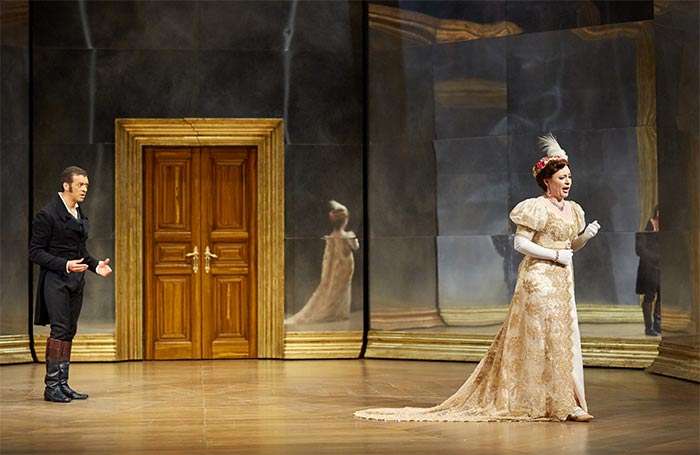 Similarly, it was worth showing Onegin haunted by the ghost of Lensky, with lots of Banquo-like gore, dragged up as Olga – the two lives that he has irredeemably destroyed – but again the point was made with thumping obviousness. Set against that the magnificently uncomplicated assertion of the mystery of love from Prince Gremin or its unadulterated joys from Lensky in Act One, and you get an idea of the massive lurches of emphasis.

In a particularly strong cast, the main casualties of this lack of focus were Tatyana and Onegin. In her role debut, Natalya Romaniw sang beautifully, with a soaring, confident top voice of considerable distinction. Dressed in simple black, she had the aura of The Seagull’s Masha “in mourning for her life” that worked against Tatyana’s timidity and detachment. The ‘Letter’ scene was finely paced and interestingly self-contained, and I loved the bravura of the orchestral postlude that defines what she has done.

Roderick Williams, also a role debut, was so discreet in the first part that it was easy to overlook the detail and humour he brought to Onegin’s first meeting with Tatyana and his casual cruelty later. Williams sang with his customary, unforced directness and seductive tonal beauty. He didn’t quite negotiate Onegin’s collapse of identity when he in turn is rejected by Tatyana, but I suspect that was more to do with fulfilling the directorial remit. 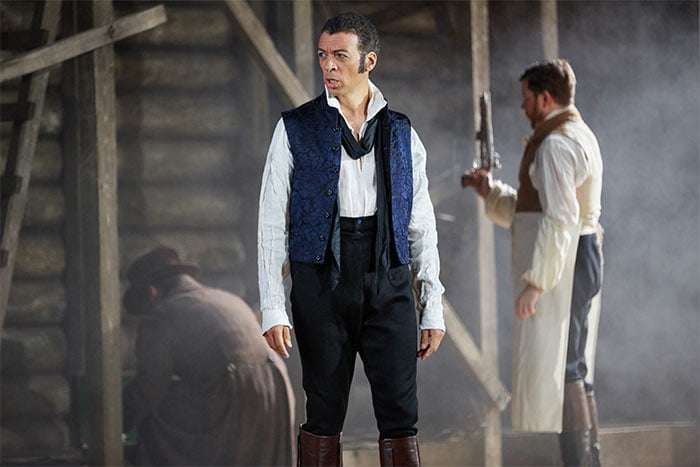 The opera’s overwhelming emotional blast was amply delivered by Oleksiy Palchikov’s unstintingly powerful, poetic Lensky, tear-jerking in his Act One love-song to Olga and opening the floodgates during his great ‘Duel’-scene aria (Boyd’s staging here is spine-chilling). He rarely forced his sweet, lyrical tenor into distorting loudness, and the quietness of his voice was inescapably heart-stopping. Jurgita Adamonyté’s Olga added a natural, flirtatious corrective to her gloomy sister, and her consistently even and full lower register was a great pleasure.

Kathleen Wilkinson and Louise Winter broadened the respective roles of Filippyevna and Madame Larina into telling portraits, Mark Wilde was an affecting half-sad, half-comic Triquet, and Brindley Sherratt anchored the ‘Ball’ scene with a wonderfully interior account of Prince Gremin’s aria, expressing to Onegin the contentment he’ll never have.

Whatever misgivings I may have about the staging’s focus, which threatened to turn it into a numbers opera, the music’s cohesion was assured in Douglas Boyd’s conducting. Garsington’s artistic director has an orchestra-insider’s natural command of how the score moves from chamber rapport to symphonic sweep, and the sound he drew from his players was unobtrusively clear with some superbly expressive wind-playing.I hope the summer weather is less bitingly cold when Onegin is screened free in rural coastal areas, including Skegness, Ramsgate, Burnham-on-Sea and Grimsby.