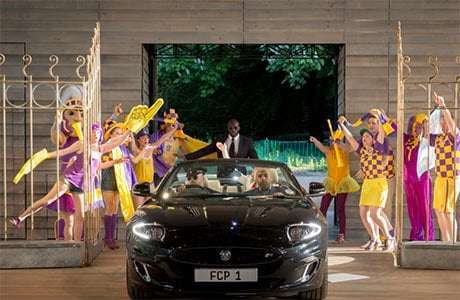 Garsington Opera is always a good bet for a night of seasonal fun, and regular director Daniel Slater has fashioned another sunny entertainment for the company – this time from the ticklish Singspiel that is Die Entführung aus dem Serail (The abduction from the Seraglio). Mozart’s comedy about two men who rescue their beloveds from the harem of a Turkish Pasha is hard to stage these days: the humorous flam dreamed up by librettist Gottlieb Stephanie has not happily withstood the passage of time. There is little risk of boredom in Slater’s witty updating though: he dares, he double-dares, and he stifles the purists’ protests with a concept as enchanting as it is outrageous.

Selim is a wealthy Russian oligarch who owns an Italian football club, and tonight his Serie A team is due to play in the Champions League final. Pedrillo is a wide-boy British sports journalist who passes off his American friend Belmonte (“Monty”) as a football coach. Their respective better halves, kitchen goddess Blonde (Swedish) and the lovely Konstanze (Spanish), languish in the luxury of Villa Seraglio under the baleful eye of Osmin, the rich man’s ruthless enforcer.

It shouldn’t work but it does. The characters’ inter-relationships survive all this reinvention pretty much intact, and there is joy not just in Slater’s wit but in the ingenious surprises designer Francis O’Connor has built into his pop-up sets. Together they ensure that the audience happily buys in to the opera’s nonsensical happenings. There are small but significant changes to the score, but these have not unduly damaged the musical experience. Arias for both Blonde and Konstanze have been moved to later points in the action; Belmonte loses one of his altogether; and Act Three gains an overture in the form of an aptly-chosen Contredanse. 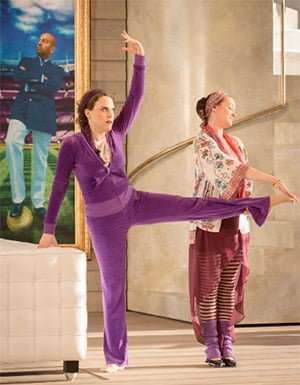 A feather-light account of the Overture proper (one of Mozart’s most irresistible) announced both the superb modern instruments of the Garsington Opera Orchestra and William Lacey, a British conductor whose profile is higher in Leipzig and the USA than it is in his homeland, as ideal musical guides on this improbable journey. The cast is a strong one, with two of Britain’s leading Mozart singers, Matthew Rose (Osmin) and Mark Wilde (Pedrillo), sharing acting honours with the non-singing Selim of Aaron Neil. Tenor Norman Reinhardt had some good comic moments as Belmonte – bumbling, all-American and prone to careless talk when he pretends to be a football expert (“at the intermission it was one point each”) – and he sang attractively, albeit with a lack of burnish in his voice.

Slater keeps his two excellent sopranos busy while they sing: the ball of energy that is Susanna Andersson bakes a cake from scratch during Blonde’s entrance aria, “Durch Zärtlichkeit und Schmeicheln”, while the charismatic Rebecca Nelsen as Konstanze goes one – nay, two – better, allowing her personal trainer to run her through the health gamut from Tai Chi to a fish pedicure during “Traurigkeit ward mir zum Lose”, then delivering the opera’s most famous aria, “Martern aller Arten”, while Osmin straps her in for a spot of jolly torture.

It all adds up to a delightful evening of sublime music (the score is one of Mozart’s richest inspirations, even if the storyline isn’t) and inventive comedy. Sight-gags abound as a lift, a fifth-floor window and a Jaguar car all pop out from O’Connor’s advent-calendar stage. The production’s only downside is the grinding gear-shift between the characters’ spoken dialogue – especially Mark Wilde’s vernacular – and their exquisitely-enunciated singing. When everyone can deliver such perfect German, Slater’s Berlitz-Babel dialogue just sounds weird.