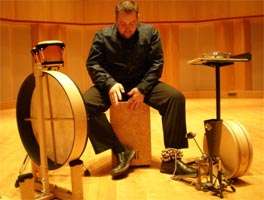 From the very beginning of Gene Koshinski’s debut percussion recital it was clear that he possessed what can only be described as ‘fiery chops’. The opening work, Nebojsa Jovan Zivkovic’s Fluctus (for marimba), demands extreme speed and precision; Koshinski was able to deliver on both counts.

Koshinski is also a composer and the program featured three of his works, two of which were written and premiered last year. Echo, for which Koshinski enlisted the talents of fellow-percussionist Michael Dobson, was composed in 2006 and is for two multiple-percussion set-ups, one of which was based in the projection-room behind the audience to create the echo of the title. The work suggests a background in drum lines and many cross-rhythms, in the latter respect resembling Michael Gordon’s XY.

The final work in the first half was also by Koshinski: And so the Wind Blew, in which he was joined by a different partner, Benjamin Toth. The work has a notable set-up, with numerous wind chimes, vibraphone and drums; the second part uses crotales, bongos, an ocean drum and, most interestingly, a set of five china bowls, pitched to play with the vibraphone. And so the Wind Blew is much more of a soundscape than a technical exercise and builds up over a period of time. The high point was when both musicians were playing the tuned drums together with scattered notes on the crotales and vibraphone. There was also a tam-tam that despite being used sparingly was the most effective instrument, being pitched perfectly within the key of the piece.

After the interval Koshinski moved back to the marimba for two technically difficult works, including the Vieuxtemps Capriccio. Both required four mallets. He then continued to display a seemingly unending bag of tricks with two works featuring spoken voice. Piru Bole by John Bergamo specifies an instrumentation including frame drums, a pandeiro and a cajon, as well as boles, the Indian vowel sounds that are used when teaching rhythms. This and Stewart Saunders Smith’s Songs I–IX were exciting to listen to.

The recital concluded with Koshinski’s Song and Dance, which features a soundscape painted with amplified thumb piano (kalimba) before moving into an intense movement (‘Dance of the Drums’) which gave the concert the finale it deserved. Koshinski was joined by Tim Broscious.

Koshinski’s works occasionally seem to lack direction while tending towards repetitiveness but nevertheless were entertaining and maintained attention. As a performer, Koshinski is versatile and talented, but there was a lack of communication with the audience. Perhaps the space in the printed program given over to lengthy biographies could have been more usefully occupied with some information about the music. The recital, made possible by the Imagine Grant Program at the University of Minnesota (where Koshinski teaches), was a success and a fantastic way to warm up on a cold evening in New York.