Gerald Barry
The Importance of Being Earnest – Opera in three acts based on the text by Oscar Wilde [co-commissioned by Barbican Centre & Los Angeles Philharmonic: European premiere; concert performance]

Dublin-born Oscar Wilde’s play was first staged in 1895 in London. It hasn’t lacked for productions since, its well-known story and quotations brought to silver-screen permanence in 1952 in the classic Anthony Asquith-directed film with a cast including Michael Redgrave, Michael Denison, Joan Greenwood and the inimitable Dame Edith Evans (“a handbag?”) as Lady Bracknell. (There have been two subsequent movie versions.) The Importance of Being Earnest is now a scintillating opera from a native of County Clare, Gerald Barry (serendipitously born in the year that Asquith’s motion picture was released), one Irish creator paying homage to another.

The Barbican Centre attracted a large and enthusiastic audience, one palpably involved with the dramaturgy, to this European debut conducted by Thomas Adès, who also led the world premiere in Los Angeles exactly a year ago. Suffice to say that anyone accustomed with the story (however familiarised) will remain thoroughly at home with the scenario as now set to music; and that anyone new to the narrative should have been able to grasp it easily enough: quick-paced and faster the action may be, but the words are Wilde’s (although Barry has resisted including all of the famous lines) and the yarn is straightforward (Wilde subtitled his play “A Trivial Comedy for Serious People”), and for all the rapid-fire musical and speaking challenges that Barry throws at the protagonists, the singers’ gave us admirable enunciation blessedly enhanced with surtitles and stage directions. 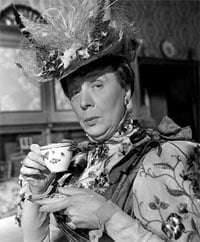 Stand and deliver this presentation may have been, but a real story with real people was enacted and became enthralling. Wilde’s original is a farce of changing and conniving identities, the young people with love and marriage on their minds, Wilde satirising Victorian social conventions and upgrading the magnitude of tea and cucumber sandwiches and espousing the etiquette needed for eating muffins. Lady Bracknell remains formidably aristocratic if – as sung by a man (for which there are precedents in ‘straight’ productions) – at times more akin to the commandant of a German prisoner-of-war camp, Alan Ewing barking his indignation and finding the lowest notes to great effect, not least with the simple yet significant response of “Ah”.

As ever with this quirky and edgy composer, Gerald Barry’s score is engaging and unpredictable (all surprises gratefully received), energetic and propulsive, sonorous yet bristling with detail, the pages stuffed with notes if never overwhelming. Stravinsky is a particular influence, here embracing Pulcinella and Agon without aping them, Barry’s penchant for parody and pastiche to the fore, and he acknowledges a crib from Schoenberg’s ‘Farben’ (from Five Orchestral Pieces, Opus 16), and also with a lyricism that could be touching at times. The instrumental ensemble may consist of ‘only’ twenty-one players but the sound is immense, the colour-palette wide (the woodwinds are doubled from piccolo down to contrabassoon), with piano and celesta and a percussion section that is not gratuitous but leaves its mark (not least with the smashing of forty-eight dinner plates, Greek Wedding style, to underline a temper tantrum, that recalls the annihilation of crockery in Ligeti’s Aventures and Nouvelles Aventures). Wellington boots, a gun, a telephone (landline, old-type ring) and megaphones should also be mentioned!

The work kicks off with a piano solo (pre-recorded by the composer), Algernon is playing his thrashing-around arrangement of “Auld Lang Syne”. From there Earnest is a rollercoaster of music-theatre, just over eighty minutes’ worth, a length that feels ‘just right’ and with an electrification that sweeps the listener along (only an extended passage of horn trills seemed an overdose), sets, costumes and acting not missed. This was a remarkable realisation of a pungent and pulsating score. Whether singers or players, they were all stunning. So – invidiously – is there anything that Barbara Hannigan cannot do? And the brass-players, with so many tongue-twisters to negotiate and very little let-up, were simply remarkable (but so was the entire BCMG, whistling foot-soldiers at one point). Thomas Adès’s baton stimulated wonders on behalf of one of his favourite fellow-composers.

This was a one-night-only presentation in London, with another performance due in Birmingham forty-eight hours later. A London staging would now be intriguing: Gerald Barry’s operatic version of Earnest seems ideal for either The Royal Opera’s Linbury Studio Theatre or for English National Opera (which staged his Rainer Werner Fassbinder-inspired The Bitter Tears of Petra von Kant in 2005) when the company decants to one of its sister auditoriums for smaller-scale productions. Barry’s madcap and mercurial take on Wilde proved to be a great night out, and hopefully will be again.