Gerald Barry
The Importance of Being Earnest – Opera in three acts based on the text by Oscar Wilde [co-commissioned by Barbican Centre & Los Angeles Philharmonic: UK stage premiere] 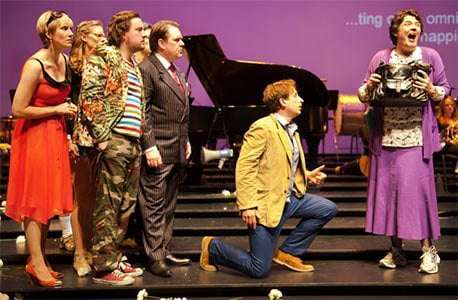 Oscar Wilde’s play The Importance of Being Earnest is a biting satire prettily disguised beneath tea-time linen and cucumber sandwiches. Not so in Gerald Barry’s brazen opera. Setting a libretto he pared down from Wilde’s text, Barry has produced a work in loud primary colours.

The opera charges through Wilde’s comedy of manners. The music is a composite of Stravinsky and Schoenberg (treated with irreverence – Barry studied with Karlheinz Stockhausen and Mauricio Kagel and here parodies serialism). Inventive mixed-media scoring includes plates smashed by the dozen, steel-capped boots in the percussion section, chanting from the players, and megaphones for Gwendolen and Cecily during their squabble over sugar lumps: painfully polite in Wilde’s play and delivered in prison-guard barks in Barry’s opera.

An off-stage piano begins a crashing approximation of “Auld Lang Syne” and for the next ninety minutes there is hardly a moment of rest. The orchestra, largely brass and low woodwinds, drives the story relentlessly on, churning up the lawn upon which the deceitful Ernests and their lovers stand. Often the singers’ lines (their words projected onto the backdrop) double an instrument so that the character is forced to keep pace with the galloping musicians. This is a neat method of reflecting the upper-class niceties that restrain Wilde’s lovers, although it leaves frustratingly small scope for expression. 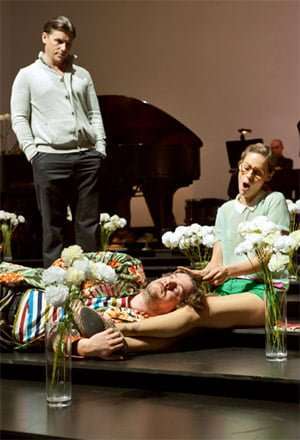 Keen to make this an absurdist drama and not a series of fey garden-scenes, Barry refuses to allow Wilde’s inventions to simper. Instead the performers stand and deliver music of incredible virtuosity, running through fast scales from the depths of their voices up to their falsettos or, in Cecily’s case, the stratospheric height of top Ds. There is a manic wild(e)ness omnipresent. Enthusiasts for the play and its gentle touch might find this approach brash. This is not an attempt to replicate Wilde’s style in music. In fact it is far more closely akin to Brecht and Pinter.

Previously heard in London through a concert performance conducted by Thomas Adès, Ramin Gray has now given Barry’s setting full dramatic treatment. Or rather, a small amount of movement. It is barely staged at all, performed without a set, the characters stomping up from their seats in the front row in cheap modern clothes and the occasional comic hat. During instrumental passages, they loll awkwardly around waiting for something to do. Algernon declares love to Cecily by posing as a poorly dressed rocker, crooning into a flower held as a microphone. The lovers straddled each other at every opportunity. Mostly they made a mess of the stage – kicking over flowerpots, crumbling cake onto the floor – and shouting at each other. The lighting is deliberately harsh, and when the house variety came up in-between Acts, the audience was even more unsettled.

The combination of sexed-up direction and strident, relentless music was hard to enjoy. At Opéra national de Lorraine recently, Sam Brown retained the charm and polite English formality of the play. In that context, Barry’s imaginative score could be a lot of fun. Instead, it all seemed a bit petulant. Comedy in the score derives from fractured musical lines breaking up the sense of a sentence, from ugly noises in the orchestra (akin to blowing raspberries) and from the sheer difficulty of the music: the cast struggled with the frenetic pace and leaping lines of the notation, although Paul Curievici was a sweet-voiced John Worthing and Alan Ewing won laughs as the pompous Lady Bracknell. On the whole, however, this is an underwhelming, unsophisticated production of what could become the first great comic opera of this century.