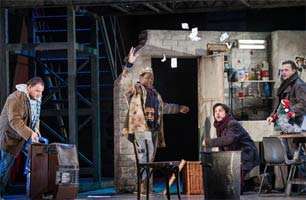 It was clear from the way Kirill Karabits characterised the burning of Rodolfo’s manuscript, its short-lived flames sputtering and dying in an instant, that the musical side of this revival of David McVicar’s modernised La bohème was in safe hands. The production itself, though, is a drab, threadbare effort: less “opera with the gloves off” (as one critic described another urban version recently) than opera with the lights off.

Given that his only previous foray into opera in the UK was ENO’s equally gloomy recent Don Giovanni, the Ukranian conductor clearly takes pity on the poor Brits with their miserable stages, so at Glyndebourne he and the London Philharmonic Orchestra fill the place with musical light. From the propulsive energy with which he colours the opening scene between Rodolfo (David Lomeli) and Marcello (Andrei Bondarenko, outstanding) to the tender anguish of the opera’s final moments, Karabits asserts his Puccinian credentials with passionate élan and impeccable judgement.

One wonders what David McVicar makes today of his twelve-year-old production. In the intervening years he has achieved great things as an opera director, many of them on a grand scale, so the pokiness of this low-rent La bohème can hardly be said to bear his signature. Despite the presence of a mobile gantry and a central revolve, in the outer acts we could almost be in a rehearsal room equipped with the bare essentials to tell the story – a limitation that places all the responsibility on the singers to bring Mimì’s world to life through the power of their performances. The cast for this revival is not wholly up to the task, although Irina Iordachescu is a fine-voiced and splendidly streetwise Musetta while the two ‘minor’ students are similarly vivid creations, both physically and musically, by Michael Sumuel (Schaunard) and Nahuel Di Pierro (Colline). 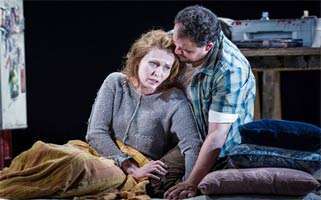 Ekaterina Scherbachenko, ideally wan as Mimì, produces some big, open-throated sounds from her fragile frame. Her lack of a convincing pianissimo is a shortcoming, however. For his part Lomeli has the opposite problem: his well-controlled tenor voice is excellent at depicting character but lacks both warmth and the ‘oomph’ to carry over the LPO at the big romantic swells. Only in the third and fourth acts, when the emotional going gets rough, do the pair of them gel as credible lovers.

Lee Blakeley is an excellent revival director with a strong track record, so surely he could have tamed the gurning, bum-scratching, comedy-voiced Benoît of Richard Mosley-Evans? It was a particularly annoying and unfunny moment, and the only time the tone of the performance faltered. For the rest, notwithstanding the flatness of the concept (and there’s little he could do about that), Blakeley and his movement team of Leah Hausman and Nicole Tongue rustle up some refreshingly busy crowd scenes in Act Two and achieve a suitable air of desolation in Act Three.

In 21st-century London, with Rodolfo tapping away on his laptop, it’s hard to worry unduly when a few sheets of paper get burned. He can always print off another copy later. And what’s the Latin Quarter doing in Soho? As for the dying Mimì, our NHS may be tottering but the ambulance service is still only a phone call away. The updated production’s list of incongruities is a long one; they are a constant distraction during a performance where nothing should matter to the audience but the fate of the characters.