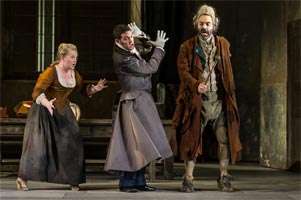 This is an exceptionally fine revival of Peter Hall’s 2005 Glyndebourne production, the staging cohesive and with an extremely well-balanced cast of principals. The evening got better and better. At the performance’s core is Elisabeth DeShong’s credibly youthful Angelina, impressively sung with velvety rich tone and a dazzlingly energetic coloratura full of wit and improvisation. The voice is wonderfully opulent in its lower register (shades of Marilyn Horne and the late Lucia Valentini-Terrani) but in no sense overblown and with breathtaking control of dynamics. Her dramatic interpretation was fine indeed: this Angelina has inner strength, kindness and a resourcefulness that radiated across the footlights.

The other undoubted find is Armando Noguera playing the crucially important role of Dandini. With a sappy flexible baritone he made light of vocal difficulties. His stage demeanour was full of bonhomie. His first appearance showed the valet being almost tentative impersonating his master the prince – and then visibly relaxing into it and milking it for every opportunity. He was very much the focus of the twists and turns of the plot and developed a wonderful interplay Don Magnifico. 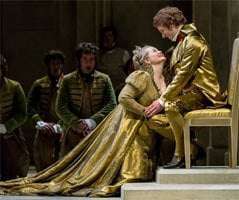 Strong vocalism and dramatic certainty was evident throughout the entire cast. Umberto Chiummo is a tall, lanky and disreputable Don Magnifico, with the potentially violent aspects of the character brought dramatically to the fore, to the extent that it was often hard to feel much sympathy for this bully. Chiummo made the most of his three big numbers. As an impetuous and also potentially violent Don Ramiro, Taylor Clayton revealed a light tenor with considerable agility to it. His highest notes perhaps lacked the ideal ‘ping’ but the voice is mellow and he has a wonderful sense of line. His runs, though accurate, were occasionally a little effortful and aspirated. He was a strong presence until the final scene, when he disappeared into the shadows.

The two dreadful sisters were skilfully sung by Elena Xanthoudakis and Victoria Yarovaya, nicely differentiating their characters and making the most of their opportunities. It is easy to overlook these roles as a standard fairy-tale pair, but strength of casting here always pays dividends. Xanthoudakis was a spiteful Clorinda, putting her foot in it at every test, whilst Yarovaya’s copy-cat Tisbe displayed an affecting pragmatism when the suiting game was over. Former Cardiff Singer of the World winner Shenyang also was a force to be reckoned with, making the rather knowing character of Alidoro more interesting than most interpreters. As ever the men of the Glyndebourne Chorus made an impact.

At the helm of this performance and the London Philharmonic Orchestra is James Gaffigan. The Overture initially lacked sparkle, despite the finesse of the woodwinds, but once Alidoro arrived in Don Magnifico’s house the temperature rose and the playing bristled and fizzed. Some tempos were a little forced and the beat was a tad inflexible, but overall there was a pervasive sense of the theatrical. What was particularly impressive was the control of light and shade at those moments when Rossini suspends time and has his characters express individual responses to a situation. ‘Questo è un nodo avviluppato’ with all its strong consonants went at a cracking pace and the composer’s play on the language was refreshingly underplayed for once.

It is at moments like this that this production really wins for the characters arrive naturally and able to address their thoughts to the audience direct – no silly business. Dramma giocoso indeed, and all the better for it!