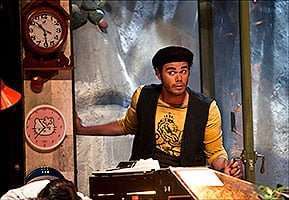 Glyndebourne Festival Opera closes its 2012 season with Maurice Ravel’s two operas. Written as separate entities, years apart, posterity has judged them a perfect and contrasting double-bill – and nowhere more so than in East Sussex in Laurent Pelly’s admirable productions (also in Paris for L’Heure and at the Saito Kinen Festival for both). Pelly addresses Ravel’s very different operas with imagination, wit and – when required – humanity. 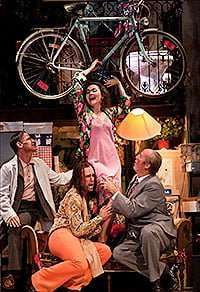 L’Heure espagnole (first staged in 1911) receives a lively performance in a colourful setting. The worthy if dull Torquemada is a clock-maker and a repairer. For one hour each week he leaves his shop to check the town’s timepieces. While he is away, his feisty and flirtatious wife, Concepción, has a bit of fun. This particular week gets rather absurd. Enter hunky and handsome Ramiro to have his watch looked at. Concepción is annoyed with hubby for not moving a grandfather clock into the bedroom – too heavy, my dear – and, anyway, he should now be out checking municipal chronometers. Muleteer Ramiro moves the grandfather clock with ease. Enter Gonzalve, Concepción’s lover (well, once a week, for one hour). To get rid of Ramiro, Concepción asks him to move the other grandfather clock. Now enter Don Íñigo Gómez, the banker who has appointed Torquemada as town clocker so he too can have his share of Concepción. As farce follows farce, the clocks being moved around to delirium, and often occupied by one of Concepción’s suitors, it is the muleteer who wins the day while the poet and the banker each buy a well-travelled clock to add to Torquemada’s coffers. 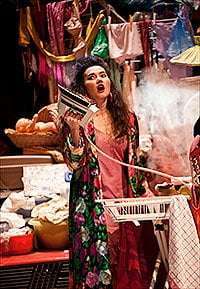 In the orchestra is much ticking as well as Ravel’s trademark (and appropriate) watchmaker’s precision of musical thought and orchestration, not least a recurring five-note motif and an ability to paint pictures in lieu of any staging (there are allusions to the contemporaneous Daphnis et Chloé, not least in the writing for harp). The ear is gratified by the London Philharmonic’s pristine and shimmering playing and Kazushi Ono’s well-paced conducting that avoids stasis.

If the ear is rewarded, so too the eye with a busy set that portrays not only the shop but the domesticity behind it – washing machine, sink, stairs to Concepción’s welcoming room and much bric-a-brac; although quite what a full-size cow is doing there must remain speculation. The excellent cast includes the honeyed tones of Elliot Madore as Ramiro – lost for words he may be, but he is very willing in other quarters… – and Stéphanie d’Oustrac who brings a wide vocal palette to her performance and who displays natty comic timing. L’Heure espagnole can have its longueurs and its weaknesses, but neither seemed apparent on this occasion – due to a combination of splendid musicianship, above and below the pit, and many delights to look at without distraction. 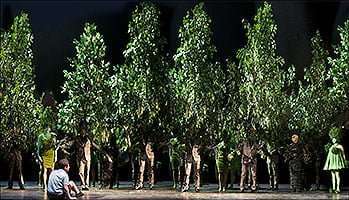 Musically, this vibrant and non-sagging account of L’Heure espagnole rather raises its profile, but was then overshadowed by a remarkable production of L’Enfant et les sortilèges (one of Ravel’s many masterpieces), first seen in 1925. Once again the LPO played with sensitivity (not least the pair of plaintive oboes that lead things off), beauty of sound, exactitude and dedication that left in no doubt Ravel’s wondrous invention and sheer brilliance of painstaking notation. If listening to a recording then the music feeds the imagination wholesomely; add Pelly’s astonishing staging and we are transported, delighted, just a little scared and, finally, moved. 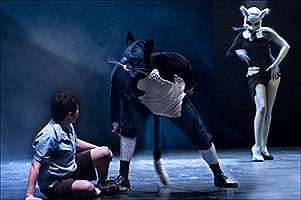 What huge sets have been designed; thus unnamed Child – a boy – is perfectly small in proportion and Khatouna Gadelia looks an ideal infant; totally believable. She is also athletic and vocally adept. Said Child is being a brat; nothing and nobody pleases him; he is out to make trouble and much hurt ensues. But furniture, animals, cutlery and trees have their revenge. Then the little boy performs an act of kindness on an injured squirrel; he is forgiven as well as enlightened as to the ways of the world, and returns to the bosom of his home – the opera’s close, here with mama silhouetted in the house, a friend indeed to the frightened in-the-garden child, is so simple but so poignant.

Pelly and his team have worked a miracle here – everything works and everything fits. The dusky, misty lighting is superb in creating something off-the-wall, and not just the wallpaper, allowing all the tormented characters to wreak revenge on the Child in a hallucination and nowhere more so than in the garden where animals and forestry are simply captivating. Surreal, yes, but the boy has created his own nightmare.

There isn’t a weak link in the cast – most of the singers from L’Heure espagnole returning to multi-task; and there is some great choreography and costumes, too. The music’s jazziness, pastiche, suggestion and compassion are treated as one by Ono and handsomely delivered by a meticulous LPO.

The ovation that the first-night audience afforded this very special staging was fully justified – it’s been a while since I have seen trees bowing in strict formation! This Ravel pairing is one of Glyndebourne’s finest two hours, L’Enfant et les sortilèges being exceptional in every dreamlike and frightening particular.