Britten
Billy Budd, Op.50 – Opera in a Prologue, two Acts and an Epilogue to a libretto by E. M. Forster and Eric Crozier, based on the short novel Billy Budd by Herman Melville [sung in English with English surtitles] 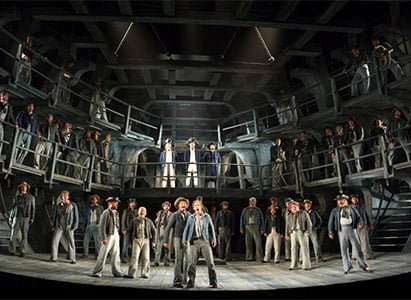 High as they were, expectations were exceeded when theatrical golden boy Michael Grandage first dipped a toe into operatic waters in 2010. His staging of Britten’s nautical masterpiece was an instant classic. It was probably inevitable, then, that Glyndebourne would choose the composer’s centenary year to revive this overwhelming Billy Budd.

The director hides the sea entirely from view and presents Melville’s story as a below-decks huis clos from which there is no way out for any of the protagonists. (A similar billow-free approach was subsequently adopted by David Alden for his deficient ENO production, the crucial difference being that with Grandage we never forget there’s an infinite sea just beyond the stage. For all that it remains unseen, the ocean is a constant presence.)

Designer Christopher Oram’s semi-realistic, heavy-duty sets have the ship’s innards encased as if in the excavated carcass of a giant whale, an environment that Grandage and his revival director, Ian Rutherford, people with a dizzying array of seamen, marines, officers, midshipmen, drummers and powder monkeys. Movement director Tom Roden comes into his own during the sea-chase early in Act Two; his urgent choreography of the crowd is one of the most thrilling sequences of ensemble staging I have ever witnessed. Even in the busiest scenes Grandage draws the eye where it needs to be, nowhere more so than on the berth-deck where all the pressed men live huddled together beneath a wood-strut ceiling that threatens to crush down on them as they sing their shanties. 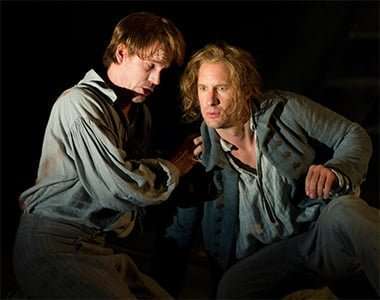 The casting is inspired, the singing flawless from principals and chorus alike. Among those returning from the production’s first incarnation (which is preserved on a superb Opus Arte DVD, which I reviewed) are Jeremy White’s sea-salt Dansker, Colin Judson’s snivelling Squeak and, most happily, Jacques Imbrailo’s charismatic and starry-eyed Billy. In Imbrailo’s loose-limbed performance Britten’s doomed hero is a force of nature: an impulsive, straightforward young man who sees the good in everyone and is therefore ill-equipped to handle disillusion.

New to their roles are Stephen Gadd as a bluff Mr Redburn and Peter Gijsbertsen, cowed and terrified as the Novice. They are joined by a supreme pair of singers as the hero’s angels of doom. Mark Padmore, his voice several notches bigger than usual and struggling to contain the wracked Captain Vere’s anguish, delves so deeply into his role that his tragedy matches Billy’s own. The formidable Brindley Sherratt, meanwhile, is granite-like and baleful as Claggart, the HMS Indomitable’s loathed (and loathsome) Master-at-Arms. Sherratt’s very stillness is fearsome, as is the dark hue with which he colours his resonant bass timbre.

Having long believed that from a purely technical standpoint Britten’s orchestration of Billy Budd is his crowning achievement, it was inspiring to hear the London Philharmonic Orchestra respond with such verve and virtuosity to Andrew Davis (a former Glyndebourne music director), and to admire the conductor’s attention to the music’s coloration. He located every emotional nuance within the opera’s psychology so that even passages of apparent repose, such as Billy’s heart-stopping lament in the Darbies before he is hanged, prickled with nascent horror.

Although Glyndebourne has scheduled only a handful of performances of Billy Budd (this was the second), no one who cares about opera should miss this exemplary and exciting revival. If a last-minute trip to the Sussex Downs is impractical, do grab the consolation prize of a semi-staged BBC Prom outing at the Royal Albert Hall on 27 August. It will blow you to Hilo.