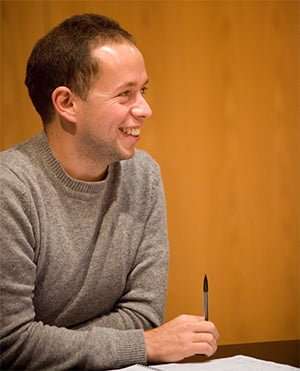 The plush, panelled surroundings of Glyndebourne’s Organ Room are ideal for salon music but they were hard-pushed to contain the dozen trained female voices who sang from the gallery in Luke Styles’s Vanity, for tenor, bass-baritone, ladies’ chorus and obbligato violin. Fortissimo passages heaved against the walls of the tiny space and eardrums (mine at any rate) struggled to cope with the vortex of sound.

Vanity, then, belongs in a larger space, and not just because it turns its volume up so high. Glyndebourne’s Young Composer in Residence has filled twenty concentrated minutes with some terrifically exciting melodic and harmonic ideas, all executed with the assurance of a mature musical mind; small wonder that Glyndebourne has placed such faith in this prodigious Australian who, for all his gifts, still wears youth’s proud livery.

None of the four Sonnets upon which Styles has fashioned his choral sequence addresses vanity as a deadly sin; in fact, a more powerful tie that binds them is the transient nature of beauty – and as such they might have appealed to Benjamin Britten, a composer whose influence on the score is unmistakable (though more than any choral works it’s the later Canticles that spring to mind). Yet Styles is very much his own composer and in Vanity he has written a work that deserves a wider audience and a life beyond the trio of pre-opera performances at this year’s Glyndebourne Festival.

Matthew Truscott attacked the first of the quartet, Sonnet 2 (When forty winters shall besiege thy brow), with a forceful violin introduction that moved between harsh downward jabs – perhaps to represent the poet’s “all-eating shame” – and a cold, drone-like support to the singers. In the quieter setting of Sonnet 18 (Shall I compare thee to a summer’s day?), Styles explores the instrument’s harmonic frequencies as a contrast to the male soloists, Stuart Jackson and James Platt – two fine young singers whose timbres melded in a fervent duet.

Sonnet 137 (Thou blind fool, Love, what dost thou to mine eyes) proved startling in its virtuosity and agitation. A showpiece for the chorus, it is an explosion of dynamic variation, energy and exciting harmonies. For the final setting, Sonnet 138 (When my love swears that she is made of truth), Styles embroiders the verse like an illuminated tapestry in sound as crunching harmonies diverge to an apparently impossible degree and then reconvene for a coda of hushed unity.

This first performance of Vanity was followed by a second on 24 May with a final opportunity to hear it at 3 p.m. on Monday 26 May, shortly before the bank-holiday performance of Verdi’s Falstaff.