Strauss
Ariadne auf Naxos, Op.60 – Opera in one act with Prologue to a libretto by Hugo von Hofmannsthal [1916 version; sung in German with English supertitles] 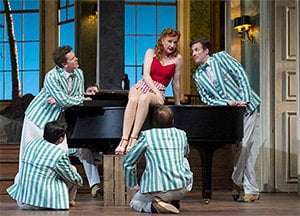 Thirty-five of the London Philharmonic Orchestra’s finest musicians did honour to Richard Strauss’s exquisite, lightly-textured score in a reading by Vladimir Jurowski (whose final year as Glyndebourne’s Music Director this is) that was sumptuous in its textures and lyrical in its beauty. All the more unfortunate, then, that matters on the stage in this new production of Ariadne auf Naxos prevented the music’s rapture from hitting home.

The overriding problem is one of tone. Some laboured funny business during the Overture involving the curtains on designer Julia Müer’s false proscenium arch raised two causes for apprehension, both of which were borne out: first that the German director, Katharina Thoma, might have a sense of humour that doesn’t quite cross the English Channel, and second that she might be more absorbed by her own ideas than by Strauss’s. Her inconsequential visual distractions made it hard to concentrate not just on the low string-writing that so elegantly opens the opera but on practically everything else as well. 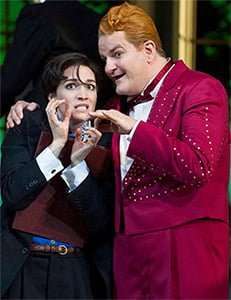 Updated to the Second World War and set in a country house not unlike the one in which we found ourselves, the Prologue was played relatively straight – some camp vulgarity aside (Wolfgang Ablinger-Sperrhacke’s effeminate Dancing Master was a stereotypical throwback, his performing act apparently channelling “Four Poofs and a Piano” but upstaged by a comedy-phallic-palm-tree gag that Thoma liked so much she used it twice). William Relton was a properly tetchy Major-Domo, Thomas Allen a mellifluous Music Master and Kate Lindsey – so good as Cherubino at last year’s Aix Festival – an exceptionally affecting and sweetly-sung Composer.

The 40-minute Prologue is a mini-Capriccio in its own right, with much navel-gazing by Strauss and his librettist Hugo von Hofmannsthal on the nature of art, and it ends by heralding a performance after the interval of a hybrid ‘opera’, half Greek myth, half Commedia dell’arte. Thoma goes with the flow until the Prologue’s coda but then subverts the writers’ intentions with a convincingly-staged Luftwaffe air-raid that rocks the house with a series of fiery explosions. No opera tonight then. Instead, after taking its break, the audience sees not a Greek island but a makeshift hospital, filled with casualties of war – among them Soile Isokoski’s Ariadne – and along with the smell of carbolic comes the unmistakable whiff of Regietheater. 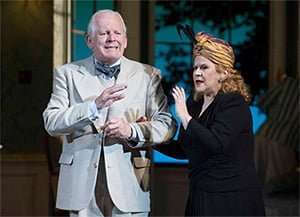 By laying a heavily-anchored concept upon such a delicately beautiful opera, Thoma takes a risk too far. She also falls into the trap of illustrating every rhythmic moment in Strauss’s orchestration with an unnecessary visual parallel, thereby injecting lead into the score’s veins and undermining Jurowski’s eloquent conducting. The comedy is explained away as ENSA entertainment, with Zerbinetta dressed as Betty Grable and the spirits dancing the jitterbug.

Zerbinetta is a character part that must glide easily between lightweight soubrettishness and the spectacular showpiece of her twelve-minute scena, ‘Großmächtige Prinzessin’. Laura Claycomb was more comfortable with the former: her voice lost bloom above the stave and she appeared to lack the confidence to attack the coloratura passages. Isokoski, by contrast, showed why she is one of the world’s leading Strauss sopranos with a fabulously adorned account of Ariadne. Her voice is powerful yet sure and evenly produced across her entire register and it was a privilege to hear what was – surprisingly – her role début. Alas, she was hamstrung by the fact that her Bacchus, the clearly ailing Russian tenor Sergey Skorokhodov, was way adrift from her prodigious standards in their extended duet, ‘Du schönes Wesen’.

Opera is a luxury toy-box for any creative team, yet whatever resources a director has at his or her disposal the imperative to enrich the audience’s experience never changes. More than once during this Ariadne auf Naxos I was reminded of a brattish child with a jigsaw puzzle, unable to make the pieces fit so hammering them into any old space. I have no idea what Katharina Thoma had in mind when she originally thought up her production, but there’s been an awful lot of hammering.