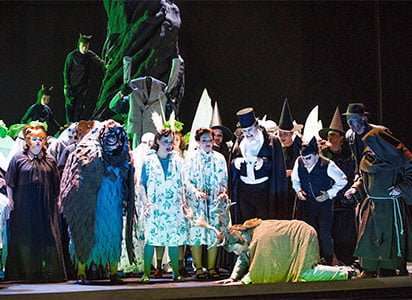 Given the wealth of nationalities gracing the cast for the first revival of Richard Jones’s oh-so-British staging, this Falstaff might have fallen flat on its big fat face. That it doesn’t is a tribute to everyone concerned, from Sarah Fahie’s immaculate revival of the director’s ideas to Mark Elder’s sprightly conducting of the Orchestra of the Age of Enlightenment and, above all, to an array of sublime performances that never fail to find the funny bone in Verdi’s score.

Jones’s post-war staging with its cartoon-like definition is huge fun. Whimsy is kept in check throughout and invites constant chuckles while avoiding overkill. With a ‘Where’s Wally’ cat in every scene and a climactic ambush in Windsor Great Park that’s dizzyingly populated with critters from the Universal horror movies of the 1940s, what’s not to love? In Ultz’s witty designs an improbable throng of cabbages and lettuces fills the Fords’ back garden (a nod to the ‘grow-your-own’ campaigns of the rationing era) while indoors some particularly vile green wallpaper awakens shuddering memories of an aesthetically ugly period in recent history.

One overly-strident cor anglais aside (probably a characteristic of the instrument rather than the player), the OAE’s original practices lent a gritty perspective to Verdi’s orchestration that helped its inherent rumbustiousness shine through. Elder, conducting the first two acts from memory, wielded his twenty-first-century baton with a swagger and a grin, and his players responded in kind. 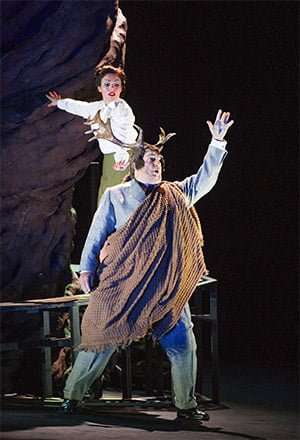 The tall, elegantly French Laurent Naouri wore Sir John’s fat suit like a second skin and threw himself into the comedy with something approaching subtlety. The moment when, stripped to the waist, he plucked at his chest to bemoan the onset of grey hair (“Ho del peligrigi”) was all the funnier for being understated. Charming and self-deprecating, he was the most benevolent of Fat Knights and he earned so much sympathy across the three Acts that his eventual self-revelation avoided the grinding emotional gear-change than can sometimes beset it. The Naouri we’re more accustomed to hearing is a brooding, intense singer – a peerless Golaud in Debussy’s Pelléas et Mélisande, for example – so to see him relishing a knockabout role, downing tumblers of wine and puffing on roll-ups, was an especial pleasure.

Susanne Resmark was a wry, soldierly Mistress Quickly whose deadpan delivery when greeting Falstaff – “Reverenza!” – was as funny as her rich mezzo voice was treasurable. Lucia Cirillo was a vivacious Meg and Elena Tsallagova an enchanting Nanetta, her voice of spun gold, matched both vocally and visually by the handsome Fenton of Antonio Poli. Roman Burdenko (Ford) and Graham Clark (a suitably grating Dr Caius) delivered similarly rounded characters, while a host of juvenile supernumeraries were as well-drilled as a pack of Brownies.

Standing out from this fine ensemble, though, was the Alice Ford of Ailyn Pérez, a simply glorious Verdian soprano whose star quality at Glyndebourne proved mesmerising even in the moments when she sang from the wings. Pérez’s soaring, bejewelled lines will live long in the memory and the prospect of following her career in years to come is something to savour.