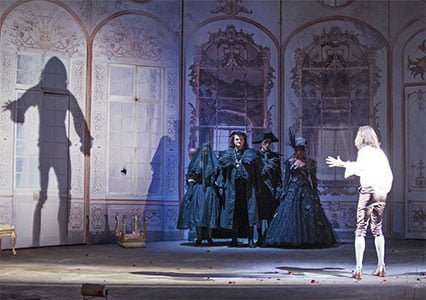 With La finta giardiniera (1775) the 18-year-old Mozart came of age, operatically speaking, insofar as the formal constraints of the libretto (with its set-pieces and recitatives) allowed him. Contemporary with such other teenage masterpieces as the Symphonies 28 to 30 and the Violin Concertos, Mozart’s score is already characterised by the remarkable vitality and responsiveness to every dramatic situation (notably in the extended ensembles) which came to fruition in the great operas with Lorenzo Da Ponte as librettist. An essentially Baroque sensibility remains at work in this drama, however, with the characters’ disguises and schemes in the service of amorous intrigue, though these do anticipate the ruses of the last Act of The Marriage of Figaro. The romantic entanglements are complicated, for at some point each person is in love with somebody who does not return affection. This is all set-off by Belfiore’s stabbing of the Marchesa out of jealousy, and her subsequent disguise as the ‘pretend gardener’ of the title.

In this production we see this background during the Overture. Belfiore is out of his mind, trying to escape the prison of the rococo drawing-room where he has perpetrated this deed. It is only towards the end of the drama that the gardener, Sandrina, reveals that the stabbing was not fatal, and that she is really the Marchesa.

Assumed appearances and their uncovering are at the heart of Frederic Wake-Walker’s new production – the first time Glyndebourne has staged La finta giardiniera. 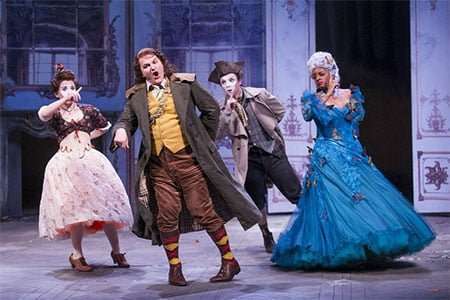 During the Overture Belfiore is in a dishevelled state of undress, but on his next appearance he is completely transformed in courtly attire to woo the Podestà’s niece, Arminda. The pompous Podestà’s lecherous colours are shown when he unbuttons his shirt and drops his trousers in front of Sandrina, while later on the servant Serpetta ostensibly demonstrates women’s allure for men by gradually shedding the many layers of her costume down to her underclothes, as though performing a period-style striptease. It is all weirdly prurient and fails to show any real insight upon the narrative.

There is another, more significant, unveiling towards the close of Act Three, as the somewhat dilapidated room of the Podestà’s palace comes down, which has served entirely to that point as the set. It seems that the characters, having torn shreds from each other during the preceding skirmishes and misunderstandings, now turn their sense of relief outwards with wilful (and rather childish) abandon by demolishing their immediate environment. In performance, this backfired, since it felt like a dramatic climax, and yet there were still twenty or so minutes to run, in which the Marchesa and Belfiore had yet to be reconciled (déshabillé of course, not in full fig).

Furthermore, as the opera is meant to be set, in part, in the surrounding gardens, as implied by the title, it made little sense to leave the audience’s first glimpse of the outdoors until so late. And even then an avenue of trees was revealed among a wood where it seems that the dark shadows and corners are supposed to leave us with a sense of unease, like at the end of Così fan tutte, where we are not at all certain that all matters have been resolved and all withheld secrets or inclinations completely dispersed. In which case, why then is this sylvan backdrop removed completely during the final chorus? It is altogether odd, given that the director has given thought to cutting and re-ordering some arias to make the potentially sprawling plot dramatically tighter and more coherent. 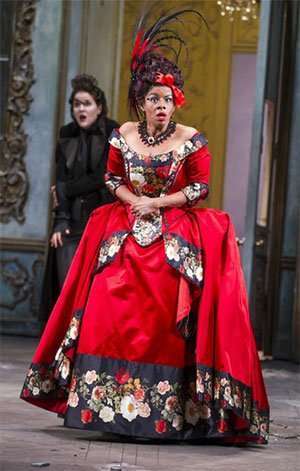 Given all that, the cast is particularly effective. Joel Prieto stood out for his lustrous singing, and physical appearance, which worked equally and marvellously well in his disingenuous attempts to woo Arminda as in his exchanges with the Marchesa where he realises his genuine love for her. Prieto has sung extensively on the Continent (including Belfiore in Berlin) but little in Britain, so perhaps we shall hear more from him. Christiane Karg’s Sandrina was certainly a figure inciting compassion, with beautifully tender singing, though perhaps lacking some of the charisma which might make us understand why a figure as impetuous as Belfiore would become besotted with her. Nevertheless Karg handled the shifting, unsettled emotions of her ‘mad scene’ in Act Two expertly.

Wolfgang Ablinger-Sperrhacke acted the part of the ludicrous Podestà with ideal absurdity, though even allowing for this depiction his singing was inclined to sound nasal and approximate in some arias. Nicole Heaston’s vocal agility was spot-on for Arminda’s haughtiness and vengefulness, whilst Rachel Frenkel showed considerable retributive force as Ramiro – the figure whom Arminda has temporarily spurned in favour of Belfiore – though Frenkel also sang a very heartfelt lament bewailing this situation. Joélle Harvey was a suitably pert Serpetta, the Despina-like servant with ideas above her station in seeking the affections of the Podestà, but who eventually settles for those of Nardo, the Marchesa’s servant. Gyula Orendt only managed the latter’s recitatives as he had come down with a throat infection, and so Gavan Ring sang Nardo’s arias and ensembles from the side of the stage. Vocally, the two singers were well matched, so the compromise hardly seemed incongruous. Ring caught all the comedy of the part, particularly in ‘Con un vezzo all’italiana’, in which he makes ironic vows of love to Serpetta in French and English, as well as Italian.

The Orchestra of the Age of Enlightenment’s performance under Robin Ticciati was pristine, if not quite inspired, or catching fire in the same way that Nikolaus Harnoncourt’s recording with Concentus Musicus Wien does (which also sets the bar high with Edita Gruberová’s realisation of the Marchesa, incidentally). Curiously there was a better sense of momentum within the more extended arias and ensembles, rather than from one number to the next. With two fairly lengthy halves and a mainly formulaic libretto, somewhat more urgency would have helped to overcome the longueurs, but Ticciati has plenty of time yet to develop as a credible conductor of Mozart. Meanwhile it would be churlish not to welcome this well-meaning attempt to add such an overlooked work to the composer’s canon on the Glyndebourne stage.