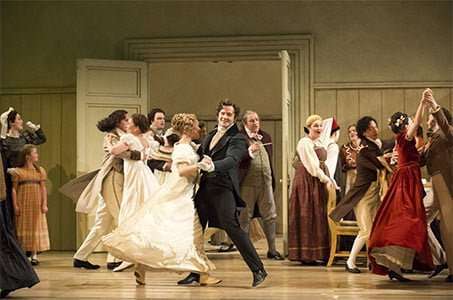 Lambs were baaing and champagne flowed as nature met nurture on a sun-soaked opening weekend at the Glyndebourne Festival; and the idyll seemed to extend even onto the stage as a simple, bucolic scene unfolded in the first of Tchaikovsky’s seven tableaux. For Graham Vick’s venerable production of Eugene Onegin has returned, twenty years on from its unveiling in the opening season in the new opera house, and the first-night audience loved it.

It’s easy to see why it’s such a crowd-pleaser. Vick’s interpretation ladles on the Byronic overtones – both Onegin and Lensky are presented as aesthetes – and Ron Howell’s attractive dances are consistently satisfying. Minor roles are confidently taken and well characterised, Matthew Richardson’s superb lighting wraps them all in a dream-like haze and the composer’s luxuriant scoring is a gift for the London Philharmonic Orchestra. 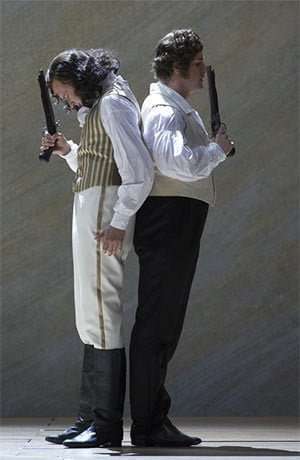 Only a churl would find fault amid such delights, but so be it. Starting at the top, literally, it is surely a mistake to base the surtitles on a translation of Pushkin’s novel rather than on an understanding of what an audience can absorb at a glance. Laboured rhyming couplets led to infelicitous syntax and an unwelcome mental diversion from the events unfolding several metres lower down.

In the pit, meanwhile, Israeli conductor Omer Meir Wellber charted a strangely uncohesive course through the opera, with the various LPO sections feeling curiously unaligned under his baton. In particular, Lensky’s great aria “Kuda, kuda, kuda” (Where have you gone?) dragged unduly as Wellber appeared to follow the singer instead of leading him. Indeed, musical opulence was at a premium throughout, although admittedly that was in keeping with Vick’s stark staging and Richard Hudson’s ascetic designs. Several layers of hyperactive curtains did an effective job of bringing the entertainingly-staged Polonaise to life, but elsewhere in that sixth tableau they redrew the production’s aesthetic and impeded the gravitas of Taras Schtonda’s exemplary Prince Gremin. 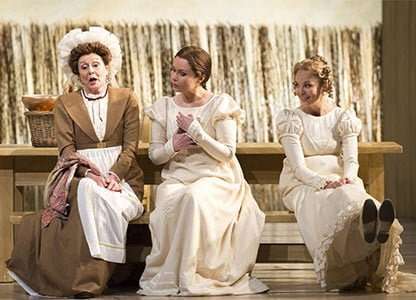 Ekaterina Scherbachenko managed Tatyana’s physical transition from ingénue to grande dame as well as any soprano I’ve seen, but her voice in its current state is a size too small for this deceptively dramatic role and she lacked the power to deliver its extremes. Both male leads, though, were a shrewdly cast: the wonderfully rich-toned young Ukrainian Andrei Bondarenko overcame an unfortunate wig to create a complex, troubled Onegin (his soliloquy of regret, “Uzhel ta samaya Tatyana” (Can this really be Tatyana) was intense and affecting), while Edgaras Montvidas was vocally unusual as Lensky: plaintive and unheroic of voice but oddly attractive despite or maybe because of it: in short, ideal as Pushkin’s tortured poet.

While an evening of delightful episodes didn’t quite add up to a satisfying whole, there was still lots to appreciate. Diana Montague and Irina Tchistjakova expertly conjured the homely domesticity of Tatyana’s childhood out of some sparse textual and scenic material; François Piolino kept Monsieur Triquet the right side of creepy, and the Olga of Ekaterina Sergeeva was a wide-eyed innocent with a richly-veloured mezzo. To cap it all, as a welcome bonus after the long interval a superbly executed pas de deux from Joseph Caley and Jenna Roberts met with roars of approval from the post-prandially happy audience.