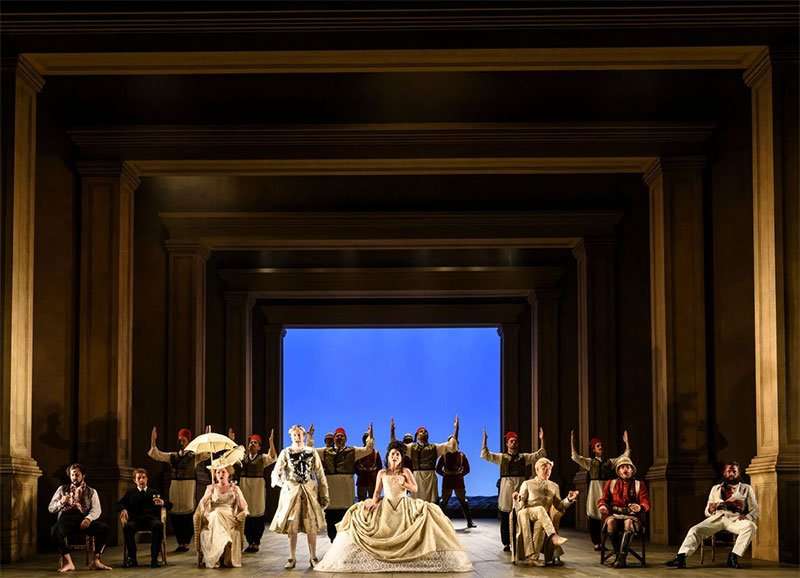 It is testament to the ever-widening reception of Handel’s stage-works that even a major opera festival such as Glyndebourne can programme two revivals of the composer’s dramas in one season. David McVicar’s production of Giulio Cesare was seen previously in 2005, 2006 and 2009, in between which have also come Rinaldo and Saul, the latter also being revived this year. Compared with Barrie Kosky’s of the latter, this Giulio Cesare offers a rather more straightforward re-telling of the given work, but it still represents an effective, even Baroque synthesis of theatrical elements that are referable intelligibly to the original, rather than a post-modern mishmash, and continues a growing tradition of Handel performance by Glyndebourne traceable back to the festival’s Theodora of 1996 (though interestingly, not earlier than that; surely a Serse or an Alcina are due?).

To start, the basic set – with its perspective on a series of plain pilaster columns receding to the rolling waves of the sea – recalls such theatres of Handel’s time as the King’s Theatre, Haymarket, where Giulio Cesare was premiered in 1724. The episode in Roman history it recounts is brought still closer in time and global politics, as Julius Caesar’s campaign in Egypt is re-interpreted as a British imperial venture to that country, with soldiers in caps and red jackets, Caesar as their leader, and Tolomeo a slippery Khedive. 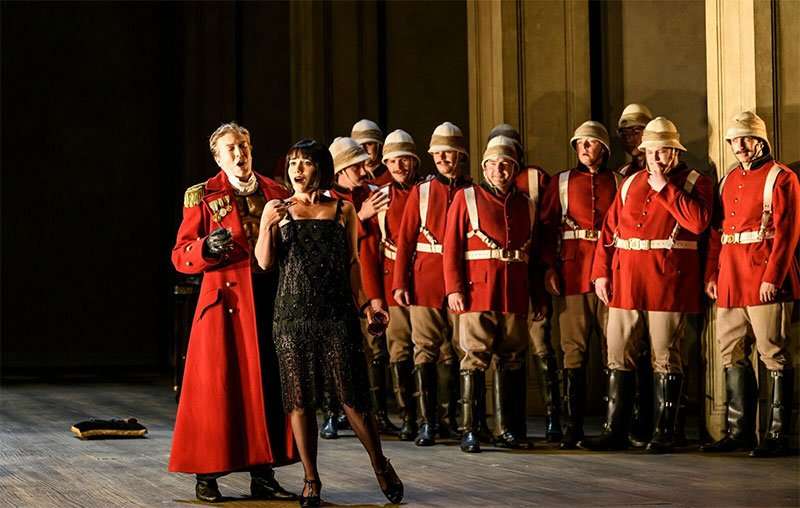 That ordered backdrop for the British incursion into Egypt plays well to the chauvinist notion we used to entertain of bringing the civilisation and order of the Pax Britannica to apparently benighted countries in need of it, such as this Egypt in thrall to the pampered luxury and Epicureanism of its elite, as demonstrated here by the richly coloured draped curtains for Cleopatra’s abode, and the ultimately effete, cowardly figure of Tolomeo. No ironic view on either side is really sustained in McVicar’s production, despite the exoticised, othered view of the Orient having been exploded by Edward Said, for example, in the 1970s.

But it becomes clear by the time of the supposed lieto fine (happy ending) of this opera seria that this particular royal marriage between Caesar and Cleopatra, and by implication between two different nations or polities, is one of political convenience. A further comment upon Caesar’s (and by extension British) imperial aims is implied by the innocuous flotilla of galleons with white sails on the sea at the start of the opera giving way to modern warship and airships at the moment of his triumph over his enemies; after which an ocean liner (to Thomas Mann, thinking in particular of the Lusitania, a “gigantic pleasure ship” and an “impudent symbol of English mastery of the sea and of a still comfortable civilisation”) heralds Caesar’s appearance. Like the ghost of Banquo haunting Macbeth’s elevation to power, Tolomeo and Achilla also appear from the dead to provide their own silent condemnation upon the union. Life, seemingly imitating art, happened to cast an additional angle on this theme during the weekend of this opening performance, as another boat of African migrants and refugees, sent forth from the political chaos that is Libya, following another recent, bungled military intervention in which Britain played its sorry part, lay adrift on the Mediterranean whilst various countries disclaim any humanitarian concern or responsibility. 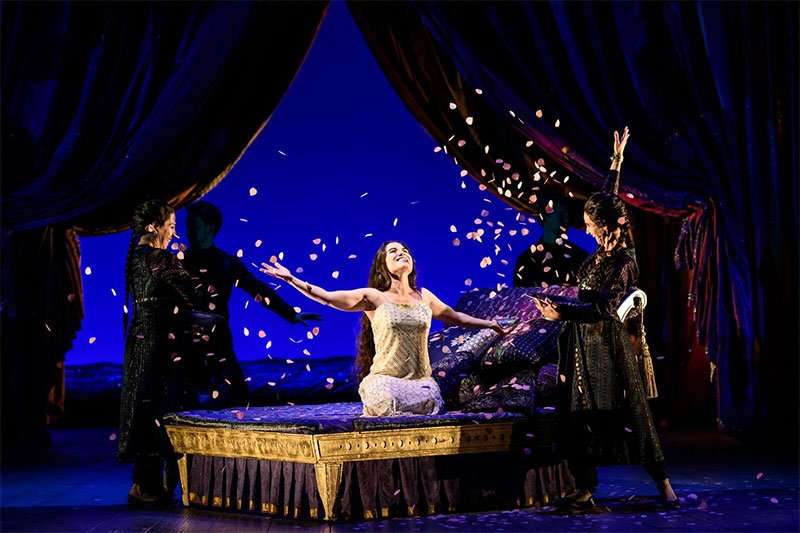 Sarah Connolly seemed to be under the weather as her performance on this opening night was oddly under-powered and reticent, betokening quiet self-assurance perhaps, but not projecting any expression of commanding authority into the auditorium, even though the agility of her coloratura was unhindered. In consequence, Cesare comes across as a bafflingly subsidiary musical presence, at least, rather than the central role, but perhaps that will be resolved during the run.

Joélle Harvey is a fresh and clean-voiced Cleopatra, whose performance is shot through with vivacity and spirit if not the same sexual allure and variety as Danielle de Niese in the original run (and as captured on DVD). Harvey’s ‘Piangero’ is ravishing for its tonal precision, but she and Connolly are rather coolly chaste in their final duet. It is a memorable aspect of this production that several of Cleopatra’s arias are accompanied by dance, offering another dimension that is, at times, dazzling. Andrew George’s choreography clearly draws its inspiration from the pulse of Handel’s music, but some may find it distracting to the overall thrust of the drama; further Baroque profusion it may be, but this opera is not by Rameau.

Greater colour and presence are to be found in the other roles, diverting the drama more towards that which goes on around the central love interest between Cesare and Cleopatra. The low, sonorous tones of Patricia Bardon amply characterise the widow Cornelia’s grieving after the beheading of Pompey, and the fullness of Anna Stéphany’s singing creates a powerful impression in the part of their son, Sesto (despite the protestation of one uninformed audience member who was unable to decide whether this – “Sextus” in the English translation, adopting the Latin second declension original – is a male or female role), which belies the boy’s youth, but potently underlines the righteous vengeance he seeks for Pompey’s murder. 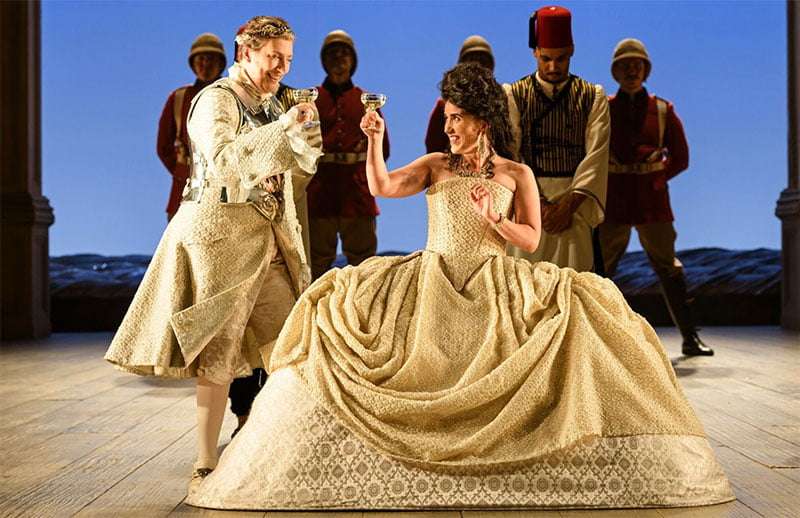 Christophe Dumaux’s rich, supple portrayal as Tolomeo successfully conveys that character’s duplicitous nature, whilst also remaining musically persuasive with his sharply defined countertenor. John Moore’s Achilla is strongly assertive as required by the dramatic contexts of his two arias, first in harassing Cornelia, and subsequently railing against Tolomeo’s treachery, whilst Kangmin Justin Kim creates a delightfully ambiguous, androgynous Nireno, in both his acting and musical delineation of Cleopatra’s eunuch.

In the pit, William Christie directs the Orchestra of the Age of Enlightenment in a lithe and well-driven interpretation of Handel’s eclectic score, but more depth and colour could be drawn from its contrasting sequence of numbers; the strings, for example, often sound somewhat foursquare, even thin. Cesare’s celebrated ‘Va tacito’ starts heavy-handedly and, although the da capo is delivered more quietly, that lessens the tension, leaving the choreography alone to suggest the stealthy manoeuvrings between Tolomeo and Cesare, as they ironically dance in cautious, threatening steps towards each other. Faster numbers sparkle with exemplary energy, but one misses something of the greater interpretive panache which Christie, as the founder of Les Arts Florissants, might have brought here. Nevertheless, music and drama co-exist in harmony resulting in a generally satisfying production of an understandably ubiquitous Handel opera.