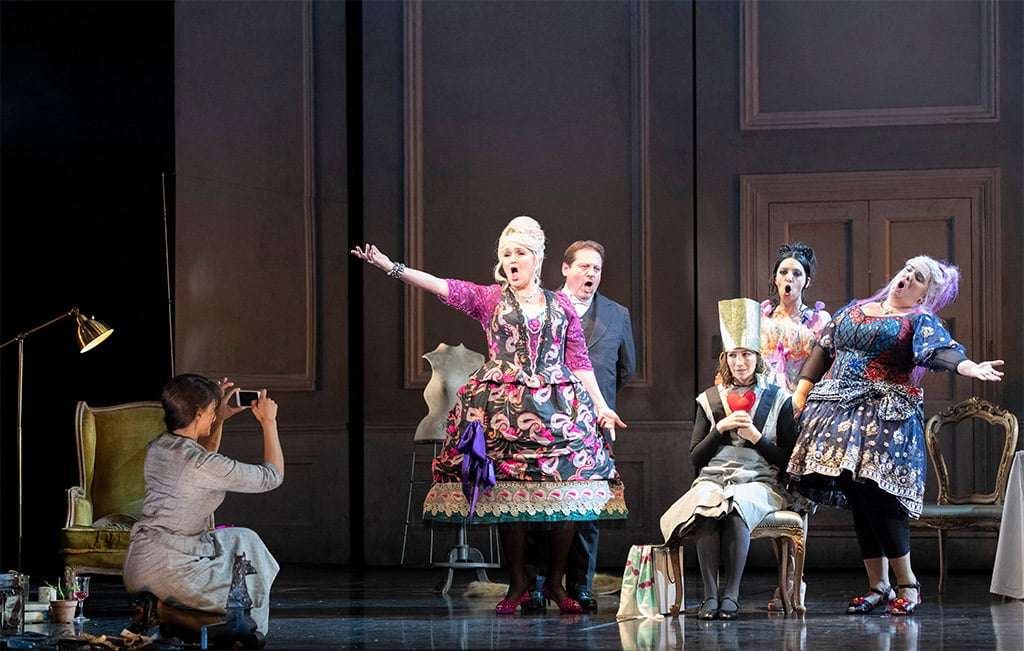 The essential premise in this production is that Cinderella is not a simple fairy-tale but a cauldron of adult neurosis, emanating from a child’s loss of her mother and a gnawing sense that she’s a burden to her father. As such, and despite the pleasing presence of numerous youngsters in the audience for opening night, this is not a children’s work, but rather an extended dream-sequence bound up with our collective consciousness, memories, suppressed thoughts, fantasies, sexuality and gender identity (which for once is fully in the score not least with Massenet writing Prince Charming as a breeches role).

Librettist Henri Cain keeps all the significant features of Perrault’s version (the weak father, the insufferable step-sisters, the slipper) but he injects dream, too, straying into the world of Shakespeare and Mendelssohn, by adding an enchanted oak tree, and magical spirits. John Bausor’s imaginative set and Anna Watson’s lighting surprise and delight throughout, their prisms capturing and diffusing light, framing the action perfectly.

This Glyndebourne staging toured last year and is re-directed for the 2019 Festival by Fiona Dunn. It is universally well-sung. Danielle de Niese is a sweet Cendrillon, with genuine presence and a vocally-secure voice which is perfectly pitched. But in the opening scene she struggled to make her predicament ‘real’ in the sense that her step-sisters and step-mother are no more than over-the-top, garishly dressed, pantomime villains. When they leave the stage, de Niese sings delicately, but the aria as a whole does not seem rooted in her situation, as the text suggests that the sisters are now more beautiful in their happiness. But this is so obviously not the case, as they are presented as uncouth and vulgar creatures, and the step-mother elicits many a laugh for her raunchiness. By contrast Lionel Lhote, Cendrillon’s father, is impressively believable as a fully developed character and never less than affecting. 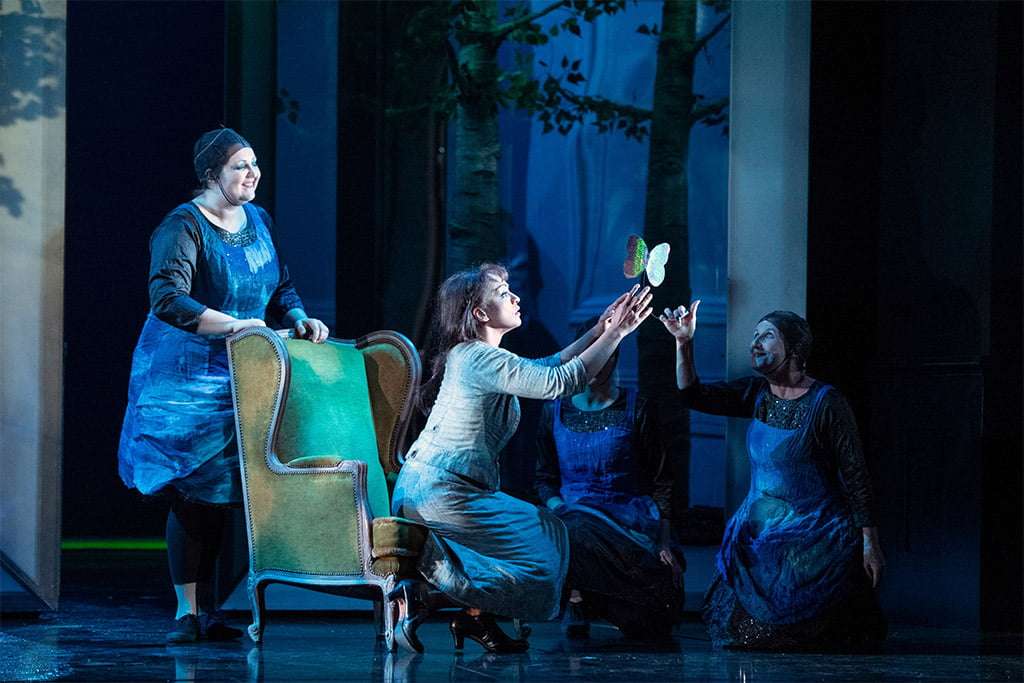 De Niese is in her element following the interval, both in her monologue upon her return from the ball and in the love-duet under the oak tree with Kate Lindsey as Prince Charming, and Massenet’s music breaks our hearts. Drawing on the darker register of her voice, Lindsey gives full rein to her emotions, including terror at the thought of losing what she has just found. At times she grips herself with a rather thrilling all-or-nothing intensity; she certainly conveys the intoxicating nature of love. Nina Minasyan won hearts in her Glyndebourne debut as the Fairy – she excelled in sparkling coloratura. Particularly notable is how she places top notes, with ringing purity of tone; mesmerising.

In a rather jarring final moment, especially for anyone following only the surtitles, the company breaks the fourth wall to tell us with generic jollity that “thus ends our fairy tale”. It is certainly odd, though would be less strange if the French were better rendered into English. This is top-notch Massenet, endlessly rich in melodic invention and rhythmic ingenuity, with John Wilson eliciting the most sensitive playing from the LPO. Wilson’s control of dynamics is superlative, though at times I yearned for a touch more abandon. This is passionate music after all. Despite some distracting fussiness in the production this is a Glyndebourne triumph which makes for an unusual, enchanting and thought-provoking evening.