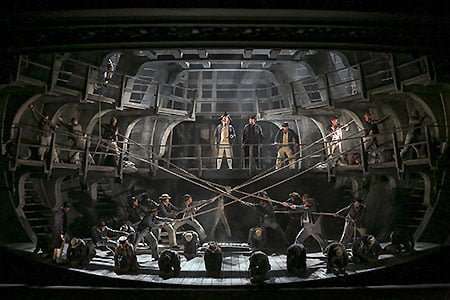 New York’s celebration of Benjamin Britten’s centenary (2013) continues with Michael Grandage’s remarkable production of Billy Budd for Glyndebourne Festival Opera. This, the second of four performances at BAM, was not only a marvelous musical experience, but also a gripping evening of theater – thanks to Britten engaging Eric Crozier to collaborate with E. M. Forster on the libretto, and to the talents of Grandage (in his debut as an opera director) and Ian Rutherford (who directed this revival).Sir Mark Elder led the London Philharmonic in a superb account of Britten’s score – a masterpiece that brilliantly illustrates the opera’s action, intensifying moments of high drama and offering calmer episodes. Britten’s setting of the crew’s “O heave, o heave away” serves to establish the bleakness of life on board ship as much as does the officers’ cruelty. The shanties are not much brighter, references to the sailors’ prior lives rife with regret and resignation, but they build to tremendous power that is matched by the orchestra. The ghostly strings in the Prologue presage the moral dilemma that Captain Vere will face at the crux of the action, and the orchestra unmistakably signals that moment of truth when Vere declines the opportunity offered by the drumhead court trying Billy to speak on the lad’s behalf. Britten’s inventive orchestration serves to shape the personality of the main characters and to reflect the constant, if invisible, presence of the sea. 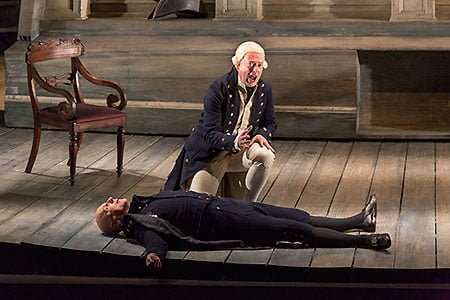 The three central characters were compellingly portrayed. Brindley Sherratt’s powerful and complex characterization of Claggart left much room for speculation about what motivates him to turn so violently against Billy, whom everyone else liked – nay, loved. Could the Master-at-Arms really have been so foolish as to interpret Billy’s song of farewell to the ‘Rights of Man’ – the vessel from which he had been impressed – as an expression of allegiance to the French Republic and hence treasonous or potentially mutinous? Or was he just using those words to manipulate the other officers who (as Redburn’s and Flint’s visit to Vere’s cabin makes clear) are much less clever than he? Even Claggart himself seems not to understand why he is compelled to destroy Billy, which makes the ambiguous homoerotic suggestions in his chilling aria ‘Oh beauty, oh handsomeness, goodness!’ all the more enigmatic. Sherratt’s penetrating bass voice never flagged in the long-sustained notes that end many of his phrases. His character’s sadism was matched only by the smugness and self-assurance with which he falsely accused Budd of insubordination, treason and mutiny.

Jacques Imbrailo brought a pleasing baritone voice and winning personality to the ever-optimistic Billy. This character is rather one-dimensional, but Imbrailo never let that make him dull or boring. The enthusiasm for sailing and for life that wins over Billy’s messmates, his Captain, and perhaps even the Master-at-Arms, also engaged the audience, investing us in friendship with him. His rendition of ‘Billy in the Darbies’ [handcuffs] awaiting execution was achingly touching, as was Billy’s bravery in his final moments when in the presence of the entire crew he blessed the man who might have, but did not, spare his life.

Best of all was Mark Padmore’s Vere, sung with remarkable clarity, firmly projecting the Captain’s tortured conscience both during the events aboard the ‘Indomitable’ and as a regretful old man. From the moment when Budd strikes Claggart, Vere’s detestation of the master-at-arms and his affection for Billy are swept away by his perceived duty, and he reluctantly remains silent when by speaking he might have saved Billy’s life. Declaring “Beauty, handsomeness, goodness, it is for me to destroy you”, Vere despairingly realizes that he has become the instrument of Billy’s death, echoing nearly verbatim the words of the now-dead Claggart. Padmore’s portrayal of Vere’s changing emotions and attitudes in that crucial scene was convincing and most affecting. Then, in an effective staging touch, it is the aged Vere who attends Budd’s hanging, as if he were not participating in the event, but rather recalling it – which he does explicitly as he steps forward to deliver the Epilogue, repeating Billy’s “I’ve sighted a sail in the storm” and then ending just as he began the Prologue nearly three hours earlier.

The remainder of the all-male cast was uniformly strong and the Glyndebourne Chorus was exemplary. Particular standouts included a trio of officers – David Soar as Mr. Flint, Darren Jeffery as Lieutenant Ratcliffe and Stephen Gadd as Mr. Redburn – and several of Billy’s fellow-seamen: Jeremy White as Dansker, Peter Gijsbertsen as the Novice, and Daniel Norman as Red Whiskers.

Christopher Oram’s set presents the ship in cross-section, with all of the action occurring within its claustrophobic confines, leaving any suggestion of the surrounding sea to Britten’s music. The drudgery of the sailors’ everyday work is contrasted starkly with the excitement of the battle scene that begins Act Two, the latter action choreographed brilliantly as crewmen crisscross the stage hoisting sails and readying cannon. Later, when the time arrives to carry out Budd’s hanging, four sympathetic members of the crew come forward to give the rope its fatal pull, their bodies juxtaposed at odd angles in an unforgettable tableau.

The ovation went on and on – and would have lasted much longer had the curtain not been rung down and the house lights brought up.