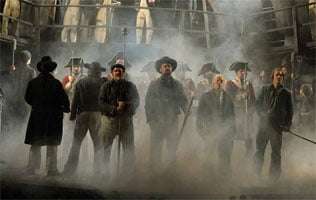 Glyndebourne’s new staging of “Billy Budd” is the first opera Michael Grandage has directed. He is well known for his Donmar productions, and his fluency and eye for detail inform what is, for many, Britten’s most successful fully-resourced stage-work.

Christopher Oram’s set works brilliantly – it’s cleverly designed to be instantly recognisable as an 18th-century warship, with rigging, timber galleries and cannon, but is primarily to make the naval hierarchy between crew and officers crystal-clear. Recent productions have at least suggested the possibility of sky and sea. Here Grandage and Oram concentrate exclusively on the confined, claustrophobic reality of naval life, which will make perfect sense to Patrick O’Brian fans; and once the huge wooden belly has loomed sinisterly – and to great effect – out of the shadows during Captain Vere’s ‘Prologue’, it remains fixed throughout the rest of the opera. The only variations are a partition that drops to create Vere’s quarters and a timber ceiling that closes to form an inescapable cage. It’s both semi-realistic and, like the opera, intensely theatrical. 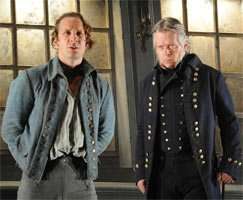 Jacques Imbrailo is outstanding as trusting, innocent Billy, appealing rather than alluring, which suits this straightforward, non-concept production, and was both physically and vocally agile – his light, lyrical baritone the perfect vehicle for Billy’s forthright goodness. His nemesis, Claggart, is magnificently sung by Phillip Ens, his pitch-black voice and ineluctable destruction of Billy radiating a furious contempt for all humanity – a terrifying portrayal of the blind pointlessness of evil. Among the numerous smaller roles, Matthew Rose’s Flint, Iain Paterson’s brusque and touching Redburn and Darren Jeffrey’s Ratcliffe make significant contributions, as does Alasdair Elliott’s Red Whiskers and Jeremy White’s Dansker. 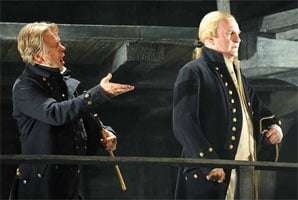 John Mark Ainsley’s Vere, even in this exceptional cast, proves unforgettable. He sung Vere in Richard Jones’s staging for Frankfurt Opera two years ago, and this British role-debut places him as one of the great Veres. He sang with great beauty of line, with that trademark warmth and barely contained passion that makes him a Britten natural. The way he inhabited the character of the conflicted aesthete and man of war was complete – the body-language of a man bound to duty and morality, who cannot bear to look at Claggart, whose posture is living proof of the pressure and tension he lives with, even whose style of walking draws a fine line between purpose and diffidence. The erotic aspect of Vere’s attraction to Billy was there, as it were, for the taking, but the only point of physical contact between them was a hand lightly placed on a shoulder. Things bode well for Ainsley’s forthcoming portrayal of Loge in Bayreuth’s new ‘Ring’ cycle, and there is the possibility of him playing Peter Grimes.

Ainsley’s is an astonishingly perceptive performance, one that set the tone for the whole opera. The first half was possibly a bit hesitant, but then the opera itself takes its time to introduce the three main characters and the way the evil is set up can seem a bit too schematic. The second act, though, really took off. The all-hands-on-deck to chase the French ship was electrifying and in terms of detail very well observed. This is grand opera at its grandest and impeccably managed, and the pace didn’t falter through Claggart’s death and Billy’s trial and execution, the latter a truly harrowing piece of stagecraft.

Mark Elder’s conducting keeps things on a tight leash, with a terrific sense of propulsion, and the famous sequence of chords when Vere tells Billy his fate combined anguish, tenderness and consolation to an extraordinary and transcendent degree. Britten and Glyndebourne have always done well by each other; this time, in its first staging of “Billy Budd”, Glyndebourne has surpassed itself.