Handel
Rinaldo, HWV7 – Opera in three Acts to a libretto by Giacomo Rossi and scenario by Aaron Hill, after Gerusalemme liberata by Torquato Tasso [sung in Italian, with English surtitles] 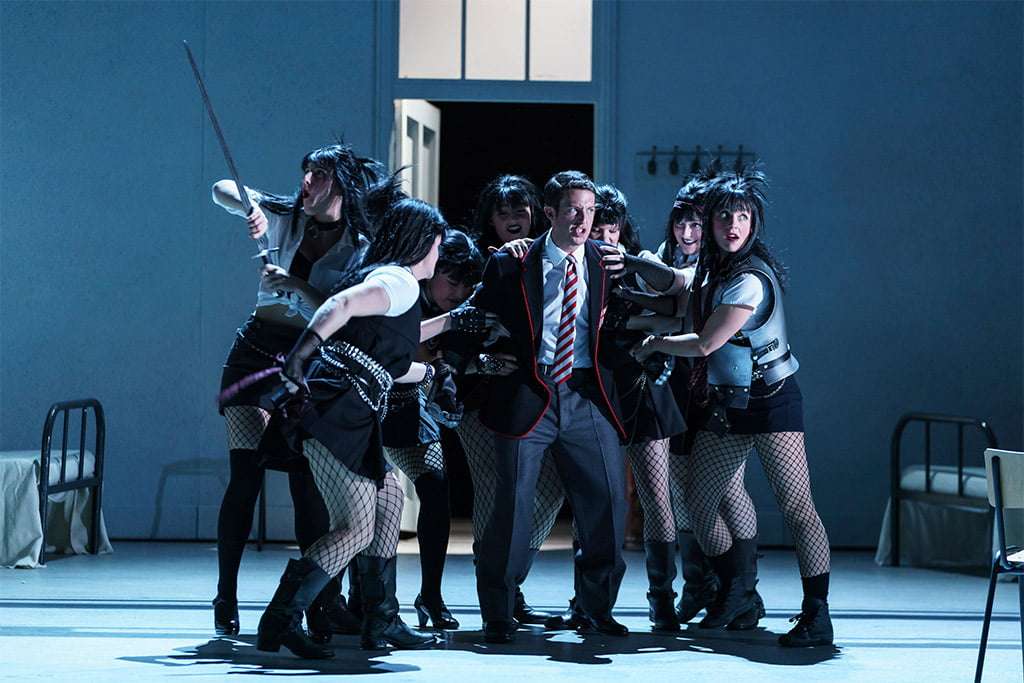 The historical setting of Handel’s Rinaldo – 12th century Jerusalem during the time of the Crusades – has been imaginatively realigned in Robert Carsen’s production, now rebooted by Bruno Ravella and enjoying its fourth revival since it opened at Glyndebourne in 2011, three centuries after the opera was first shown in London.

Carsen gives the plot a radical makeover and transposes the Holy Land to a 20th century boarding school. But the age-old antipathy between Christianity and Islam remains (albeit comically transformed) in this absurd tale of abduction, attempted seduction and rescue seen through the vivid fantasies of a bullied pupil. A history lesson poses the question: “were the first crusaders inspired by religious beliefs or political ideals?”. With this assignment and a picture of his beloved Almirena by his desk, Rinaldo dreams of leading his fellow pupils in heroic deeds, winning battles for his headmaster, Goffredo, Captain of the Christian armies, and defeating two cruel senior tutors, visualised as Argante, the Saracen King of Jerusalem, and a PVC-clad dominatrix Armida, sorceress and Queen of Damascus. 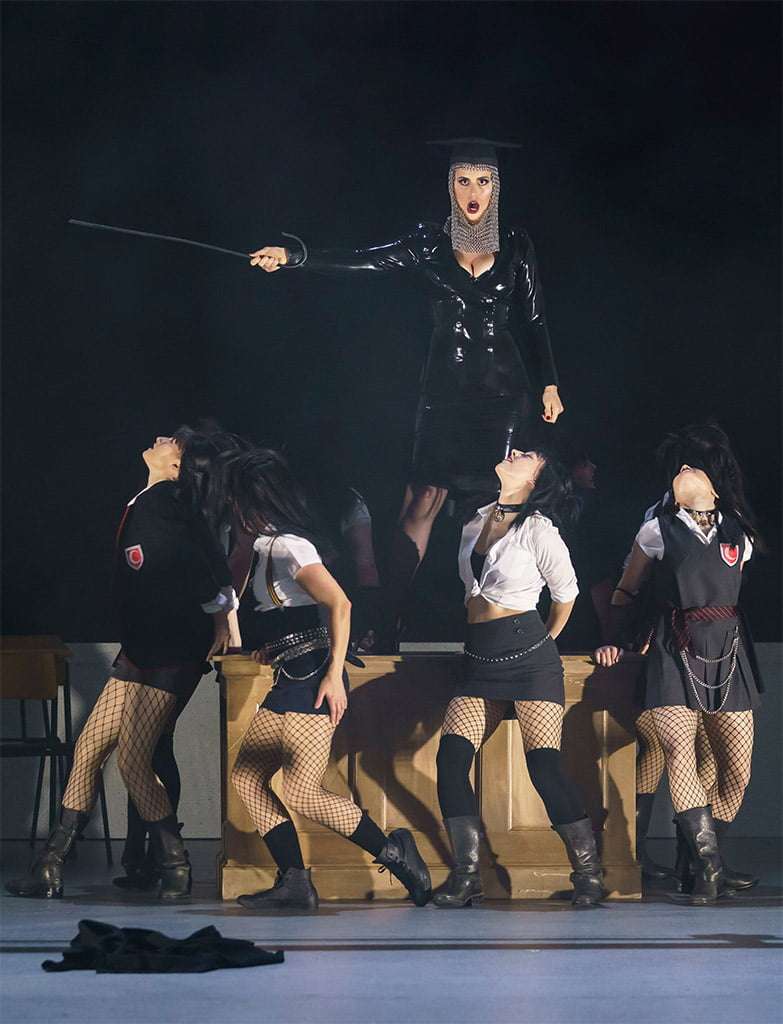 Maybe this production has yet to achieve pilgrimage status, notoriety yes. But, there is plenty of mileage in its whacky invention, and the cast enter whole heartedly into its delightful mash-up of Hogwarts and St Trinian’s. Rebellious girls soon abandon their niqabs and black robes for short skirts and fishnets to brandish lacrosse sticks and scimitars. It’s hugely entertaining, with some standout moments including the ensnarement of Rinaldo by a coven of look-alike Almirenas, eye-dazzling explosions in the school chemistry laboratory before Rinaldo’s cohorts don wigs and schoolgirl uniforms, and a triumphant battle cleverly staged as a slow-motion football match. The witty design is in fact the star of the show and upstages some of the singing, all of which is highly accomplished and at times moving, but not in a catch-your-breath sort of way.

Having four countertenors is luxury casting, and their prowess is marked by technical ease, robust tone and terrific musicianship. While they never sing together there is little to distinguish one from another vocally. Jake Arditti projects well as the valiant hero and does a fine job as a timid Rinaldo to the more forward Almirena. His is an easy voice to listen to and, if not ravishingly beautiful, there is a pleasing quality to his Act One ‘Cara sposa’. James Hall and Tom Scott-Cowell as Goffredo and Eustazio, respectively, deliver spirited characterisations, secure and imposing in tone, and William Towers revels in his role as the nutty professor / Christian magician. 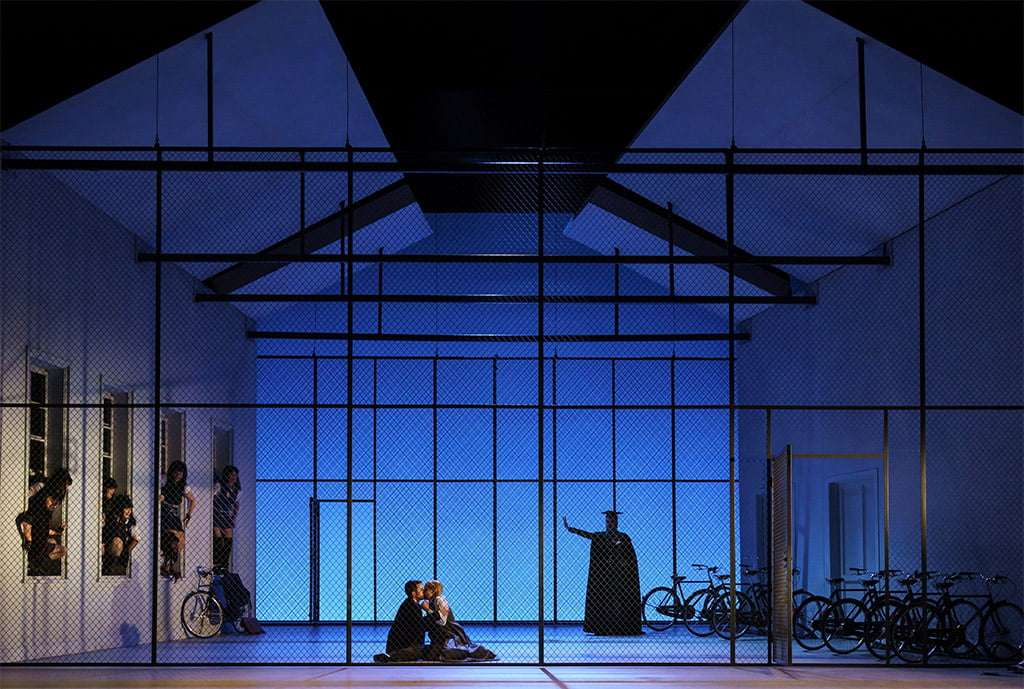 Irish soprano Anna Devin, as the kidnapped Almirena, convinces more for her charm and vocal purity in the bird duet ‘Augelletti che cantate’ (with lovely support from the pit) than in her tenderly sung ‘Lascia ch’io pianga’. Aubrey Allicock’s self-interested Argante never quite gets under the skin but dispatches his coloratura passages with aplomb. It is left to the American soprano Jacquelyn Stucker to create the most memorable portrayal, as the punitive Armida, domineering yet vulnerable, singing with rapier-like bravura in ‘Furie terribli’ and poignancy in her show-stealing ‘Ah! Crudel, il pianto mio’ – a performance that elevates this production onto a higher musical plane.

David Bates draws stylish playing from Glyndebourne’s Touring Orchestra, underlining the score’s colourful detail and sustaining its dramas in well-judged tempos. Altogether, these are handsome performances; the evening captivates for its theatricality.