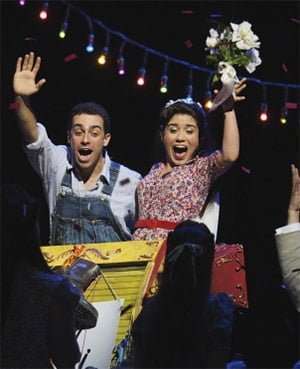 Cynic that I am, it seems to me that Donizetti’s L’elisir d’amore is hardly an opera with a demanding plot or score, and that consequently there is not very much that can severely hamper a production. This revival for the Glyndebourne Tour of Annabel Arden’s production achieves a great deal of colour and movement, but just fails to sustain the last degree of sparkle and fizz.

The setting is straightforward enough – the cobbled square of an Italian village, overlooked by the rugged stone façade of an old palazzo or civic building and ringed with small olive trees. Ostensibly the time is the 19th-century, but Nemorino’s dungarees and the electric lights strung across the square in the second Act are a little out of kilter with that. There is plenty of activity among the villagers, people sitting in the windows of the building, or even coming into or out of them. Quite a commotion is caused by the arrival of the dandified Dr Dulcamara, with his potions and quack remedies transported in a cart. His clownish assistant projected witty images of the doctor demonstrating his elixirs onto the door whilst Dulcamara described his products to the crowd. 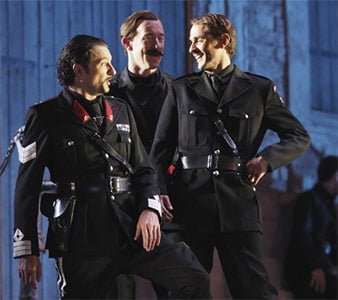 In between these public scenes, there are longueurs where the characters acted relatively little and so the action rather came to a halt. Dulcamara’s Assistant is the obvious exception. This commedia dell’arte type figure (with no music to sing) is given plenty of humorous mime, such as pretending to be the doctor’s pregnant wife so as to demonstrate the effects of the love elixir. The orchestra too joined in the fun of such moments, although there were times when it failed to maintain this momentum. More energy would have moved things along, particularly in the choruses – though the singing was certainly ebullient – and the bassoon accompaniment and clarinet interjections in Nemorino’s ‘Una furtiva lagrima’ could have been more haunting.

Generally the principals were engaging. Christopher Tiesi caught Nemorino’s character as simple and well-meaning, though his passion for Adina was no less warm for that. His singing expressed those feelings, though sometimes sounding a little forced in the upper range, but this was certainly a likeable realisation. So also was Joélle Harvey’s Adina, with her attractive, seamless soprano, but perhaps a little too innocent, as for instance when she teased Nemorino in Act One that her desires are not constant. In his slick, black carabinieri-like uniform, Alessandro Luongo successfully conveyed Belcore’s braggadocio with sonorous, overbearing tones – very much the opposite of Tiesi’s quiet sincerity. Riccardo Novaro, as Dulcamara, could have projected his voice more in order to give the character greater presence, but his fast despatch of considerable mouthfuls of words in some ensembles was undeniably impressive. In her brief appearance as Giannetta, Sadhbh Dennedy sang radiantly.

Glyndebourne’s customary high standards were evident throughout and the performance provided an enjoyable evening. A touch greater panache and suspense was needed though.