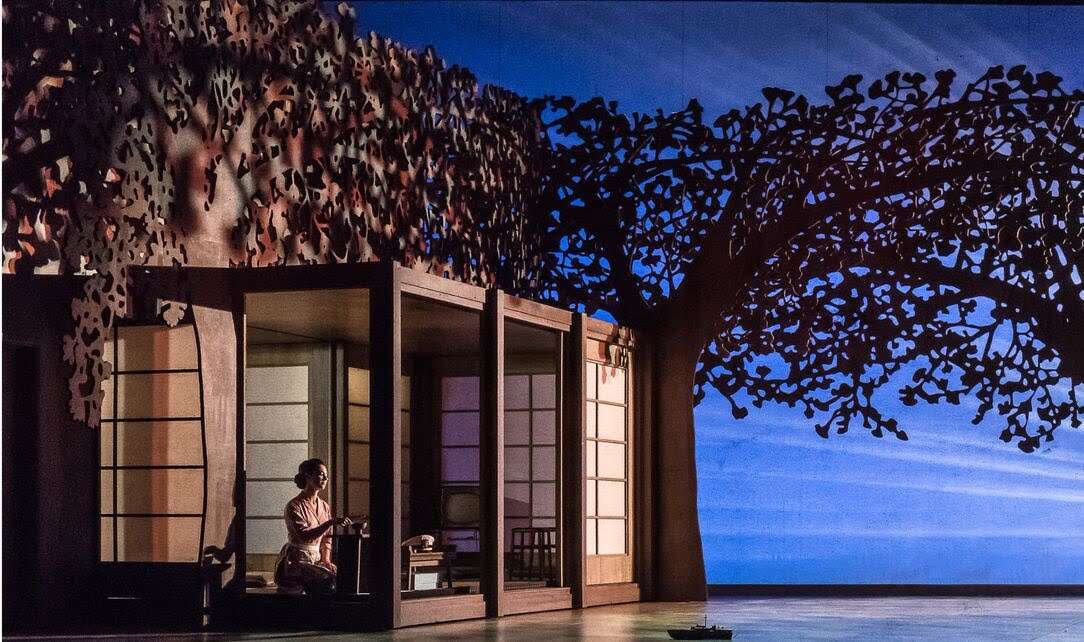 This touring production of Puccini’s Madama Butterfly is Glyndebourne’s first and is due to make its way to the Summer Festival in 2018. The opera is a sitting duck for a staging that shouts up Western appropriation of anything the West wants, but updating – as here, to the 1950s – loses the mystique of Japan, and the opera’s charting the process of loss of identity loses its edge.

Annilese Miskimmon has hurried the process along by fifty years; Nagasaki, where the opera is set, has presumably rebuilt itself after the atom-bomb of 1945; and we’re left in a tawdry world of the grubbier bits of Westernisation, specifically here the availability of Japanese child-brides to American GIs. Subtle it ain’t, and Miskimmon’s stance is ossified by some overemphatic point-making.

The whole of the first Act takes place in Goro’s Marriage Bureau rather than in the house on the hill Pinkerton has leased, the type of residence represented by an estate agent’s model in Goro’s office. When the Bonze, the keeper of traditional Japanese values, gatecrashes the wedding party to denounce Butterfly, he does so in a wheelchair; and, such is the power of their love, the walls of the Bureau fold back to reveal the starry night before Pinkerton guides his 15-year-old wife to a sleazy hotel for their wedding night. The set is overloaded with details such as Goro producing a wad of photographs of more GI-ready brides and showing a flickering film of the new wives learning the domestic rules of American life. 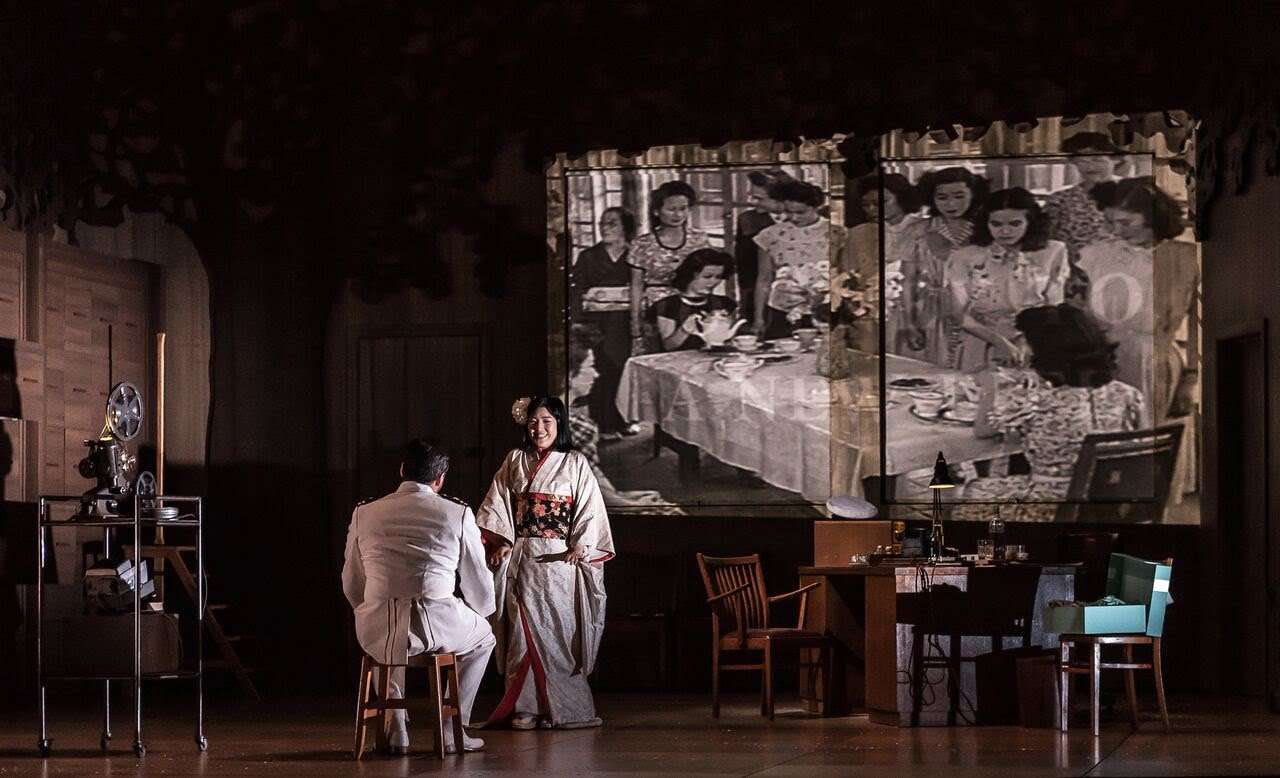 Miskimmon keeps the heaviest symbolism for the end of the opera, when Pinkerton’s real wife (he has married an American in the interim) gives Butterfly a present for her and Pinkerton’s son, a gleaming model boat that the child instantly prefers to his bashed up and smaller one. The process of appropriation is complete. The sight of European women in kimonos getting down and dainty as geisha-girls can be an embarrassment, but Kally Lloyd Jones’s direction was consistently unobtrusive.

Nicky Shaw’s designs are well-observed, especially the 1950s’ clothes worn by Butterfly as a thoroughly modern American woman. The two-dimensional cut-out trees, although good in atmospheric silhouette, won’t win awards, and the cherry-blossom business for Pinkerton’s return to Nagasaki is terribly laboured.

Musically things are on much firmer footing. The South Korean soprano Karah Son manages Butterfly’s fast-forward from girl to mother convincingly and she looked suitably both vulnerable and heroic in her tailored two-piece. Her ‘Un bel di’ was powerful enough, but she was even more in command of the rest of Act Two, with her lower voice gathering in richness. As Pinkerton, Matteo Lippi was all seduction in Act One and sang gloriously, and somehow he made Pinkerton’s thoughtless entitlement entirely credible. 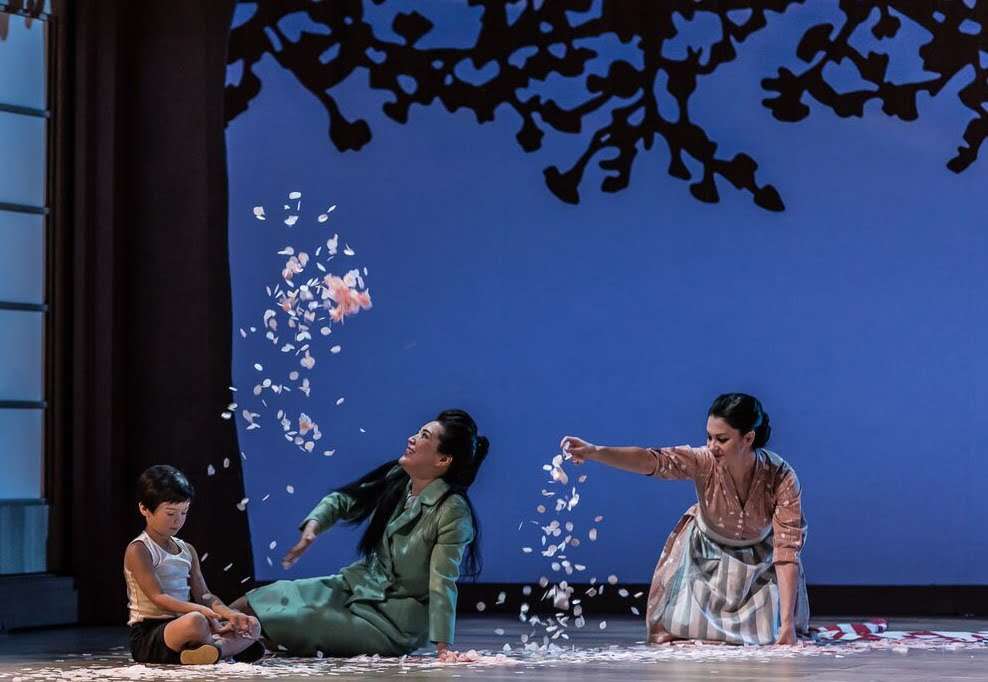 Francesco Verna’s equally distinguished singing was let down by perfunctory, wooden direction – the role can, should be intensely moving. Alun Rhys-Jenkins delivered a lethally spivvy Goro, Michael Druitt was the baleful Bonze, and there was a particularly touching Suzuki from Claudia Huckle, reconfirming the beauties of her warm, light mezzo. Marta Fontanals-Simmons as Kate Pinkerton was a striking, Kim Novak-type ice blonde.

All the singers benefited hugely from the attention taken by John Wilson, who also underpinned the production with uncanny perception, highlighting Puccini’s orientalisms just enough for us to realise how the symphonic sweep later in the score can’t help obliterating them, and he got great results from the Glyndebourne Tour Orchestra.