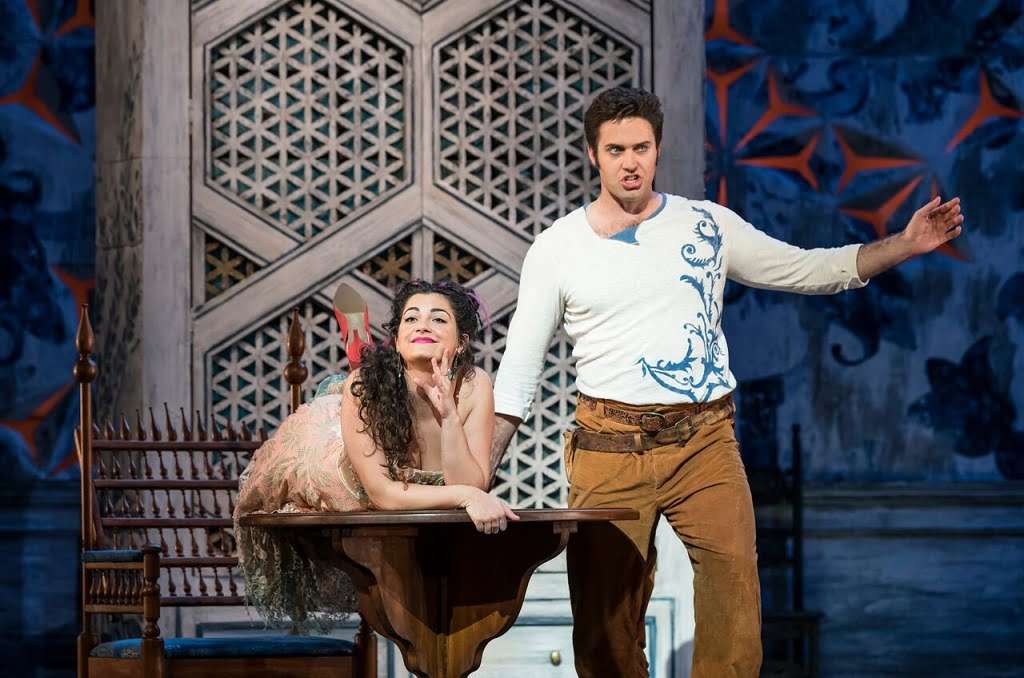 Everything pretty much comes together in this hilarious revival of Annabel Arden’s production of Il barbiere di Siviglia, which in 2016 was Glyndebourne’s first for over thirty years. From the Overture’s polished string-playing to the dazzling ensemble close it is a delight. The cast is mostly new with Rosina now sung by a mezzo, as Rossini intended.

Much of the success belongs to Sinéad O’Neill, whose excoriating influence has achieved a terrific sense of pace in the uninterrupted musical trajectory and the deft handling of knockabout elements; here comic additions are never intrusive for the sake of it, and as Arden has observed, the work’s “playfulness, theatricality, light and movement … is all based in the music”. From O’Neill there is still slapstick, but it’s never overegged and the Chaplinesque antics from three superb actors is slick and without distraction.

Moorish Spain is nicely conveyed in Joanna Parker’s stylish backcloth, where blue-and-white tile patterns and an illuminated bird are eye-catching, aided by David Manion’s varied lighting. Also attention-grabbing are the 1950s’ costumes, with Count Almaviva as Lindoro sporting a silver trench-coat (not an ideal way to suggest an impoverished student), while Bertha’s prim checked suit belies her saucy behaviour and less-than concealed lingerie. 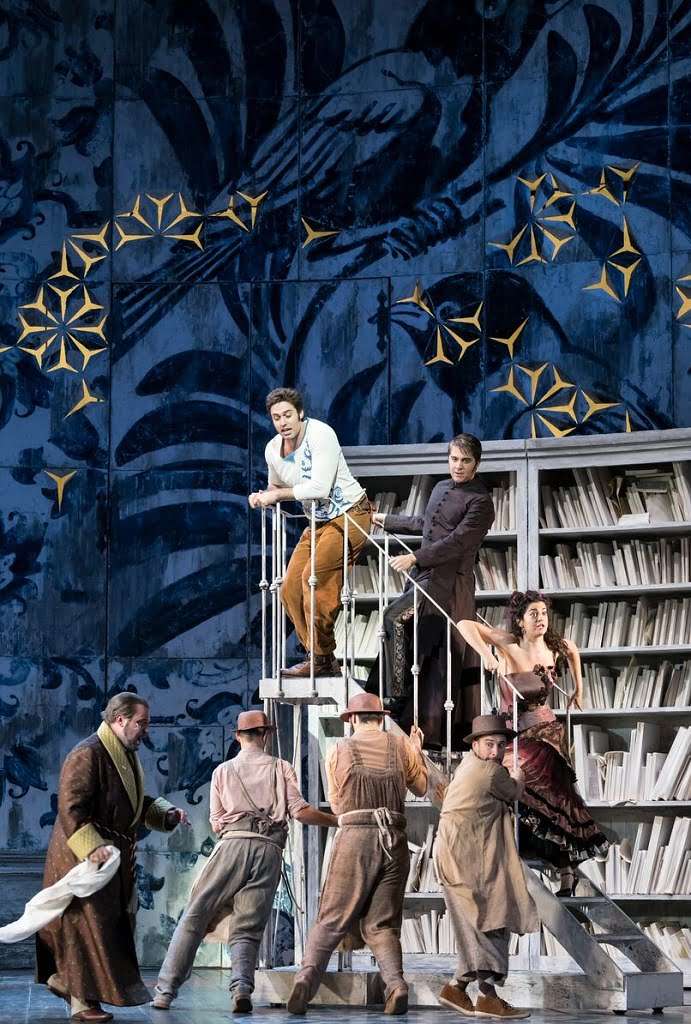 A raised balcony, decorated wardrobe and elevated shelving in the music-room provide most of the essential furnishings around which a strong cast makes its presence felt. My only real quibble is the delivery of ensemble set-pieces – however scrupulously prepared – from the front of the stage and mostly singing directly at us with little or no interaction with one another and a subsequent loss of chemistry.

That said a rich-toned Tobias Greenhalgh (Figaro) had ample stage presence; more witty than self-important, and he knocked out ‘Largo al factotum’ with ease. Less compelling was the one-dimensional Jack Swanson (Almaviva) whose opening ‘Serenade’ (with stylish guitar support from Daniel Thomas) was technically secure if solid. He came alive much more in Act Two and the music-lesson scene and his duet with Marco Filippo Romano (Dr Bartolo) were standout moments. Anatoli Sivko (Basilio) is an impressive music-master, mobile of face (with faint echoes of a young Vincent Price) whose sneering grin lent much to his superbly articulated ‘Slander’ aria, its rumour-spreading text heightened by clouds of smoke wafting from beneath his cassock: comedy gold!

Laura Verrecchia (Rosina) is a sassy ward to the restrictive Bartoli, both playful and menacing in ‘Una voce poco fa’, and if her low notes are too plummy there’s plenty of sparkle higher up. Janis Kelly (Bertha) produced a pearl from her single aria – and made clear that this ageing spinster is still up for it.

Ben Gernon drew considerable energy and precision from the excellent Chorus and Orchestra; the latter’s nuanced playing (with a brilliantly etched thunderstorm) gave the impression this music is in the players’ bones. Recitatives are fleet-footed with Ben-San Lau’s florid accompaniments on a silvery-toned fortepiano a bonus.

On this showing, Rossini’s comedy of class and manners remains a masterpiece, its felicities fully realised.