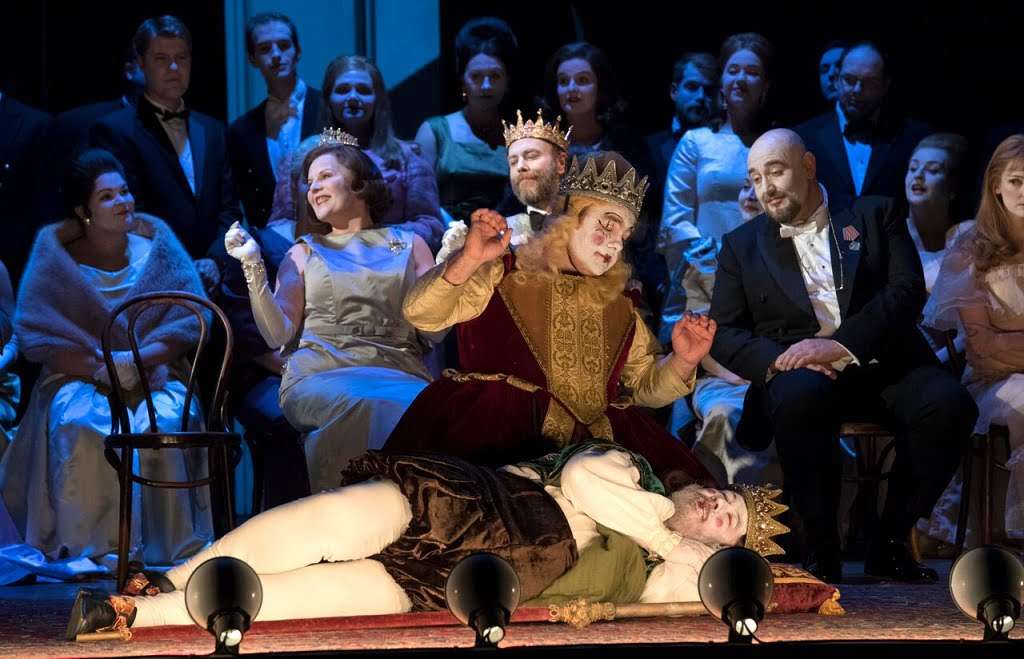 It’s strange that Shakespeare’s most psychologically complex tragedy has trumped so many opera composers, despite ticking so many opera boxes. There are over sixty versions out there, with only Ambroise Thomas’s currently anywhere near core repertoire – and I occasionally wonder when Humphrey Searle’s vast serialist outing (mounted at Covent Garden in the 1960s) last saw a stage.

Brett Dean’s take on Hamlet (first seen during this year’s Glyndebourne summer festival) manages the transfer to opera with resounding success via Matthew Jocelyn’s clever filleting and conflation of the play (based on mixed editions). He cuts Fortinbras completely and most of Act Four and teases our Hamlet expectations with fragments of the hero’s famous soliloquy, mentions of angels and a much-repeated tag “The rest is…” completed only at the very end. 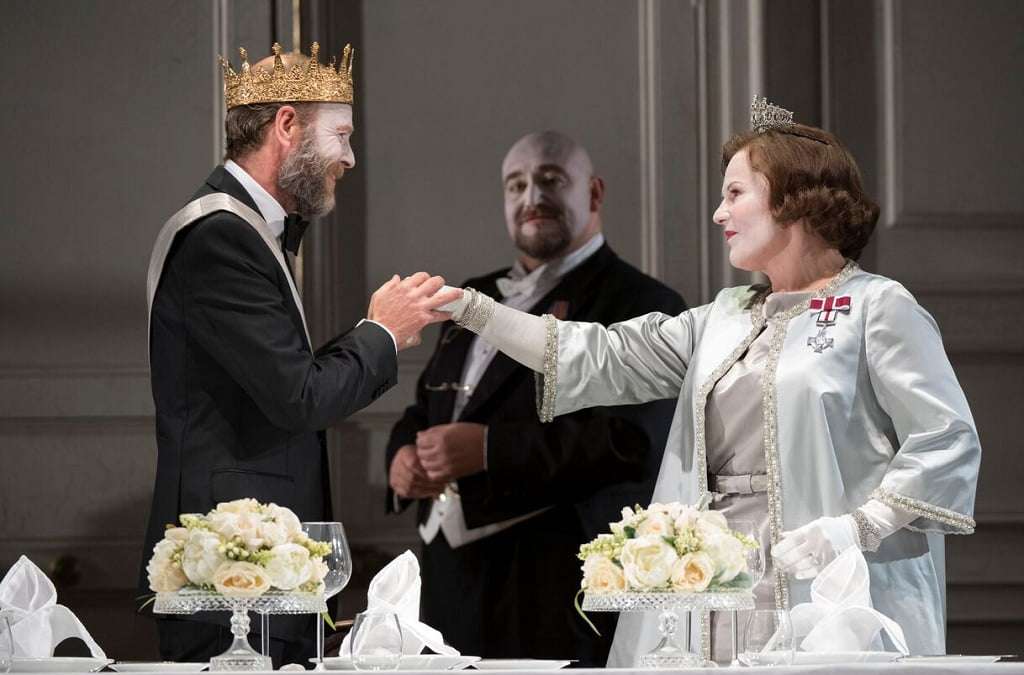 Jocelyn’s editing is eminently music-friendly and very tight – if it were performed without the music it would have a cartoon-like directness – and while his word-games and his reassignment of familiar speeches to different characters may seem contrived, it provides Dean with a sort of Hamlet fantasy that honours the original.

There are moments in the first half (the best part of two hours) when you might begin to wonder where Jocelyn’s priorities, mainly to do with characterisation, lie, but that is not a problem with Dean’s music, which goes behind the text to explain characters disintegrating in a plot of Oedipus-like entrapment with devastating accuracy. If his score – with some brilliantly imagined electronic effects, groups of players and chorus dotted through the auditorium and, in the crucial Players’ scene, a marvellous role for accordion – doesn’t hum with tunes, it does so with atmosphere.

The vocal lines generally suit the words and the singers’ ranges so that there is a near-perfect music-theatre balance. Best of all, of all the productions or films of the play I’ve seen, Dean and Jocelyn get closest to an unremitting neurotic tension that infects the whole with extremes of bi-polar clarity and delusion – and, crucially, there are moments when the drama takes you by the throat, particularly so in Act Two, when Ophelia’s madness, her reported suicide and the ensuing grave-scene distress us on an epic scale. 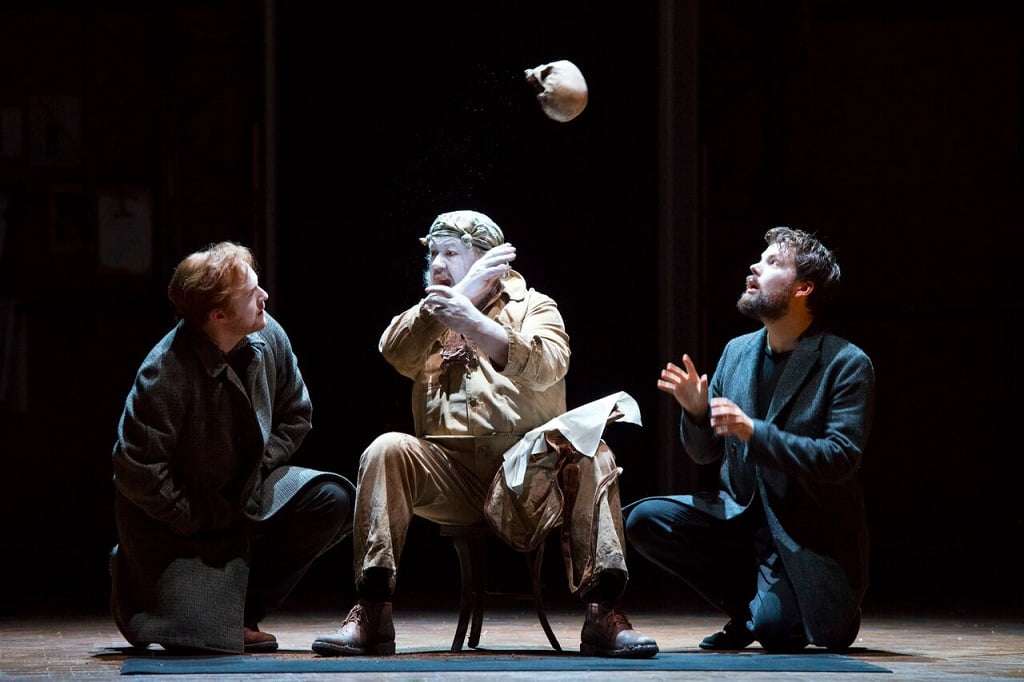 David Butt Philip (he played Laertes in the summer run) triumphs, if that’s the word, as the prince, a bravura, deeply-felt performance of a man on the edge, searingly sung and acted. Indeed, the acting is so gripping that I often found myself deferring to that rather than to the music. You could see and hear Ophelia’s fragile wits unraveling in Jennifer France’s disturbingly realistic portrayal, and her hopeless relationships with both Hamlet and her pompous father Polonius (brilliantly judged by Jeffrey Lloyd-Roberts, bumbling along as though he’s the only one in step) are tear-jerking stuff. Claudius, presented as a king who never dares take his crown off, is played by William Dazeley with a queasy mix of unease and aggression, and Louise Winter’s excellent Gertrude develops into an incisive study of a woman getting further and further out of her depth. Brian Bannatyne-Scott is vividly cast as three agents of death – the Ghost, the Player King and the Gravedigger, Gavan Ring’s Horatio is so close to Hamlet as to be his guardian angel, and Rupert Charlesworth is a noble, heroic Laertes. Rosencrantz and Guildenstern played by countertenors as a Gilbert and George-style double-act backfires as comic light relief, but they are engagingly duplicitous – and they are well and truly dead by the end.

The chorus’s music has some wonderful merges into the orchestra , and the playing in the pit, guided by Duncan Ward’s poised and detailed conducting, is completely on song with Dean’s demands. The cinematic scene-crowding is directed with relentless panache and gives the illusion of activity. The rare moments of unabashed lyricism – there is a flash of Peter Grimes-like intensity near the start – made me wish for some more reflective music, but I came out of Dean’s Hamlet enthralled and moved.