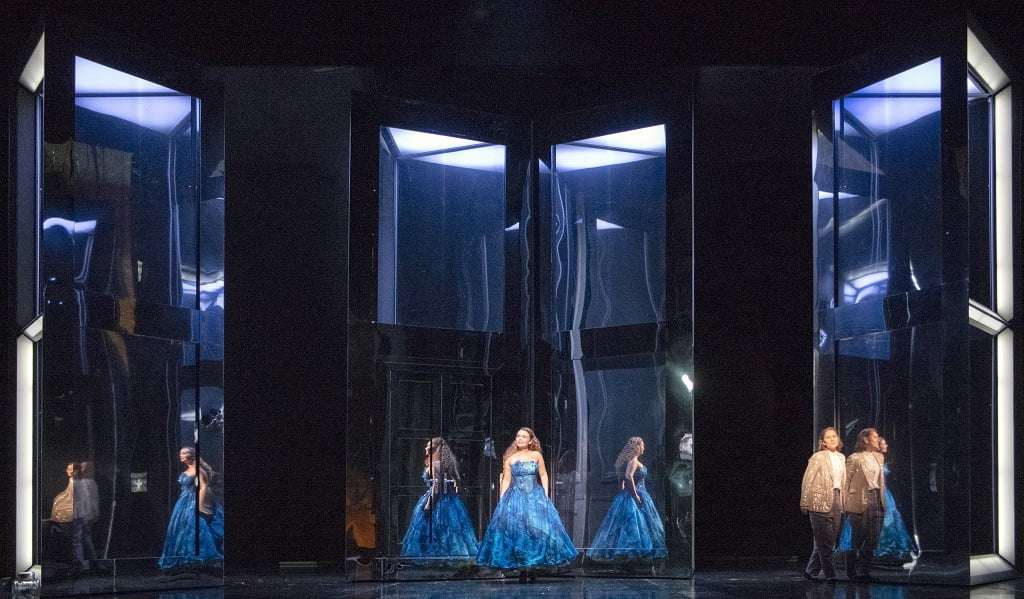 Massenet’s Cendrillon was a triumph at its Paris premiere in 1899, but, like other Massenet operas, it has not exactly thrived. In the British Isles over the past twenty-five years or so, it has appeared at Wexford, WNO, Royal Academy of Music (twice) and in a star-studded Laurent Pelly production that touched down at Covent Garden in 2011. Three of my opera reference books don’t even mention it. As far as Massenet is concerned, Manon and Werther rule, with Don Quichotte a long stop.

Fiona Shaw’s new staging for Glyndebourne (its first), on tour this autumn then at the 2019 Summer Festival, has provided Perrault’s Cinderella story with contemporary stiffening and an Angela Carter-ish fairy-tale reinterpretation that captures its sadness and comedy. Nicky Gillibrand subversive costumes give constant pleasure, and Jon Bausor’s set is a hall, either in Cinderella’s father’s castle or in Prince Charming’s palace, which easily transforms into a hall of mirrors, in which you are never sure who or what is being reflected back to whom or what, the illusion heightened by the big shadows cast by Anna Watson’s excellent lighting, and Shaw elides dream, sleep, fantasy and reality with great skill and lightness of touch. 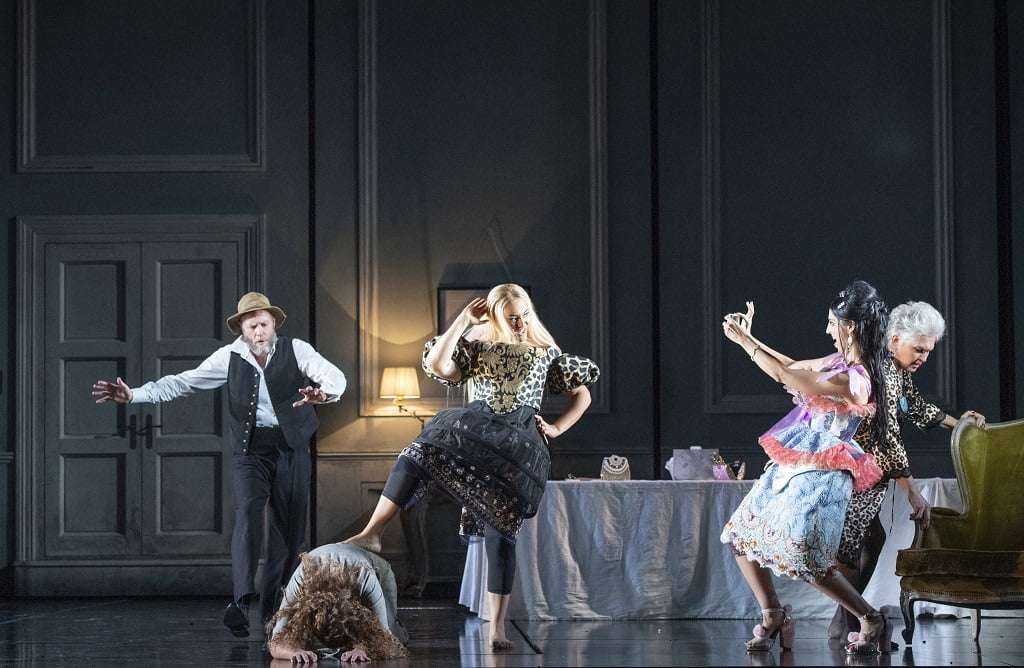 Within the bare bones of the familiar panto story, Shaw’s staging consistently keeps in touch with the floating world of innocence and the siren call of experience, and if there are instances when you might not get an allusion – they come thick and fast – there are others, particularly to do with her no-nonsense, sympathetic view of childhood, that hit home with that tear-jerking shock of recognition. There is also much humour, primarily down to Cinderella’s stepmother Madame de la Haltière and daughters Noémie and Dorothée, here a trailer-trash trio of slapstick vulgarity, incidentally completely at odds with Madame’s reminiscences of her centuries-old ultra-noble family, and thoughtless rather than deliberately cruel to Cendrillon and her poor old father. Botox jabs and incessant pouty selfies play a crucial part in their preparations for Prince Charming’s ball. Cendrillon’s transformation into a beautiful princess is a delight, and it is not a spoiler to note that, during the short prelude, set in a swanky shoe shop – shoes, for obvious reasons, are fetish objects throughout the evening – we get a glimpse of the child Cinderella with both her real parents, her mother later appearing as the Fairy.

Massenet’s music comes in for a lot of stick for being ingratiating, light and sweet. Yet it has a fluency that goes off in many unexpected directions, the Baroque pastiche – in Shaw’s staging, at least – takes on an attractive, sly irony, and its irresistible tunefulness cleverly matches the libretto. And then, in Act Three in a break from the traditional story, Cendrillon – sans dress, sans glass slipper, sans everything – runs out into the Winter forest intending to die of hopeless love for her Prince and is magically saved, and Massenet comes up with music as passionate and muscular as anything in Werther, matched by the equally magic insight and ingeniousness of Shaw’s staging. 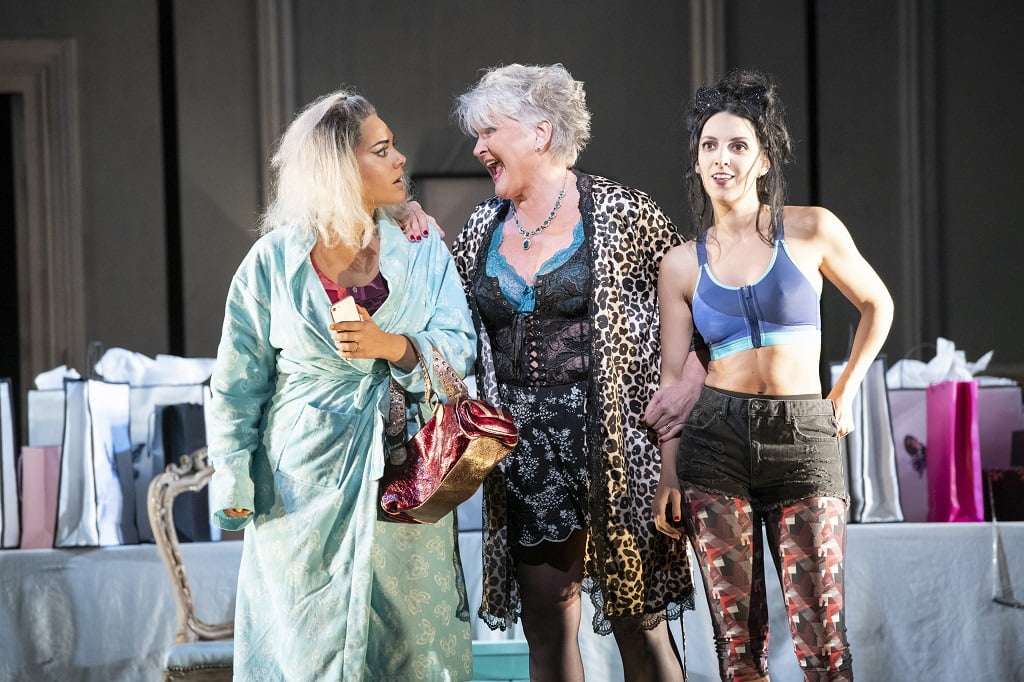 The predominantly female singers are strongly cast. I’d have liked a bit more warmth to Alix Le Saux, but as a whole her Cendrillon has the right sort of Arthur Rackham-like fairy-tale distraction and elusiveness – half-character, half-stereotype, all pathos – and her Prince Charming, Eléonore Pancrazi, is also a find, with a lovely, seductive mezzo and looks that, for a britches role, suggest eroticism rather than state it. Agnes Zwierko’s Mme de la Haltière is a gorgon in a mauve-velour tracksuit with, considering the role, an attractively mellow rather than formidable voice and has an appalling brace of daughters in Eduarda Melo and Kezia Bienek.

As the Fairy – that is, Cendrillon’s Fairy Godmother – Caroline Wettergreen delivers the show-off coloratura with pinpoint panache, and I very much take to her mix of exasperation with and love for Cendrillon. William Dazeley maintains an exhausted gravitas as the hapless Pandolfe and sings beautifully in his duet celebrating the return of Spring with his daughter. The Fairy’s spirit-band of dancers supplies mischief and menace, and there is a lively chorus of maids, footmen and courtiers. There are all sorts of orchestral highlights, including a concert mystérieux for lute, viola d’amore and crystal flute and a Spring pastorale from the back of the auditorium, and Duncan Ward and the orchestra have the measure of the score’s transparency, fluency and sinew. Fiona Shaw directed an unforgettable Rape of Lucretia for Glyndebourne five years ago; this Cendrillon is in that league.