Dvořák
Rusalka, Op.114 – Lyric fairy-tale in three acts to a libretto by Jaroslav Kvapil, based on the fairy-tales of Karel Jaromír Erben & Božena Němcová and the tale Undine by Friedrich Heinrich Carl de la Motte Fouqué [sung in Czech with English supertitles] 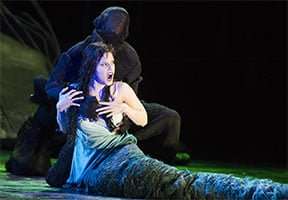 So strong was its impact that I’ve half a mind to stalk Rusalka as she makes her forlorn, damp progress through England as part of the Glyndebourne Tour. Melly Still’s production has been seen twice, during 2009 and 2011, in Glyndebourne’s summer Festival season, but this is its first Tour.

If memory serves, Rae Smith’s adaptable set and Paule Constable wonderful lighting haven’t been specially tailored for travelling, and the trailing half-animal, half-vegetable mermaid-tails for the water-sprites have lost none of their wow factor and are manipulated with impressive realism by a team of black-clad puppeteers.

Melly Still’s approach to this classic fairy-tale, about the water-sprite that falls in love with a human prince with terrible consequences for them both, is basically traditional and non-concept. More importantly, Still’s staging is saturated with the sort of insights that make it a pleasure for the audience to psycho-analyse this particularly rich story. And it goes further, and mirrors our preoccupations with sexual obsession, rejection, the danger of getting what you pray for, psycho-sexual agendas galore, and does so with a vitality, humour and intelligence that pile on the flashes of recognition the staging is so prodigal with. It’s easily in the distinguished league of Glyndebourne’s classic productions. 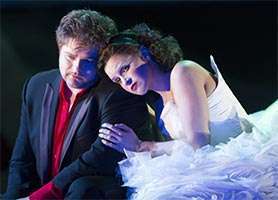 The singing was electrifying, too, dominated by a strong contingent of Russian and East-European artists. As Rusalka, Natasha Jouhl looked vulnerable and ethereal, and her ‘Song to the Moon’ opened the floodgates to an overall thrilling performance – the finales to Acts Two and Three were unbelievably powerful. Peter Berger’s Prince matched her for intensity, and his big, focussed tenor was heroically tireless. Their ‘liebestod’ at the end of the opera was so powerful I didn’t know where to put myself. 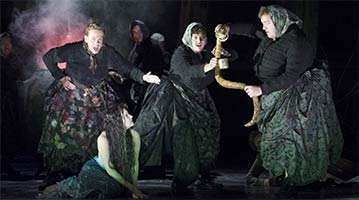 Vodnik, Rusalka’s water-sprite father was delivered with priapic energy and menace by Mischa Schelomianski; there was a superbly half-comic, half-deadly Ježibaba from Anne Mason (along with a group of colossal, Les Dawson-style witches, all with ballooning boobs, beards and terrible identical headscarves); and the icily blonde, voluptuous Foreign Princess, poor Rusalka’s nemesis, was dangerously acted and sung by Tatiana Pavlovskaya – In another life, she’d have been right up Alfred Hitchcock’s street.

The costumes for the Act Two ball are sensational and original, the direction of the wood-nymphs earthy and wildly funny, the set and lighting instantly evoking the fairy-tale veil between the human and the dark ‘other’ world. What drew this all together, though, with such force was the incandescent conducting of Jakub Hrůša, the young Czech conductor whose three years as music director of Glyndebourne Tour ends this season. Everything from Wagnerian grandeur to the edginess of Janáček flowed out of Dvořák’s magical score, and Hrůša made you aware of how acutely the music is tuned-in to every detail of the drama. This was opera-conducting of a very high order, matched by responsive, febrile playing from the orchestra. This Rusalka is quite a show.