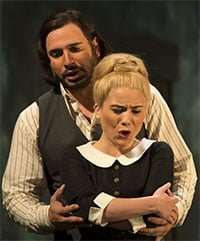 The journey starts here – at home. Glyndebourne Touring Opera is at first base until 21 October in the away-from-it-all country setting (where music, picnics and balmy breezes combine for a special experience) and performing in the splendidly immediate and truthful acoustics of the House itself; and then on the road (with occasional changes of cast), ending in Stoke-on-Trent in early December. It’s all to the good: taking opera to the people in seriously high-quality productions. This time the travelling works are Le nozze di Figaro, Rusalka (Dvořák’s wonderful opera in an equally wonderful staging) and, something new, Julian Philips’s The Yellow Sofa. It’s a pleasing through-the-ages mix of repertoire.

Whether for the novice or the seasoned operagoer, Mozart’s Le nozze di Figaro is always a treat, for there is invariably something to (re-)discover in it, and as an introduction to opera as an art-form, it’s right up there with, say, Carmen and La bohème in having an easy-to-follow and involving story crowned by some magnificent music. 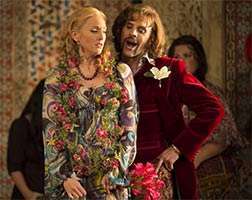 Figaro bubbles with more than its fair share of memorable arias, some that charm, some that exhilarate, and some that touch the heart. Musically, Mozart’s legacy is in the sure hands of a fine GTO troupe. If the familiar Overture (which Mozart left to the last moment to compose before the work’s unveiling) was on this first-night just a little unsettled (it’s a tricky number!), all was soon in place, the orchestra playing with character, sensitivity and support. The recitatives benefitted from Ashok Gupta’s characterful continuo contribution on a pearly-sounding fortepiano and Jonathan Tunnell made much of the violoncello’s role. Jonathan Cohen’s lively conducting (arms flailing, sometimes visually clawing his way through the score) kept the action on the move, but without undue haste, and he ensured sympathetic orchestral underpinning, not least for those arias in which inner feelings are poignantly revealed.

The production itself is often delightful and will prove truly popular. That said, one expected more from Michael Grandage’s direction, here revived by Ian Rutherford. Grandage’s conception was first seen at this year’s Glyndebourne Festival Opera season, and is slated for next year, too. Grandage’s debut as a director of opera was in 2010, Britten’s Billy Budd, and it set the bar very high – it is one of the truly great opera productions (and it too returns to Glyndebourne next summer). Grandage doesn’t quite emulate the same success with Figaro. As revived, the 1960s’ setting works well enough, the decade of the hippy, the ‘beautiful people’, flower-power and weed-smoking … the big-collar vividly coloured shirts, the equally garish trousers and the droopy moustaches. Less convincing are some of the over-played farcical moments and the twee motions, all too obviously played for laughs – and getting them here! The English translation, as super-titled, is a bit too trendy and doesn’t always do justice to Da Ponte’s immaculate libretto. 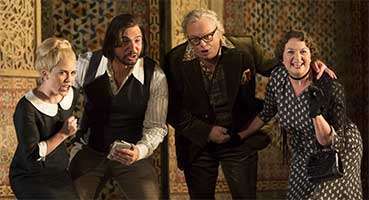 On this first-night, Act One proved a little too much to be scene-setting, some singers still bedding-down (no pun intended). Neither Susanna nor Figaro (they are betrothed) quite established themselves, a reaction set into relief with Kathryn Rudge’s superb stage-stealing Cherubino (a woman playing a man who is later disguised as a woman!); ‘Non so più’ was ideally paced, without bluster and breathiness, deftly accompanied.

Act Two brought greater focus and the first appearance of the Countess, and her tale-telling single bed. Layla Claire brought out the Countess’s heartache, both in body-language and vocally, the arias creamily phrased for maximum pathos. By now, Figaro was coming across as likeably roughish, Guido Loconsolo bringing weighty authority (and a villainous smile) to his singing, and Joélle Harvey’s Susanna was really sparkling, her loyalty (as maid) to the Countess never in doubt. Less convincing as an individual is the Count, here a bad-tempered playboy (one wonders how he’s made his money) who has no particular interest in his good lady (save to humiliate her) and whose repentance at the end of the opera comes out of the blue and seems hollow, even though John Moore’s singing at this point is mellifluous and sincere. The very tall Sion Goronwy plays Antonio, the gardener, as a tad too blustery, but it is impossible to forget the subtle humour and underplayed bemusement of Jeremy White, a stalwart (every performance) of Royal Opera’s David McVicar-directed much-revived 2006 production.

The setting for the various alliances, deceptions, farces and enlightenments is a big house, fairly suburban it seems (we get to see what happens behind the closed curtains!), with a big-enough ‘outside’ for the final Act’s night-time partying, liaisons and reconciliations, plant-pots to the fore (the action plays out from the dawn to dusk of a single day). In Act Three, the Wedding itself goes with a swing – a double ceremony in fact, for Figaro’s just-discovered parents also get hitched! – and if some gyrations (all seen before, somewhere, and somewhat juvenile, although it could be argued that the Count is rather immature) test the patience and leave one stony-faced, then there is some lovely singing, energetic stagecraft and meaningful interaction to relish. Lighting, costumes and props all contribute to the many pleasures of a production with long legs that will travel well and delight many, especially opera newbies.