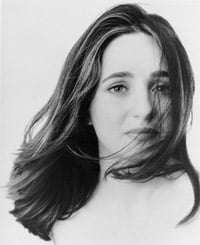 Simone Dinnerstein played Bach on a Steinway, in a lyrical, flowing, surging presentation. She made no apology for the piano not being a harpsichord, nor – despite of her admiration for Glenn Gould – for attempting to make this six-foot grand sound like one. Equally, she eschewed the broad-toned, lush, organ-like, late-Romantic swell of Busoni. Very much her own woman, she gave us Bach in the cool, early-Romantic style of Mendelssohn. The long, 30-Variation piece became a monumental journey of the soul. She probed multifarious aspects of the human heart with an astounding blend of emotional insight into the human condition and clinical curiosity as to how this insight might be most effectively expressed.

In November 2005, a writer for the New York Times perceptively likened her performance of the Goldberg Variations to Schubert’s “Winterreise”. The infinite and tender sadness of her opening (and closing) ‘Aria’ lingers in the mind unforgettably.

In between, with restraint in ornamentation but meticulous attention to repeats, she took us through an emotional landscape of great variety. We had gentleness and delicacy, brittleness and vigour, rich inner voices and sparing utterance. (In particular, the inner voices rang out like carillons at last given their voice.) We had self-communing simplicity; we had virtuoso panache. Her fingers could caress as if stroking the petals of miraculous flowers; they could sting like hail; sometimes they seemed to move faster than the speed of sound; at least once, they became hard, steel rods.

And what of Johann Sebastian? Was he there, too?

Many would say not. Certainly, the grandeur of 19-century inauthenticity was absent; nothing in Dinnerstein’s performance dragged under the weight of its own striving to be impressive. Yet, equally, the fleet inconsequentiality of ‘objective’, ‘authentic’ performances was also absent. Perhaps, the most stylistically daring feature of this Goldberg was to claim (or is it re-claim?) a rippling flow for Bach, with a strong emotional undercurrent.

One might say, too, that this was a very feminine presentation of Bach, recalling the wayward charm of Wanda Landowska rather than the brittle vigour of Rosalyn Tureck.

I left this performance certain that I had heard an outstanding musician of independent sensibility. Simone Dinnerstein had given to Bach her all – and illuminated him in an experience quite out of the ordinary, on a journey that had been both spirited and spiritual. She has recorded this monumental work for Telarc.