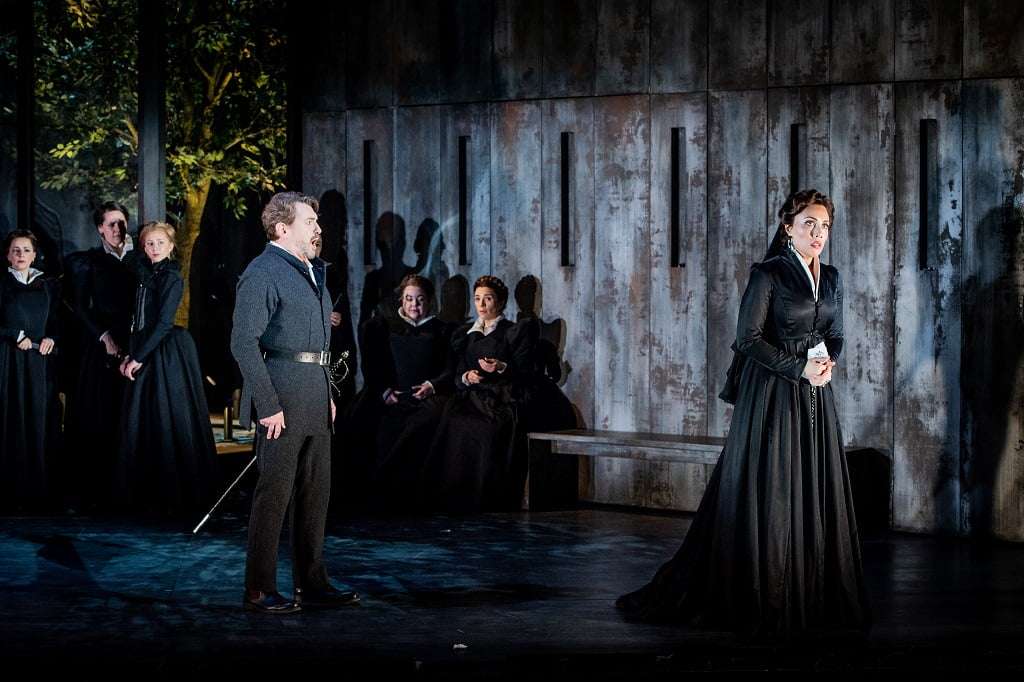 This is one of Grange Park Opera’s infrequent revivals, bringing back a well-received production unveiled in 2016 at The Grange. Its director, Jo Davies, may be best known for her musicals – Kiss me, Kate must have been seen all over the country by now – but she has the measure of Verdi’s solemnities and the show adapts well to the evolving environment of the Theatre in the Woods. The venue now boasts a contiguous colonnade as well as separate “lavatorium rotundum”. The gardens are thriving. Inside all is darkness.

Like Daniele Abbado’s recent staging for the Wiener Staatsoper this Don Carlos is a claustrophobic affair, the oppressive atmosphere established from the start, thanks in part to the (otherwise regrettable) omission of Verdi’s open-air evocation of the forest of Fontainebleau. The narrative is, as ever, compromised without the first Act. On the other hand we did have trains to catch! 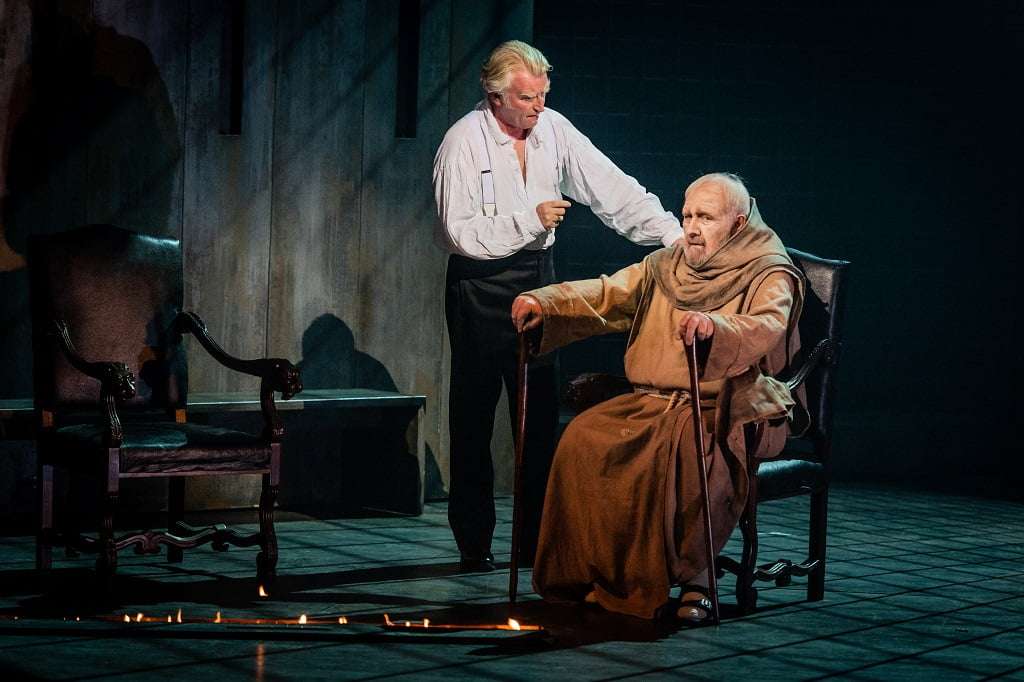 In lieu of big-theatre pageantry, Davies hems us in physically and spiritually. Leslie Travers’s set consists of brutalist concrete slabs, as much QEH as the Escorial but cleverly alluding to palace, prison or piazza. With colours so dark and muted, the reliance on candle-lit processional might sound predictable yet the effect is often genuinely haunting. Might visibility be an issue for those in more distant seats? There’s a similar conservatism about the work of movement director Lynne Hockney yet here too a straightforward approach pays dividends. The auto-da-fé scene, deploying relatively modest choral forces on two levels with a flaming wood-pile in the centre, is brilliantly achieved by the whole team. This is strong, sinister meat for country house opera, easily topping the insipid burning of condemned heretics in better resourced houses. Gabrielle Dalton’s costumes are mostly jet black or nearly so. That they are sometimes contemporary rather than in period matters less.

In such a well-balanced cast it is perhaps invidious to single out star performances. Two key members (along with the conductor) are veterans of the 2016 run. Ruxandra Donose, reprising her extraordinary portrayal of the scheming Princess Eboli, proves both vocally sumptuous and adept at conveying the character’s unlikely range of emotions. As Filippo II, Clive Bayley, in dryish voice, still manages to convey the plight of the ageing autocrat, a reluctant and unhappy kind of monster, buffeted by the demands of church and state and denied love. Though physically right, Branislav Jatic’s Grand Inquisitor lacks the vocal heft to intimidate him believably. The audience gave him a boo-hiss curtain call which is not to say that his depiction is that of a pantomime villain.

The most Italianate voice is that of rising tenor Leonardo Capalbo in the title role, his ardour wearyingly insistent in the early stages, later settling into a convincing portrayal. He has the vocal chops to go far. There is incidentally no summary trial in this production. Nor is the main character dragged into the tomb at the close, never escaping the turbulence of the world, alive or dead. 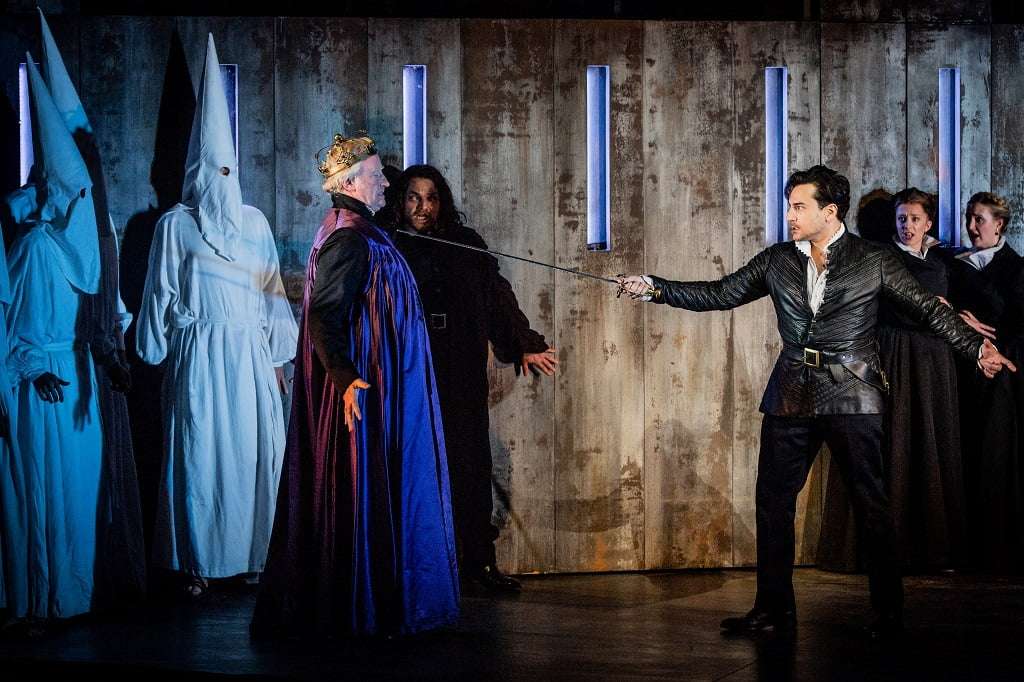 Another newcomer, Marina Costa-Jackson, is a vibrant Elisabetta. The more established baritone of Brett Polgato does not disappoint as Posa even if one has heard him sing with greater focus. David Shipley, vocally just as convincing as the shadowy Commendatore-like figure who may or may not be a monk, the ghost of Carlo V or the emperor himself, falls victim to the production’s only misstep, returning (spoiler alert!) in shining albeit inflexible armour for reasons unexplained and plainly uncomfortable. But then ambiguous denouements are there to be rewritten – perhaps.

The Milan version begins awkwardly for any orchestra and audiences love to cough during such spare textures. After a slightly tentative launch, the ENO band nevertheless acquitted itself with distinction, the choir making up for its modest size with forcefully projected tone. The conducting of Gianluca Marciano is taut and swift rather than languorous, understandably so given the length of the first half, the balance excellent throughout, much assisted by the remarkable acoustics of the house.