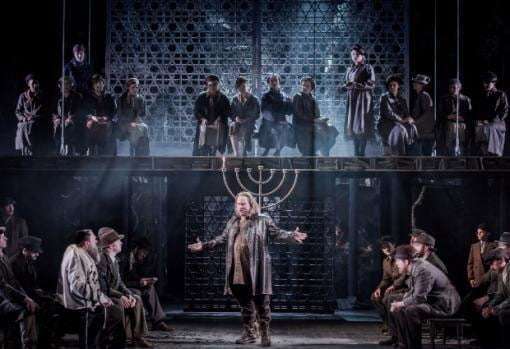 Although it fares well enough in Europe and the US, it’s been a while since Saint-Saëns’s biblical epic Samson et Dalila has graced the UK – the classic 1981 Royal Opera staging by Elijah Moshinsky and Sidney Nolan was last seen in 2004, there was a Scottish Opera staging in the 1990s, and the Sadler’s Wells one in the 1950s and 1960s.

It’s a wonderful score, up there with the Fourth Piano Concerto, the Third Symphony and the late chamber music, and though it creaks dramatically, it decisively tells the myth of the Jewish underdog Samson spectacularly overcoming the treacherous wiles of Philistine bad girl Delilah, thus restoring the power of the Hebrews’ Jehovah over the Philistines’ god Dagon, half-man, half-fish, all vengeance.

With such a conflict at its centre, the opera is a sitting duck for significant directorial intervention. Yet, rather than go for a period bang up to date, Patrick Mason has chosen the Nazi-collaborative Vichy regime in France during the Second World War as the vehicle for vigorous fascism and no less virulent anti-Semitism. Samson is a Jewish terrorist leader, Dalila a glamorous film star and privileged, duplicitous plaything of the High Priest of Dagon, here reassigned as a Chief Minister. 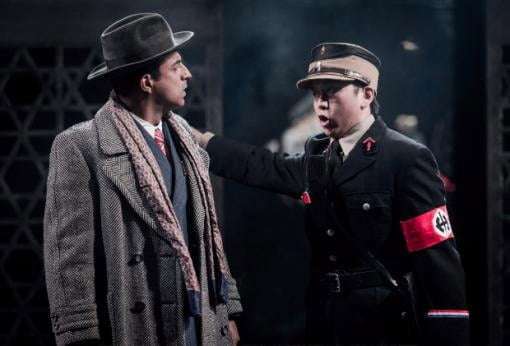 With its tottering heaps of books dominating the stage, Francis O’Connor’s set hints at Rachel Whiteread’s Holocaust Memorial in Vienna. The production’s building on hostilities ancient and modern isn’t so outlandish as to leak into concept, and the portrayal of the fascist elite’s self-confidence, elegance and casual brutality had the might-is-right ring of truth.

Crucially, the production has a formidable pair of singers in the lead roles. Carl Tanner, the US tenor who gave Grange Park an excellent Peter Grimes last year, has a similar triumph as Samson. A bit more abandon and savagery wouldn’t have been wasted – think of Jon Vickers in the role – but Tanner still had the grandstanding vocal resources to be superbly heroic and tragic. From his Henry V-style sinew stiffener to his fellow downtrodden Hebrews, his succumbing to Dalila’s charms resulting in his blinding and haircut, and his weighty ‘Vois ma misère’ in prison that opens the third Act, Tanner was in total command.

True, it’s the broadest of broad-brush roles, but one that he intensified in tandem with Sara Fulgoni’s luxurious performance of Dalila, fatal seduction oozing out of her beautiful mezzo. Her singing caressed the life out of Samson in ‘Mon coeur s’ouvre à ta voix’, and her portrayal as a corrupt consort to Michel de Souza’s excellent, Goebbels-like High Priest was sharply directed.

The opera’s other hit, the ‘Bacchanale’, was another clever piece of direction. Instead of a kitschy, orientalist and fleshy ballet, the fascist elite, surrounded by Nazi-style banners bearing the Vichy symbol, settled down to watch Dalila’s latest movie, for which the music is the soundtrack. With the poster a flaming Star of David, the imagined film was obviously a ripe slice of anti-Semitic propaganda. The climax was both a coup de foudre and de theater.

Samson et Dalila is a numbers opera, with clearly defined choruses, arias and ensembles, but Gianluca Marcianò conducted it with such sweep and momentum that you were barely aware of its conventionalism. The Bournemouth Symphony Orchestra caught the particular sensibility of Saint-Saëns’s orchestration and the music’s moments of languid melancholy superbly, and the Grange Park Chorus was terrific in the stirring ‘Israël! romps ta chaîne!’ (Israel, cast off your chains), which it is easy to imagine being pressed into service as a football anthem. Gripping stuff!