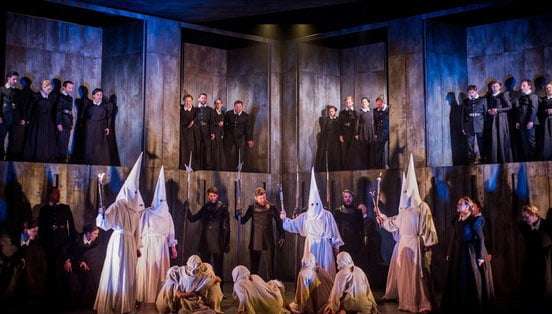 Verdi’s Don Carlo is Grange Park Opera’s final full production (there are two concert performances of Tristan und Isolde to come) at the theatre Wasfi Kani and her company have created from the romantic dereliction of the Grange in Hampshire, home since 1998. This year’s programme book is full of memories of past glories as well as material looking forward to the new home at West Horsley Place in Surrey, opening in June next year.

Whether in its five- or four-Act versions, productions of Verdi’s grand historical epic don’t swing by that often, and this broadly traditional staging is probably the most ambitious Grange Park has mounted. By some clever sleights of hand, director Jo Davies and designer Leslie Travers have made their version seem positively monumental, given the theatre’s relatively small space. The slate-grey surfaces of the set and the unrelenting black of the costumes evoke the joyless confinement of the Spanish court under King Philip II and the Roman Catholic church’s iron fist, and the design can be arranged to form palace, city square, garden or prison – not that in Davies’s gloom-filled vision of the work there is much relief in the impact of the various locations; the court ladies sweltering in the Spanish heat in a garden was just one imaginative touch. Anyone who has been to the Escorial palace-monastery outside Madrid will recognise where her inspiration lies. 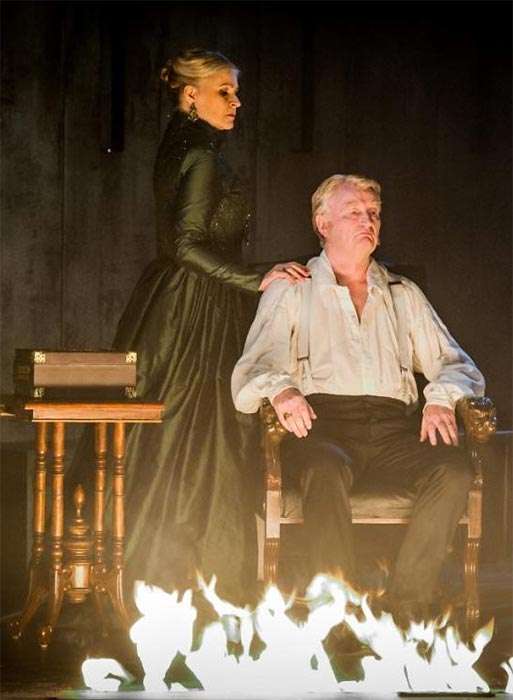 Schiller’s and Verdi’s romanticised and sensationalist take on this slice of 16th-century Spanish history pushes politics between church and state, intrigue, illicit romance, and murder to the limits, and Grange Park’s greatest success, underpinned by Gianluca Marcianò’s agile, drama-savvy conducting and some wonderful playing from the Bournemouth Symphony Orchestra, is that, although Don Carlo is very much a numbers opera with plenty of opportunity for disruptive clapping, here each aria or ensemble fed into the next, turning the screw ever more tightly, with the staging and Verdi’s marvellous music isolating the characters with dismaying severity. The fates awaiting Don Carlo and Elisabetta might not have tallied with history (or with the plot synopsis, for that matter), but were in keeping with the production’s generally doom-laden thrust.

The big set-pieces – Eboli’s ‘Veil’ song with her chorus of ladies-in-waiting, Philip’s terrifying encounter with the Grand Inquisitor, the simple but effective staging of the auto-da-fé Act, the interaction between Rodrigo and Don Carlo – were intensely realised by the cast.

It is also a compellingly inward-looking presentation. As the absolute monarch Philip II Clive Bayley radiated authority, and even when he was at his most vulnerable, in his big solo lamenting the misery of his marriage to Elisabetta, he was brilliantly directed to balance that against his suspicions of her infidelity with Don Carlo; and his generous singing summed up the drama’s huge canvas. Alastair Miles kept roaring melodrama at bay with his superbly judged portrait of the Inquisitor, the blind, pitiless guardian of the faith, the voice huge and perfectly focused. The orchestral accompaniment at his first appearance was like a velvet boa-constrictor, squeezing the life out of everything. Stefano Secco in the title role had a thrilling top register that managed to express both his reckless enthusiasm and his fragility. David Stout’s robustly sung Rodrigo was more of a buccaneering free spirit than a political heavyweight to rival Philip, but his relationship with Don Carlo was finely drawn.

Victoria Tola made the hapless Elisabetta a sympathetic but rather anonymous figure, and she rather overplayed her skill at spinning a high pianissimo line. Ruxandra Donose was magnificent as Eboli, in love with Don Carlos while being his father’s mistress and treacherous confidante to Elisabetta. Both she and her sumptuous mezzo had astonishing presence and she was in total command of the role’s political and sexual machinations. You believed in every word of ‘O don fatale’, in which she curses the gift of her beauty. The Grange Park Chorus was excellent and there was a fine cameo from Jihoon Kim as the ghost of Emperor Charles V.

I was puzzled by the larky boo-hiss audience reception for the opera’s villains, especially in a performance of this quality, one that had got so completely under my skin. Heigh-ho.