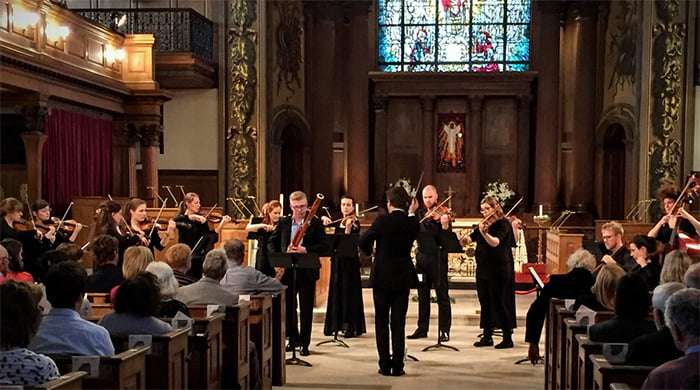 This concert, the first of five to be given by the Philharmonic Chamber Orchestra of London (founded in 2013) at the Greenwich Mozart Festival, contained no Mozart, and was supported by The Grieg Society of Great Britain as part of its Silver Jubilee celebration. I’m not sure what the Society thought of the publicity, announcing that the PCOL “performs great music for strings by British composers and the infamous [sic] Norwegian, Grieg.” Nevertheless he was done full justice to.

The concert opened with Elgar’s beautiful Serenade for Strings. Composed late in Queen Victoria’s reign there is an innate peacefulness which was stressed in Christopher Petrie’s eloquent conducting; his gracious phrasing illuminated the composer’s muse. The central Larghetto was taken very slowly but the tempo was perfect in this context and on reaching the hushed second subject there was something very special happening.

Petrie has arranged Elgar’s Romance for bassoon in a version with strings; it is better known with piano or with full orchestra, but this gentle presentation made an ideal companion for the Serenade. Matthew Petrie (the conductor’s younger brother) stressed the mellower aspects of his instrument – the luxurious melodies, and with much freedom of tempo, makes this music to ‘wash over’ the listener rather than be studied.

Much expressiveness was also evident in Holst’s lively St Paul’s Suite. I liked the way Petrie always allowed the music to die away in the spacious acoustic, which added a rich bloom to the strings. Only then did he relax and the players lower their bows, but sadly, following the first movement, it led to an unwelcome burst of applause, although fortunately this was the only example of interruption.

Grieg’s Elegiac Melodies are arrangements of his songs ‘Hjertesår’ and ‘Våren’ given suitably free translations as ‘Wounded Heart’ and ‘Last Spring’. They were played with the same sensitivity evident in the Elgar. The solemn ‘Wounded Heart’ was thoughtfully done while ‘Last Spring’ was immensely touching – especially when the melody returns high in the violins, a gently breathtaking moment.

This Jubilee concert featured the premiere of Robert Matthew-Walker‘s Variants on Themes of Grieg, the latter woven so subtly into the texture of this lyrical music that the melodic flow can be appreciated without the mind being diverted toward identifying fragments, the only such moment being an accompanying pattern similar to ‘Anitra’s Dance’ (from Peer Gynt). This is music of today and yet it sounds as if Grieg had lived longer and wrote a composition reflecting on earlier times.

His Holberg Suite made a perfect conclusion. Again an expressive reading and with much attention given to dynamic grading but impulse was never lost. I appreciated the obedience to the score when the musette (the central episode of the ‘Gavotte’) moved on at the più mosso tempo requested (I have heard many sluggish performances at this point). The Finale, featuring sparkling moments from leader Tanya Sweiry, was given with the greatest élan.