Mark-Anthony Turnage
Greek – An opera in two Acts to a libretto by Steven Berkoff based on his stage play, adapted by the composer & Jonathan Moore [sung in English] 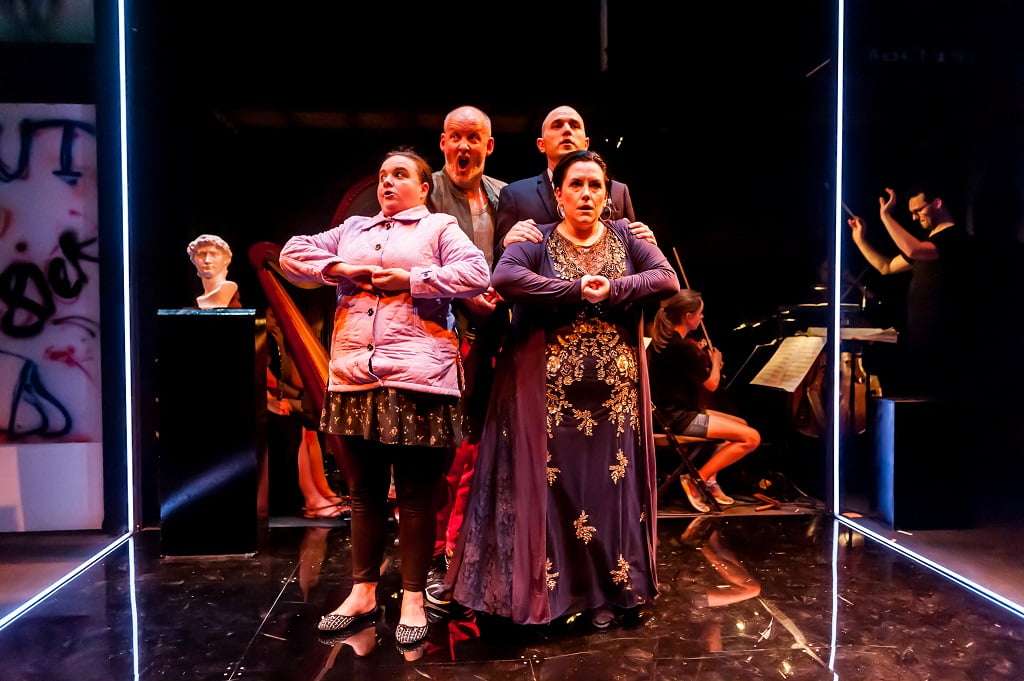 The two previous times I’ve been walloped by Mark-Anthony Turnage’s Greek, I thought it would have gone better in a smaller space – it is definitely not an opera-house opera. The Arcola’s Studio 1 certainly provides that, and the result is claustrophobic, to put it mildly. It suits the work, but you’d think twice about sitting in the front row with the performers only a couple of feet away. Greek is now a venerable thirty years old, and although it’s specifically set in working-class London (references to Islington and Arsenal abound) in the 1970s, it had its premiere in Munich and has thrived internationally. Turnage and Steven Berkoff have reworked the Oedipus myth among the ‘loveable’ rogues of east London, with the plague of Sophocles’s original replaced by evil capitalist greed, and the piece as a whole is a frothing Berkoffian rant against Thatcherism. The setting is date-specific enough to rule out contemporary political concerns such as UKIP or Brexit, but violence, racism and other entrenched suspicions are generously expressed to keep the have and have-not chasm wide open. 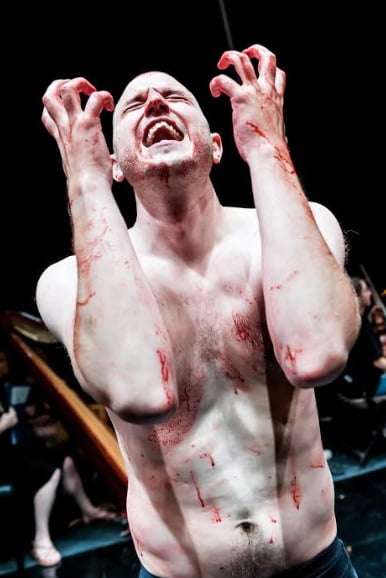 Jonathan Moore, who directed the premiere (and was co-adapter of Berkoff’s play), is back with this Grimeborn revival, a simple affair with a performing area in front of the small ensemble, graffiti-spattered screens (“hipsters out”) and some footage of rioters (recent, to judge from the modern London buses) to clinch the dystopian urban scene. It’s very simplistic, backed up by a send-up of Cockney salt-of-the-earth folk that would be cringe-inducingly patronising if it wasn’t such a gurningly, glottally-stopped caricature, especially these days when Cockneys have virtually disappeared.

Turnage’s music takes no prisoners, a virtuoso aural assault-course of feral, rhythmic violence occasionally relieved by passages of angular, tender lyricism. Orchestrally, it’s loud enough to obliterate a lot of the words, but you get the drift. It doesn’t, however, overpower the commitment of the four singers, who, in this minimalist staging, provide plenty of relentless, agile scene-setting of their own. Richard Morrison (as Eddy’s adoptive and biological Dad) is a fount of brilliantly exaggerated, red-necked, foul-mouthed oikery, Philippa Boyle similarly goes beyond bigoted working-class stereotype caricature as Eddy’s adoptive Mum, and Laura Woods as Eddy’s wife (and biological mother) homes in on her music’s very welcome humanity and warmth. Both Boyle and Woods put on a great double-act as the Sphinx. As Eddy (Oedipus), Edmund Damon is completely in charge of the role’s heady mix of confrontation, violence, vulnerability and visionary aspiration, on the back of powerful singing, admirable diction and outstanding physical agility. Tim Anderson conducts the eighteen-strong Kantanti Ensemble, keeping its splenetic force on the boil and dovetailing neatly with the singers.

This production is worth going to, if only to see and hear how this primary-colour agitprop classic makes out in our current interesting times. As to whether the Oedipus story is enlightened by this particular setting … that has to be in the mind of the beholder.