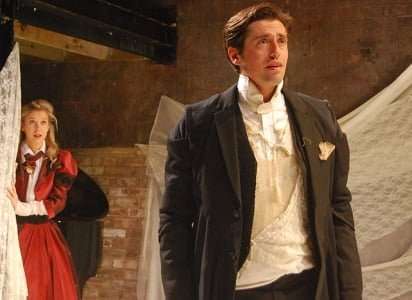 Grimeborn Opera had a notable success with its Pelléas et Mélisande last year, and the company’s new staging of Werther, similarly pared down and abstract, also cuts to the chase in its exposure of motive and desire.

Goethe’s sentimental epistolary novella The Sorrows of Young Werther, about the poet killing himself for love of Charlotte (using her husband Albert’s pistol for the job), became a Euro-cult when it first appeared in 1774. The anti-hero’s blue jacket and yellow waistcoat became the uniform for artistic, unconventional young men; the book was blamed for causing a rash of suicides and banned by the Vatican. With eerie precision, Goethe homed in on the individualism that is such an overwhelming aspect of life today, and it’s this fall-out from extremes of emotion that saturates Aylin Bozok’s simple but intelligent staging. 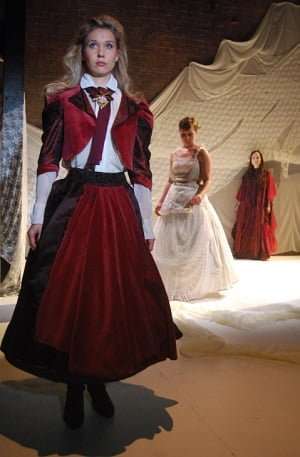 The back wall of the Arcola’s performing space was covered in distressed, virginal-white lace. Bora Aksu’s costumes were more-or-less straitlaced Victorian, except for Charlotte, dressed in more-grungy lace, and Werther, who wore a strange black frock-coat that could have doubled up as a mantle. The only bit of ‘set’ appeared in the second half, a muslin-shrouded white circle that isolated Charlotte as she confronted her illicit love for Werther. Albert’s lending his pistols to Werther was rather played down.

It was a pity that Bozok didn’t resist the modish device of inserting a character either peripheral or not on the cast-list at all, yet who exerts a subliminal but crucial influence on the action. Here it was the silent figure of Charlotte’s mother, who on her death-bed made her daughter promise to marry good, solid Albert. At critical moments, this spooky apparition (acted by Ada Burke) glided on, a sorrowful reminder to Charlotte of her duty to Albert, looking unfortunately like something out of The Addams Family.

Apart from this am-dram act of folly, there was a minimalist rigour to the staging that got to the heart of Werther’s destructive, selfish instability and satisfyingly complemented Massenet’s music – even if it did assume that the audience knew its Goethe. And if it didn’t, there was nothing in the printed ‘programme’ to help them, not even a proper cast-list. 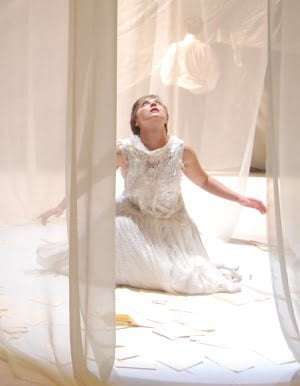 Charlotte, a girl propelled from adolescence to adulthood as the mother replacement to her family (which includes six children in full-scale productions) was beautifully played by Katie Bray. Despite her costume, she caught Charlotte’s awkward displacement between self-absorbed youth and ill-fitting grown-up responsibility. As with all five singers, her French was clear and idiomatic, and her supple mezzo fitted the role’s complex psychology with a wealth of nuanced, elegantly phrased singing. You could see her struggling with her inhibitions, and her Act Three ‘letter scene’ really hit the bull’s-eye.

As Werther, the Canadian tenor Adam Tunnicliffe looked the mad, bad Byronic part, and certainly had the vocal range. He sang with too much Heldentenor heft for the Arcola’s intimate space, with the result that much of Werther’s suffering – and, boy, does he suffer – were consistently externalised. The second half came as a relief, when he reined his voice in, a bit, for the introspection of ‘Pourquoi me reveiller?’ and found that unique romantic despair for a powerful death scene.

Lucy Knight’s Sophie was a brilliantly sung, bubbly contrast to her elder sister. Simon Wallfisch (Grimeborn’s heartbreaker of a Pelléas) put his attractive, light and high baritone to fine use as Albert and injected enough detail to flesh out his mounting suspicions about his wife. Thomas Faulkner as Charlotte’s father, glamorous in a long dressing-gown, looked about the same age as his daughter, but had just enough music to make his vocal and stage presence felt – his bass-baritone makes a very distinguished sound.

Dealing with an old banger of a piano, Philip Voldman heroically took us through Massenet’s wonderful score, one that curls round the libretto with a perceptiveness Richard Strauss might have envied, with a compelling mix of engagement and authority.