This BBC Radio 3 Lunchtime Concert gave a welcome opportunity to hear Smetana’s autobiographical first string quartet, a work initially rejected by the Prague Music Association as being too ‘orchestral’ in style. It may be fully textured but a more likely reason was Smetana’s bold writing as he confronted his deafness. 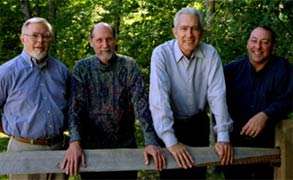 From the Guarneri Quartet it received a dramatic, highly charged performance, taking full account of the work’s sentiments. While exuberance may not have been as forthcoming in the second movement polka this was taken at quite a gallop nonetheless, the musicians digging in grimly but adding a couple of nice touches of expressive rubato for the second theme, which swung under Arnold Steinhardt’s direction, and he came into his own in the slow movement, with sensitively phrased melodies through a beautiful tone on the ‘D’ string, the movement given an expansive introduction from Peter Wiley.

Throughout the performance crackled with anticipation of tragedy. From the dramatic recitative with which the first movement begins, the Guarneri grimly pushed forward, save for the shades of light afforded by the more Romantic second theme. The climax of the slow movement is two hewn C major chords, Smetana’s declaration of love for his wife tinged with insecurity. These pointers were fully realised as the helter-skelter finale halted suddenly, and Steinhardt’s high pitched ‘E’ cut through the texture, the composer’s vivid depiction of the onset of his loss of hearing. From then on the performance rightly failed to recover its momentum, not so much checked as completely stalled.

The set of six that make up Opus 20 are known as the ‘Sun’ quartets, primarily due to the illustration accompanying their publication in 1772. They represent a big step forward for the medium, and that at least shone through as the players seemed intent on drawing parallels with Beethoven in the Adagio, variations that were tense and sombre, not without a sense of occasion, and contained fluent solos from Steinhardt and Wiley, though the former’s vibrato-rich approach cloyed at times and an immediate feature of the first movement, its repeated-note subject given through a thick texture, though, in the third movement, for what is essentially a scherzo with Gipsy themes, the players procured a leaner sound abd passed over Haydn’s potential for humour in the finale’s witty asides of the finale.