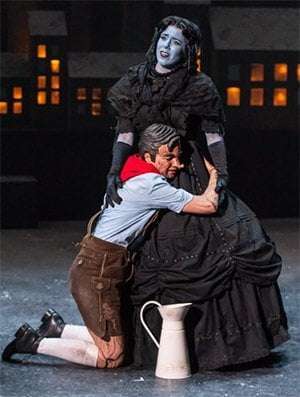 It is just seven years since Opera North premiered The Adventures of Pinocchio, bringing it to London in early 2008, where it was filmed for DVD (Opus Arte) at Sadler’s Wells. Since then it has had its German premiere (Chemintz, the co-commissioner), USA (Minnesota) and Russia (Moscow). While its posterity has already been assured, an opera, like any piece of performance art, has to be continually re-invented, re-imagined and, above all, performed, so – the first student company to take it on – all credit to the Guildhall School for mounting what turned out to be as assured and as enjoyable a production as the original.

Martin Lloyd Evans, Dominic Wheeler and Dick Bird all have form: they collaborated in 2005 here on Jonathan Dove’s The Little Green Swallow – its UK premiere – and the same spirit of invention shines brightly a decade on. It is a tall order, as the story abounds in animal characters and epic scenes, and also demands a cinematic fluidity that follows Geppetto’s discovery of a talking piece of wood that urges him to “make me”, and follows Pinocchio’s quest to become a real boy. As in all missions our hero has to undergo various tests, and Pinocchio learns by his many mistakes – it is only thoughts of his lost father (who he fails to rescue from the sea, at the end of the First Act) and the goodness of the Blue Fairy that sees him through. 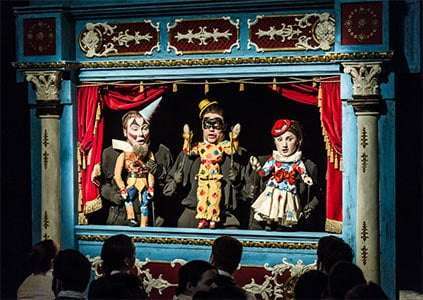 Here the landscape is that of Victorian Britain – Blake’s “dark Satanic mills” are a brooding presence as the backdrop, during the first Act in close-up; in the second a skyline backdrop, belching chimneys and all, the mills themselves with eerily lit windows (courtesy of Colin Grenfell’s excellent lighting). The Chorus is frock-coated, all in black, with top hats and bonnets, surveying the action from raised platforms at the side of Silk Street Theatre’s stage – its wide-screen aperture enhancing the cinematic sweep of the telling. The Blue Fairy is also swathed in black crinoline, only her face blue, enhancing the darker side to the tale. And there is little or no sentimentality. Hence, rather than Disney’s Jiminy Cricket, Pinocchio swipes the cricket dead (although it does return, a little conscience-like as a ghost later on, then returns at the end – rather like Janáček’s menagerie in The Cunning Little Vixen).

The animal costumes are breathtakingly imaginative – mostly just masks. The Cricket clutches green umbrellas to extend the arms backwards, with the longest antennae waving above a crash helmet, while the snail’s stubbier, glutinous ones seem positively to ooze slime. There is the full range of puppetry techniques, not only for the show that Pinocchio encounters, but especially for the sea scenes, with two billowing blue sheets and a model of Geppetto’s ship and Pinocchio swimming; a hooped red silk sheet, complete with teeth for the monster fish’s mouth (from which Pinocchio and Geppetto eventually escape), and a small Pinocchio hung over the larger one’s neck to be trapped in the Big Green Fisherman’s net to portray the difference in size between the two. There is some subtle video projections too: the snail’s painstakingly slow progress down the stairs of the Blue Fairy’s Victorian townhouse particularly witty (especially as she sings of how quick she is being): imaginative, delightful and perfectly pitched.

And then there is the score! Lyrically memorable, with splashes of minimalism and a wealth of instrumental colouring, Jonathan Dove’s music must be as much a joy to play and sing as to listen to. Wheeler and his orchestra played with conviction: attack was pointed, virtuosity was collective, especially from tuned percussion, and the sound was both full and detailed. It was also matched by a large cast and a sizeable chorus, who helped with scene changes and often became an integral part of the action. Although the lion’s share of the music goes to the diminutive powerhouse that is Anna Starushkevych as Pinocchio – in what must be one of the most exciting trouser-roles of this century – the cameos were equally well taken, especially Lauren Zolezzi’s Cricket and Alisa Mainwaring’s Snail, while Joseph Padfield, in the most extreme example of character-swapping, juggled five roles with his resonant bass-baritone.

So, another outright winner from the Guildhall School – received with enthusiastic acclamation, with an eager post-show buzz by this final-performance audience of the four-show run. On this evening Professor Barry Ife presented a Guildhall honorary degree to Tony, Lord Hall.