Semi-chorus of nuns
Chorus of revolutionaries 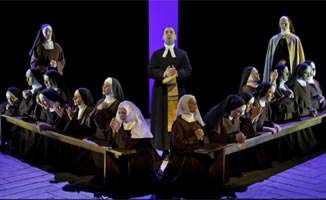 The two most obvious reasons for giving an opera a full staging at a conservatoire such as the Guildhall School of Music are to showcase high-quality talent and to provide the students with experience of performing before an audience. If the work concerned is rarely performed, there may be the added benefit of permitting a re-evaluation of its musical value and dramatic viability. On this occasion all three functions were fulfilled.

Poulenc’s response to the topic is a subjective one. The play by Georges Bernanos struck a deep spiritual chord with him. Their shared belief in divine grace is embodied in the progression of the heroine. Blanche moves from fear and uncertainty to self-awareness and the fulfilment of a mission in the midst of political turmoil. In a fine, exhaustive programme-note, Robin Bowman illustrates through quotations from Poulenc’s correspondence, how inspired the composer was by the subject and how frantically quickly he worked. It even survived the serious nervous breakdown he suffered in the mid-1950s. “Dialogues des Carmélites” has had only three revivals at the Royal Opera House since its original production in 1958 under Rafael Kubelík, all in the original staging and the last in 1983. English National Opera staged it in 1999 (later revived) and the La Scala production by Robert Carsen of 2004 is commercially available on DVD. So it has only a toehold in the repertoire. Its background includes “Pelléas et Mélisande”, whose word-setting techniques it inherits, with phrases on a monotone evolving into emotive lyrical shapes. However, the sense of otherworldliness in Debussy’s masterpiece is replaced by something much more dramatic and realistic. In addition the music is emphatically, gloriously tonal. The irony with which Poulenc approaches his song texts and the piquancy of their musical language are replaced by something much more straightforward. Further remarks in Poulenc’s letters show him taking a swipe at the serialists, with Stravinsky also well in his sights. Poulenc’s casting by vocal type could hardly be called progressive and followed the conventions of nineteenth-century opera: Blanche is a lyric soprano, Soeur Constance a soubrette, the Old Prioress a contralto, Mère Marie a mezzo. 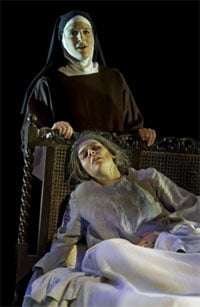 The orchestra, here out of sight, Bayreuth-style, is constantly busy providing support to the singers’ utterances and the dramatic action. Under Clive Timms it took the players a while to warm up and find the right balance both internally and with the stage. Some elements were too prominent and brass blips initially common. The interludes – those extended ones for the 1957 Paris première, I believe – were played with consistent eloquence and by the middle of Act Two enough confidence had been established among the musicians to pass the emphasis from overcoming technical problems to projecting a united view of the style of the work. The choral music which Poulenc provides at various significant points in the work was finely sung.

I confess to anxiety beforehand that Stephen Barlow might impose an alien concept on the opera and the advance information that the production would be in period was reassuring. In fact the conflict between révolutionnaires and ancien regime was conventionally presented, the former dressed in shades of red, their commissaries vulgar and drink-fuelled. Nevertheless there was a constant secondary level of dramatic argument, the inner religious debate covered in the discussions of the nuns (implicit in the opera’s title) and epitomised by Blanche’s progress towards self-discovery. It is misleading to believe that the setting of the action in the middle of the French Revolution is really important. This opera is not “A Tale of Two Cities”! 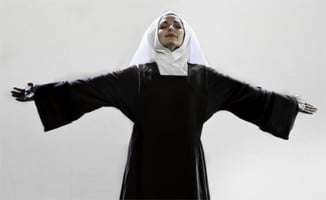 Cátia Moreso as the Old Prioress dominated the stage during her two scenes. Severe and calculating in interviewing Blanche about her application to join the Carmelite Order, she yet managed to hint at a more benign side in the more lyrical music that Poulenc gave to Madame de Croissy in part of the encounter. Then the physical and spiritual anguish which accompany her final minutes were rivetingly portrayed in her death scene – her agony of doubt, her fear of death, almost lead to a breach with God. So powerfully was this acted and directed that one could have been witnessing Christ’s own agony on the eve of his crucifixion. As Mère Marie, Sylvie Bedouelle made her first impact in this scene, restraining the Prioress and holding her faith steadfast when she seemed on the verge of blasphemy.

Madame Lidoine, the newly appointed Prioress, has been played in London by sopranos of the stature of Joan Sutherland, Joan Carlyle and Valerie Masterson. Barlow seemed to want to play down her importance. Her opening address to the nuns was lacking in authority. Mère Marie had to intervene with her support when there was restlessness in the ranks. This is certainly consistent with Mère Marie’s conduct of the crucial ballot on martyrdom from which Madame Lidoine is absent. Though Sky Ingram sang well enough in the latter part, Bedouelle cut a more influential figure and benefited from a useful upper extension to her mezzo-soprano.

The Father Confessor who has to go on the run when the Order is threatened by secular forces, was sung by Alberto Sousa in a clear, bright tenor. His enunciation of the text was always distinct. One could not always say that of the other singers, though all impressed with the accuracy of their French accents. How did we manage before introduction of surtitles? Even if the panel onto which they were projected was rather small their quality and timing were impeccable. Instantaneous translation in such a conversational work is indispensable.

Anna Patalong held the stage throughout as Blanche. A slight flutter entered the top of her voice when under pressure and she was severely tested by her part in the duet with Le Chevalier, reaching up to a fff top-C. Blanche is an enigmatic character, who is depicted by librettist and composer as an austere figure. Inevitably she comes off badly in comparison with the immensely likeable Soeur Constance. In their scene together in Act One, it is Constance who attracts sympathy with her effervescence. Amidst the spiritual meditations she talks of secular affairs, of enjoyment in the outside world, of practical things. Sophie Junker (winner of the 2010 Handel Singing Competition) brought out the character’s fun-loving nature and refused to be intimidated by Blanche’s dampening responses (marked dur and féroce). Ironically she predicts their joint death. Significantly she it is in the later flower-picking scene who voices the central contention that each person dies for someone else. Junker’s impulsiveness and her beaming smile were backed up with reliable vocalism.

Barlow’s direction was largely straightforward and the students’ stagecraft can only have benefited from working with him. Only Koji Terada, although singing well in the opening scene, seemed nervous and wooden in his acting as the Marquis and looked too young. Blanche’s sister the Chevalier began as a dislikeable character, a brotherly concern for his sister’s welfare extended into an unnatural desire to control, as if he knew her better than she knew herself. Then in Act Two/scene three, when the Chevalier comes to the convent to try to persuade Blanche to escape from danger, the fire of their exchanges, backed up by a pursuit which was not far from the tactile, suggested an erotic motivation. I wondered whether this was a directorial apercu. Overt sexuality in this chaste environment would certainly be a surprise. Nevertheless, Poulenc’s handling of the scene is reminiscent of the structure of a love-duet, the writing for voices and orchestra Puccinian in its power. Could the Chevalier’s protestations be coded language for incestuous love? Charlie Mellor in the part revealed a powerful tenor with a baritonal foundation and his acting in this scene was brimming with ardour.

The production is economical in David Farley’s practical designs. A revolve was used to establish different perspectives. The action moved briskly. The moveable wings came in the form of a shattered window-pane which symbolised the iconoclasm of the révolutionnaires, allowing a few essential items of furniture to be moved into position between each of the twelve scenes: a wing chair and ornate fireplace for the Marquis’s affluent household, an altar for the convent chapel (both later re-appeared but had been trashed), austere benches for the nuns. The execution scene was staged symbolically, with the guillotine upstage, surrounded by the baying mob, while the nuns lined up at the front of the stage, each being illuminated with successive falls of the blade. The final tableau saw Blanche transfixed against the background, now pure white and opened out to its full dimensions. This was a thoroughly worthwhile performance.