Rorem
Our Town – Opera in three acts to a libretto by J. D. McClatchy adapted from the play by Thornton Wilder [European premiere] 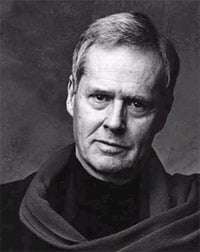 Thornton Wilder’s hugely popular play Our Town (1938) laid down the archetypes of the American dream, a nostalgic never-land about the circle of life in a perfect small town in New Hampshire, the sort of picket-fenced, apple-pie perfection that writers such as Norman Mailer and Jack Kerouac so vigorously trashed, and which is still being robustly pilloried in TV series such as Desperate Housewives. Wilder’s play, though, in its factual objectivity, is far from being just a celebration of impossibly upright, WASP values – Wilder was far too realistic about the melancholy facts of life for that.

Ned Rorem’s music hasn’t made much headway this side of the Atlantic, despite fairly frequent exposure to his songs, and this GSMD production of his opera, first heard in the US in 2006 when he was 83, is its European premiere (and this the second performance). There isn’t much of a plot – Emily and George, the offspring of two decent families in Grover’s Corners fall in love and get married. Emily dies in childbirth; her ghost pleads to relive her time, but she soon discovers that in the surge of life there just isn’t room for or interest in her. 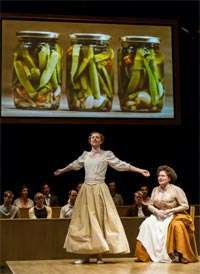 Stephen Medcalf’s production has kept closely to Wilder’s scheme for the play to be realised on an empty stage, and the Silk Street Theatre is rearranged with seats on three sides of the central platform; there is no scenery, and minimalist props of a table and chairs, a great deal of mime (which, for once, was indispensable), and costumes placing the action in the early years of the 1900s. There is rather too much business with the houselights coming up. 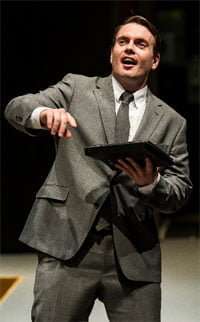 The main role is the Chorus-like Stage Manager, who seems to be controlling the various projections of slide-show images of lonely clouds and beaches and written information and instructions to the audience from his iPad, while directing the action.

The staging is clearly, even clinically managed, emphasising the opera’s quasi-ritualistic, emotionally neutral stance. Stuart Laing played the Stage Manager brilliantly, with a direct line into that wholesome, all-American positivism that we all recognise but don’t always love.

The other main character is Emily, played by Sky Ingram with Little Women-style sunny optimism. She looked good, in a rangy American way, and despite a throat infection seemed up for the role. She naturally took the lead in getting vacillating, baseball-fixated George to the altar, Luis Gomes too puppyish; you could imagine him more effectively as a hand-on-heart American, bullish and a bit thick. Both pairs of parents are strongly characterised and played. The one subversive, tragic character, the alcoholic choirmaster Simon Stimson (who commits suicide and who we are meant to infer is gay), is neatly played by Jorge Navarro-Colorado.

Leonard Bernstein had been after the rights of the play, but perhaps he’d have been too red-blooded and sassy for its gentle, rather passive idyll. Rorem is nearer the mark. He follows the words pretty closely in an unmemorable melodic way, infuriatingly retreating from the possibility of a ‘big tune’; the best music is in his unravelling harmonies in the familiar hymn-tunes that crop up throughout.

In a stage-work in which the words are vital, their inaudibility made you yearn for subtitles instead of the arch, cute bits of information flashed up on four big screens round the theatre, with the result that you only knew something important was going on – for instance, Emily winding George up in Act Two to do the decent, marriage thing, which went on for a long time.

The singers are rarely stretched by the confined vocal lines, and correspondingly do not have much of a chance to shine, although their acting is fluent and assured. I’d have thought that the orchestral sound would have more of an authentic American twang – supplied mostly by the stylishly played piano part – although the GSMD players responded well to Clive Timms’s expansive conducting.