Arne
The Cooper – Opera in two Acts to a libretto attributed to the composer, based on Nicolas Medinart Audinot & Antoine François Quétant’s Le Tonnelier [sung in English]
Stradella
San Giovanni Battista – Oratorio to a libretto by Ansaldo Ansaldi [sung in Italian with English surtitles] 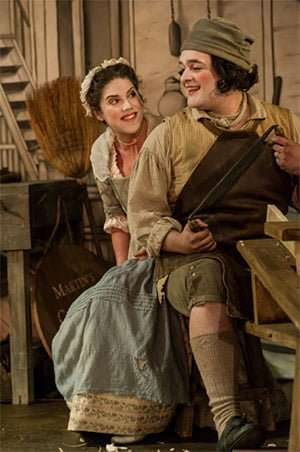 Written virtually one hundred years apart, there is not much to connect the dramatic works presented in this double bill. Furthermore, Alessandro Stradella’s San Giovanni Battista is, strictly speaking, an oratorio, but is ripe for theatrical treatment. At the root of both works can be seen a misplaced love interest, but their consequences are worked out very differently.

In Thomas Arne’s The Cooper (1772) both Old Cooper Martin and Colin are besotted with Martin’s ward Fanny, to comic ends. Martin only resigns himself to Fanny’s union when Colin’s uncle Jarvis waives a debt Martin owes him on condition that Fanny be allowed to marry Colin. It is a ballad opera, bordering on farce, where many numbers are inspired by catchy popular and folk songs, and it stands in the tradition inaugurated by The Beggar’s Opera which sought to create a more vernacular version of musical drama, in defiance of Italianate opera seria. This production takes it honestly and straightforwardly by setting it at the time of composition.

The piece hardly demands much by way of subtlety, and a good earthy performance is what it received here, with musical- and character-acting required on the part of the singers rather than formal deportment. However, both Gerard Schneider and Anna Gillingham as Colin and Fanny respectively were fully able to blossom into more extended and – in the context – highfalutin’ music when necessary. Frazer B. Scott carried off the debauched, drunken Mr Twig well, as did Piran Legg as the bumbling old Martin.

San Giovanni Battista (1675) covers similar ground to Richard Strauss’s Salome, and only a little less luridly. There is no ‘Dance of the Seven Veils’, but in this production Salome does caress John the Baptist’s severed head in deranged entrancement. Her seductively evil character was manifested in her black ballerina dress and tutu, like a warped figure from Degas, in stark contrast with the white robes of the Baptist and his followers. Lauren Zolezzi sang with a vocal agility which gave her suitable allure: enough to stir Herod from the disillusion and indecision he seemed to feel at the beginning, contemplating whether to continue his life of destructive pleasure with Herodias. 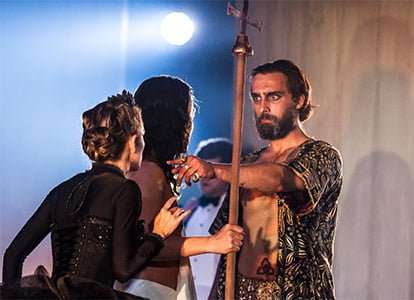 Here, Joseph Padfield was not so much terrifyingly in command as torn between his hedonistic and ascetic natures, as exemplified by Salome and the Baptist respectively. His acquiescing in Herodias’s and Salome’s demand for the Baptist’s head was desperate and defensive, forced upon him by the two scheming women, rather than stemming from his faculties of reason and justice. Padfield caught all this in a convincingly well-rounded characterisation of the role. Alison Langer as Herodias was less vocally distinguished than Zolezzi’s Salome, but she certainly showed herself as sleazy and lacking in any moral scruple with her occasional flirting and cavorting with the Counsellor. Curiously, Schneider was less secure in that role than he had been in the Arne, tending to sound strained and bawling in the higher tenor range.

In Strauss’s Salome, Jochanaan’s presence is striking as a sonorous, largely disembodied baritone voice. In Stradella’s oratorio the Baptist is physically present, but sounds equally haunting as scored for countertenor (presumably a castrato in the original) and frequently with the solemn accompaniment of the organ. It seemed to be a deliberate part of his realisation that Meili Li sounded and appeared coolly detached, indifferent to his fate, except insofar as it allows his soul to be released from the clutches of the body – in contrast to the way in which Herod seems to be trapped by the urgings of his body. The patriarchal cross staff the Baptist wielded might have seemed anachronistic, but it was not especially problematic to see him, in his torments at the hands of Herod and his sycophants, as a foreshadow of his cousin Jesus Christ. If any moral is vouchsafed in this drama, it is the virtue of repentance.

Ensemble among the chorus and orchestra, led by Julian Perkins, was generally very good, except for occasional ragged playing by the instrumentalists. This proves, then, to be a very worthwhile venture, not only for rescuing two neglected works – the Stradella is certainly a significant link in the chain of development from the period between the first generations of opera composers and the era of High Baroque opera seria. But these productions also demonstrate the imagination regularly displayed by London’s conservatoires in terms of repertoire and dramatic realisation.