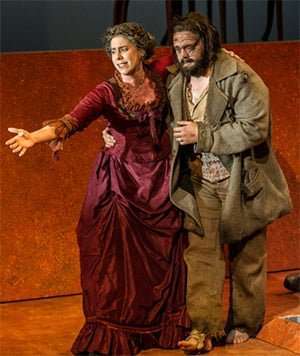 There is no hidden agenda linking Debussy’s retelling of the parable of the Prodigal Son with Donizetti’s one-act comedy about a husband, over-jealous and over-protective of his wife, being taught a well-deserved lesson. Apart from both works being produced at a time when their composers were becoming better known, that’s about it.

The Donizetti, commissioned for a royal gala in Naples in 1831, sank without trace, with interest most recently rekindled by the fine Opera Rara recording. Debussy’s L’enfant prodigue isn’t even an opera – described both as a lyric scene and as a cantata, it was his 1884 Prix de Rome-winning work, an early piece much in thrall to Massenet and the Russians, with a few anticipations of his mature style in the instrumental interludes. Stephen Barlow has placed his staging at the time it was composed, with Siméon, the patriarch presiding over a well-to-do French bourgeois family. The setting isn’t suited to the score’s many exoticisms evoking tent-dwelling life in the desert, except that, at a stretch, it might relate to the period’s fascination for the mystic orient.

During the orchestral passages, there are quite a lot of characters standing around looking glum, but otherwise the three main roles were strongly cast. Lauren Fagan’s rich mezzo caught well the mother’s loss and sorrow, expressed in a fine solo and an even finer duet with her errant younger son Azaël. He was played by Gérard Schneider, who sailed through the role’s range with considerable power and control – you could easily imagine him in a romantic tenor lead. The father’s sternness yielded convincingly in Piran Legg’s movingly sung performance. Unlike in the original parable, the loyal elder son – understandably rather miffed at the attention given to his wastrel sibling – Is given very little to do in Debussy’s version, although Robin Bailey made the most of being disgruntled. If the singers had lightened tone and volume from time to time, that would have made the words much clearer. Dominic Wheeler (head of GSMD opera studies) and his substantial orchestra gave Debussy’s score its moments of epic biblical sweep. 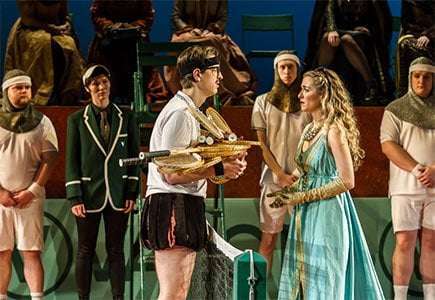 After that half-hour of sober restraint, the production team went to town on Francesca di Foix. The king of the original was probably François I of France, from the house of Valois. Hence the name of the fashion house – Valois – that is celebrating its spring collection as a camp – no, very camp – recreation of a renaissance court. The monarch, set on luring the Count di Foix’s reportedly hideous, uncouth wife to court with the help of the Duke and his page, is a parody of fashion deity Karl Lagerfeld, complete with white hair in a pony-tail, huge sunglasses and rubber waders, surrounded by fawning acolytes ready to fulfil the tiniest despotic whim. The Count, in a suit and doublet-and-hose creation, has been promoted to manage the Valois fashion house, and the only aim of the design’s collision of ‘Ab Fab’ and Monty Python is to send up the pre-occupations of the fashion industry – and it does so with aplomb.

The Countess, who of course turns out to be a great beauty, made her first entry dressed in an iridescent burkha, which neatly summed up her virtually imprisoned status with the Count, and set about working her charms, the Count rendered powerless unless he comes clean on all the lies he’s told about her. Everything is resolved in a tennis tournament (sponsored by Valois) in which the male chorus, dressed in tennis whites and chainmail hoods disport themselves, merrily choreographed by Victoria Newlyn.

The score, with its future loans to L’elisir d’amore, has some fine ensembles and tuneful solos and matched the production’s frothy glee. As Francesca, Lauren Zolezzi’s vivacity and secure coloratura marked her accomplished singing. Joseph Padfield was wonderfully saturnine as the King, and his attractive singing had the right lightness and bounce for a Donizetti baritone. Samuel Smith generated well-characterised mischief as the Duke, and was terrific singing the tenor’s big aria. Marta Fontanals-Simmons was a vividly performed Page, the attention she gave to vocal colour and grading of volume distinguishing her fine contribution. Szymon Wach’s tight singing and attuned comic timing created an impressively hapless, floundering Count. The wittily directed chorus was magnificent, and the GSMD Orchestra, conducted by Wheeler with fitful attack, easily negotiated Donizetti’s light-headed scoring.