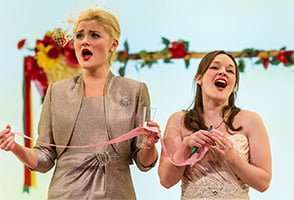 The Guildhall School Opera course here tackles one of the supreme achievements of Western civilisation with mixed success: Le nozze di Figaro – operas performed recently include less well-known or less-performed works, such as La Navarraise, and Le Portrait de Manon (both by Massenet); Comedy on the Bridge (Martinů); A Midsummer Night’s Dream (Britten – Guildhall School’s next production is Owen Wingrave); and Our Town (Ned Rorem). Taking on an opera that is as familiar as Figaro presents particular challenges, and this imaginative updating – to contemporary America – only went part-way to being a success. 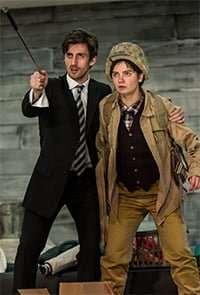 During the Overture Mexicans are being smuggled across the border. Fast-forward two years for one of the aliens to now being a Republican Party official (Count Almaviva possibly a Senate candidate, clean-cut, with the Countess as his ice-blond wife), their chauffeur and maid being Figaro and Susanna respectively. It is a neat turn of events that’s worth exploring, but the staging does not go far enough in exploring the politics. In fact, other than the situation itself, no comment is made at all. To have Cherubino sent off to war seemed pointless, when it would make more sense to have him deported. The revelation – spoiler alert! – that Figaro is the long-lost son of Marcellina, Doctor Bartolo the father, could have been about them losing their baby to people smugglers. The possibilities are there, but unexplored.

Act One’s bedroom (Figaro’s and Susana’s) is as messy as any young couple might have. The Countess’s bedchamber is a minimalist affair, clean and modern, with a balcony – ridiculously, the Gardener enters (to inform the assembled company that he saw a man leap from it and wreck his carnations) and leaves via this veranda – and the wardrobe. Act Three’s first scene is the Senator’s office, with placards warning about illegal immigration (one poster reads: “Todays Illegals; Tomorrows Democrats” – apostrophes missing!), which gives way to many deckchairs for a beach double-wedding. A dimly-lit garden with trees is fine for the final Act, with plenty of atmosphere for the mistaken-identities and comings-and-goings. 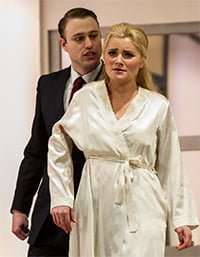 The pairings of the principal couples were well-matched, though it was the Count of Benjamin Appl that dominated proceedings; he gave a superb characterisation, the alpha-male, and despite finally receiving his comeuppance, he still held the stage. Appl is an imposing presence, and he made a believable action-man, keeping the buffo aspects in check. Samantha Crawford’s imperious Countess worked for and against the opera, but she complemented Appl well. The central coupling of Figaro and Susanna was as successful. Hadleigh Adams, sporting a fine baritone, enjoyed the twists and turns, though he failed to extract the farcical moments of this ‘below stairs’ characters; similarly Lucy Hall, who was otherwise an energised Susanna. The rogue Cherubino, desperate to get it on with the Countess, was well-dispatched by Anna Starushkevych: her woman-playing-a-man-playing-a-woman scene was delightful. Roisín Walsh’s Marcellina and James Platt’s Bartolo made for a loveable pair.

It‘s a shame, then, to report that the singing generally was lacking in colour, nuance, and feeling. For all the performers the notes were secure, but the dry acoustic of the Silk Street Theatre does not help – overpowering, even unpleasant at times. Musically, the show was stolen by the orchestra. Dominic Wheeler has the measure of this score, and his players responded superbly, producing the emotions of the story.