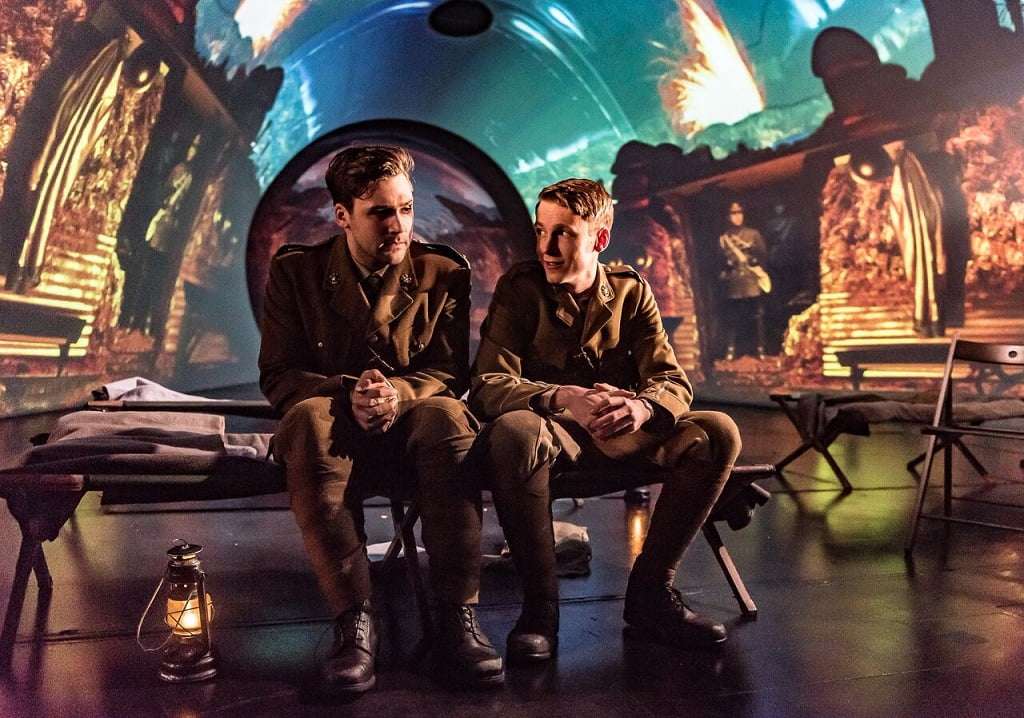 Noël Coward wrote Post-Mortem in 1930, following his own appearance in a production of R. C. Sherriff’s antiwar play Journey’s End. That play influenced his thinking on the subject of war but, after writing Post-Mortem he decided it was not suitable for staging. In fact it was not performed until 1944 when it was staged in a prisoner-of-war camp in Austria. A production had been planned in 1935 in a UK provincial theatre that specialised in presenting new work, but nothing came of the project. It has never played London’s West End and had to wait until 1992 before it reached the capital and then only on the fringe at The King’s Head pub theatre in Islington with a cast that included Harry Burton, Steven Pacey, Avril Angers and Sylvia Syms.

However, it did appear on television as part of a BBC series called The Jazz Age in 1968. The recently deceased Keith Barron played the leading role of John Cavan, an officer in the trenches in France in 1917. Others in the cast included Brian Croucher, Colin Farrell, Colin Jeavons, Bernard Lee, Garfield Morgan, Moira Redmond, Yvonne Antrobus, Nora Swinburne and Kynaston Reeves. 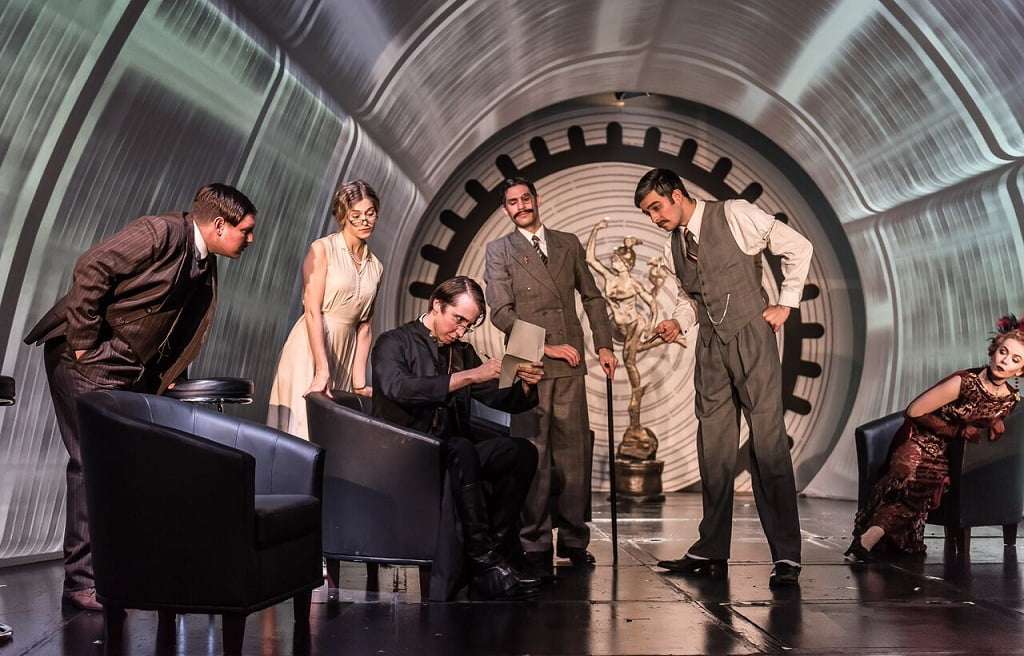 Post-Mortem was not what Coward’s audience might have expected of him, as it was not a trivial comedy in the vein of Hay Fever, Private Lives or Blithe Spirit, and it was certainly nothing like his comic songs, but instead a serious commentary on the futility of war. This may have contributed to its not receiving a theatre production for over sixty years. Even Coward himself was not surprised, although he predicted that one day it would be produced. At least, if he had seen the television production, his prophecy would have come true well before he died five years after the broadcast.

In the event Coward had nothing to be ashamed of or even mildly worried about Post-Mortem. Despite its author considering it “sadly confused and unbalanced” it is still a fine piece of writing that packs a punch every bit as tough as Journey’s End, a play that has been revived umpteen times since it was written in 1928 and after some ninety years still has something to say on the subject of conflict. Coward’s play offers a sympathetic companion piece to Sherriff’s work and currently receives an excellent production by the students of Guildhall School.

Post-Mortem is a one-Act play in eight scenes lasting just under two hours. The opening and closing scenes are set in the trenches in France during World War One. John Cavan is the officer son of London newspaper publisher, Sir James Cavan. He has an argument with another officer, Perry Lomas, who accuses Cavan’s father of glorifying the war for the sake of a good story. When John is wounded under enemy fire he is returned to the trench where he dreams of his family and friends, imagining what their reactions might be to the war. The play then moves to England in 1930 where John, now a ghost but still in uniform, meets the survivors of the war to see how they feel some ten years after the conflict has ended. 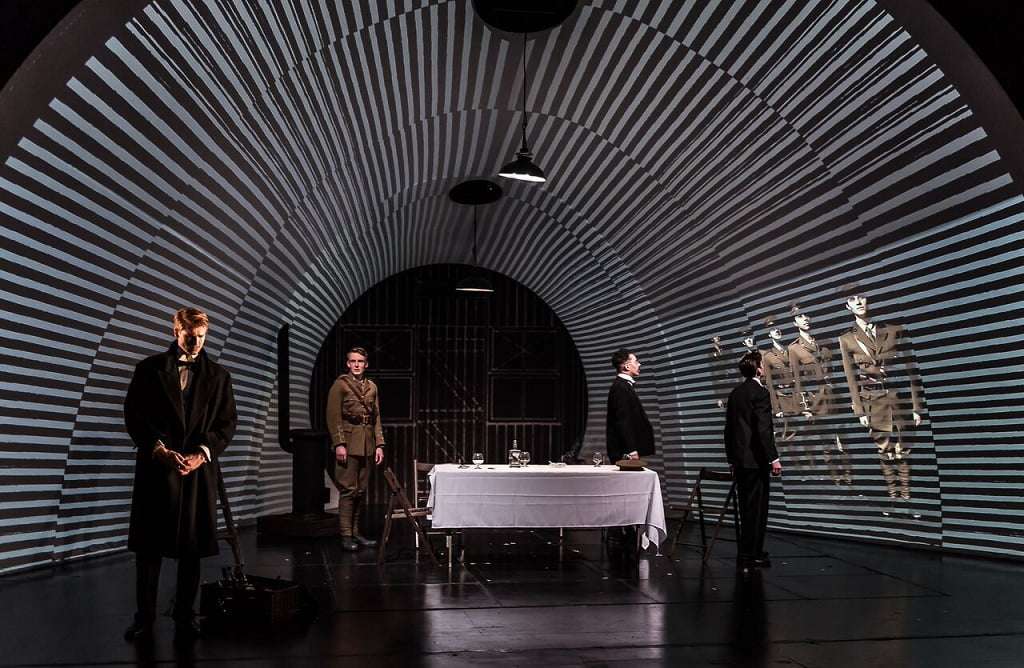 His friend Perry has written a book about the mistreatment of soldiers returning from active service. John’s mother, Lady Cavan, hates the book and his father wants to see it banned, but his former fiancée, Lady Monica, now married to another man, sees the book as something rare to be prized for its monetary value. When John Cavan revisits his father’s newspaper he sees nothing but the sensational glorification of the hostilities. He concludes that there was little point in going to war because it’s all a joke, he never wanted to be born and his and millions of others’ deaths were a totally futile waste of humanity. His ghost returns to the trenches in France in 1917 where he finally dies.

So, not the usual Coward light-hearted frippery, no comedy and certainly no songs, but instead a sharply satirical stab at the attitudes to war that still cuts very deep. The only comic element in the play is Coward’s depiction of those in charge of the country, the businessmen, the aristocracy and the church, as blind fools. Although Coward was writing from the heart, in fact he was probably too hard on himself by taking the blame for the play’s lack in attracting managements prepared to stage Post-Mortem. That said, this revival by director Lucy Bailey works on every level and does not seem dated or implausible at all. Bailey is aided by a supremely talented young cast who present some marvellous ensemble acting, while William Dudley’s brutally elegant designs with the theme of tunnels are beautifully lit by Chris Davey and with the bonus of some brilliant live-action cinematography by Billy Dudley and ethereal sound-designs by Yool Lee.

Tom Glenister is incredibly moving as John Cavan and he is well supported by Nicholas Armfield as Perry Lomas, the writer who cannot bear to live with the horrors of The Great War that was supposed to end all wars, Finlay Paul as his misguided father and owner of the Daily Mercury and Phoebe Marshall as John’s mother, Tallulah Bond as Monica, and particularly by Harry Harrington as Eggie Brace, a barnstorming gossip columnist who seems to live on another planet. But, in effect, the whole company equips itself exceedingly well. Time, now, for a professional revival, I think.