Skip to content
LnRiLWNvbnRhaW5lcltkYXRhLXRvb2xzZXQtYmxvY2tzLWNvbnRhaW5lcj0iNmIzNDMzNmNmZTc3NWZiNGJlMTVjMmIwMzU3NWM1MjYiXSB7IHBhZGRpbmc6IDI1cHg7Ym94LXNoYWRvdzogNXB4IDVweCAxMHB4IDAgcmdiYSggMCwgMCwgMCwgMC41ICk7Ym9yZGVyOiAycHggZG90dGVkIHJnYmEoIDEwOSwgMTA4LCAxMDgsIDEgKTsgfSAudGItZmllbGRbZGF0YS10b29sc2V0LWJsb2Nrcy1maWVsZD0iODM3Y2ExZjc0MGRjZDdkOTdlMzQzOWMyYjIwMWZmZTMiXSB7IGJhY2tncm91bmQtY29sb3I6IHJnYmEoIDIzOCwgMjM4LCAyMzgsIDEgKTtwYWRkaW5nLXRvcDogMTBweDtwYWRkaW5nLWJvdHRvbTogMTBweDtwYWRkaW5nLWxlZnQ6IDEwcHg7IH0g
LnRiLWNvbnRhaW5lcltkYXRhLXRvb2xzZXQtYmxvY2tzLWNvbnRhaW5lcj0iNmIzNDMzNmNmZTc3NWZiNGJlMTVjMmIwMzU3NWM1MjYiXSB7IHBhZGRpbmc6IDI1cHg7Ym94LXNoYWRvdzogNXB4IDVweCAxMHB4IDAgcmdiYSggMCwgMCwgMCwgMC41ICk7Ym9yZGVyOiAycHggZG90dGVkIHJnYmEoIDEwOSwgMTA4LCAxMDgsIDEgKTsgfSAudGItZmllbGRbZGF0YS10b29sc2V0LWJsb2Nrcy1maWVsZD0iODM3Y2ExZjc0MGRjZDdkOTdlMzQzOWMyYjIwMWZmZTMiXSB7IGJhY2tncm91bmQtY29sb3I6IHJnYmEoIDIzOCwgMjM4LCAyMzgsIDEgKTtwYWRkaW5nLXRvcDogMTBweDtwYWRkaW5nLWJvdHRvbTogMTBweDtwYWRkaW5nLWxlZnQ6IDEwcHg7IH0g
Julian Philips
The Tale of Januarie – Opera in four Acts to a libretto by Stephen Plaice based on Chaucer’s The Merchant’s Tale from The Canterbury Tales [sung in Middle English, with surtitles in modern English]
LnRiLWNvbnRhaW5lcltkYXRhLXRvb2xzZXQtYmxvY2tzLWNvbnRhaW5lcj0iNmIzNDMzNmNmZTc3NWZiNGJlMTVjMmIwMzU3NWM1MjYiXSB7IHBhZGRpbmc6IDI1cHg7Ym94LXNoYWRvdzogNXB4IDVweCAxMHB4IDAgcmdiYSggMCwgMCwgMCwgMC41ICk7Ym9yZGVyOiAycHggZG90dGVkIHJnYmEoIDEwOSwgMTA4LCAxMDgsIDEgKTsgfSAudGItZmllbGRbZGF0YS10b29sc2V0LWJsb2Nrcy1maWVsZD0iODM3Y2ExZjc0MGRjZDdkOTdlMzQzOWMyYjIwMWZmZTMiXSB7IGJhY2tncm91bmQtY29sb3I6IHJnYmEoIDIzOCwgMjM4LCAyMzgsIDEgKTtwYWRkaW5nLXRvcDogMTBweDtwYWRkaW5nLWJvdHRvbTogMTBweDtwYWRkaW5nLWxlZnQ6IDEwcHg7IH0g 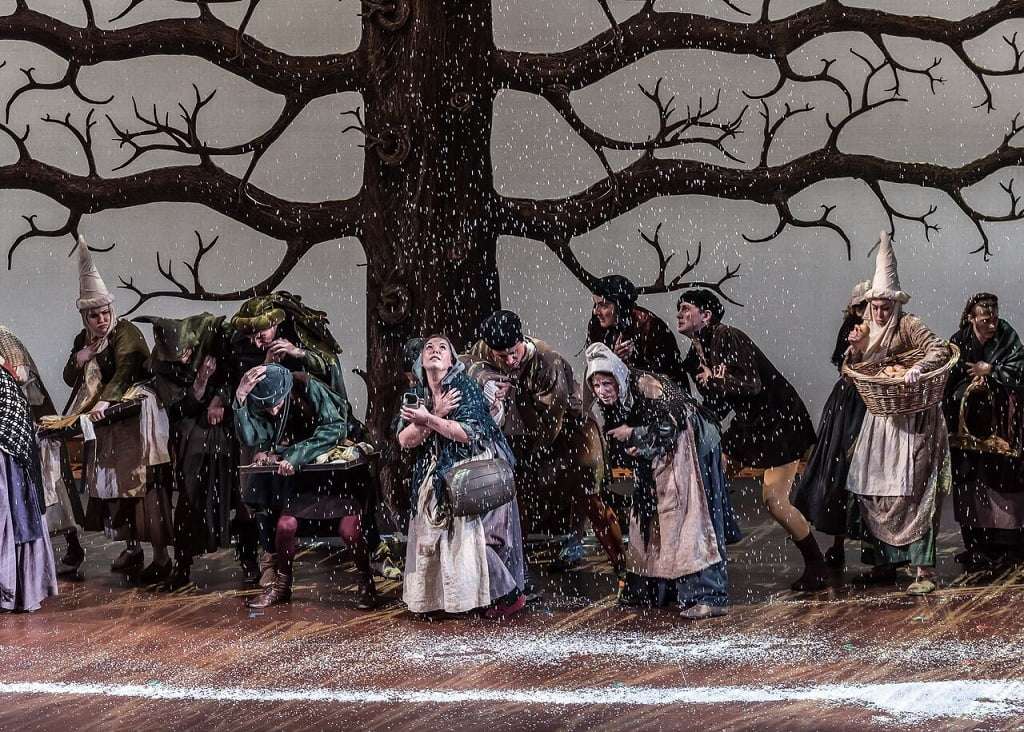 London was hosting two opera premieres on this night based on two of the sturdiest pillars of English literature, Shakespeare and Chaucer, the former’s The Winter’s Tale, re-imagined by Ryan Wigglesworth for ENO, and, in a rarer musical outing for the medieval poet, the latter’s The Merchant’s Tale from The Canterbury Tales, lavishly staged by the Guildhall School of Music & Drama in its in-house theatre and written by the School’s Head of Composition Julian Philips and Writer-in-Residence Stephen Plaice.

In The Merchant’s Tale, the merchant in question regaled his fellow Canterbury pilgrims with the classic story of the old, unrepentant chauvinist Januarie, a man in the winter of his life, who takes for his dotage a springtime teenage bride, May, who in turn takes a young lover, Januarie’s squire Damyan. Plaice has compressed, very successfully, the original to its bare necessities while expanding the poem’s fleeting references to the god Pluto and his wife Proserpina (who had their own marital problems to contend with) and to Priapus into much bigger roles commenting on and intervening in human folly and expressing Chaucer’s entirely modern moral liberalism. While Plaice may have played fast and loose with the text, Chaucer’s uninhibited ribaldry and timeless perception survive unscathed. 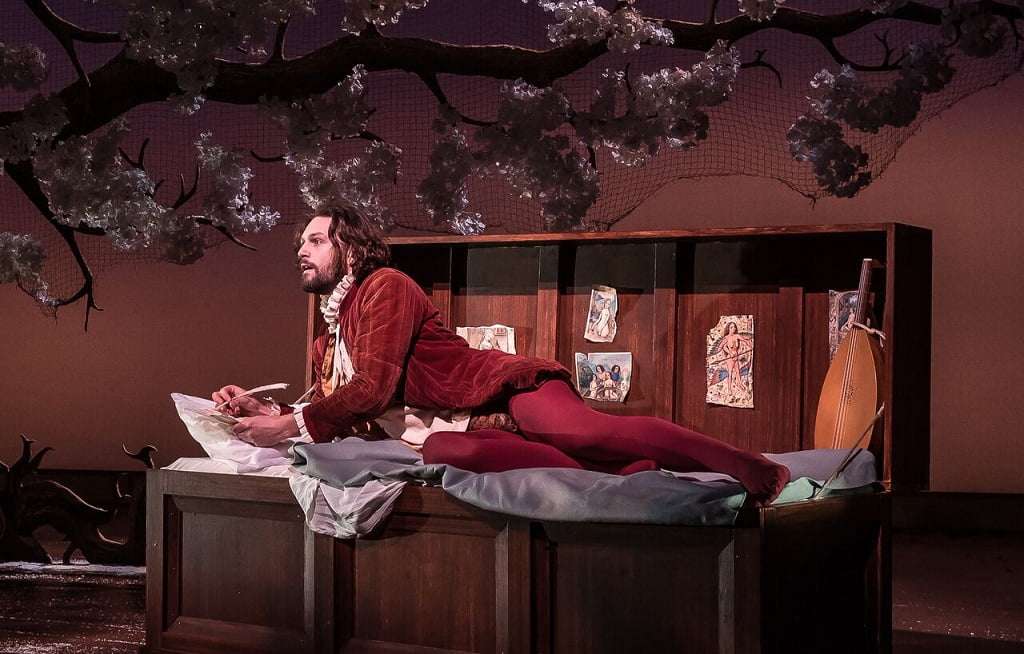 Martin Lloyd-Evans’s staging is vigorous and direct, while Dick Bird’s lovely set, basically the aforementioned pear tree (here unequivocally the tree of the knowledge of good and evil) elegantly changing its foliage with the seasons, and excellent costumes derived from medieval Dutch paintings with bosoms and cod-pieces sometimes as strained as the humour suit the piece down to the ground – and I particularly liked the scene set in Januarie and May’s marital bed, which looked like something straight out of a medieval manuscript illumination. 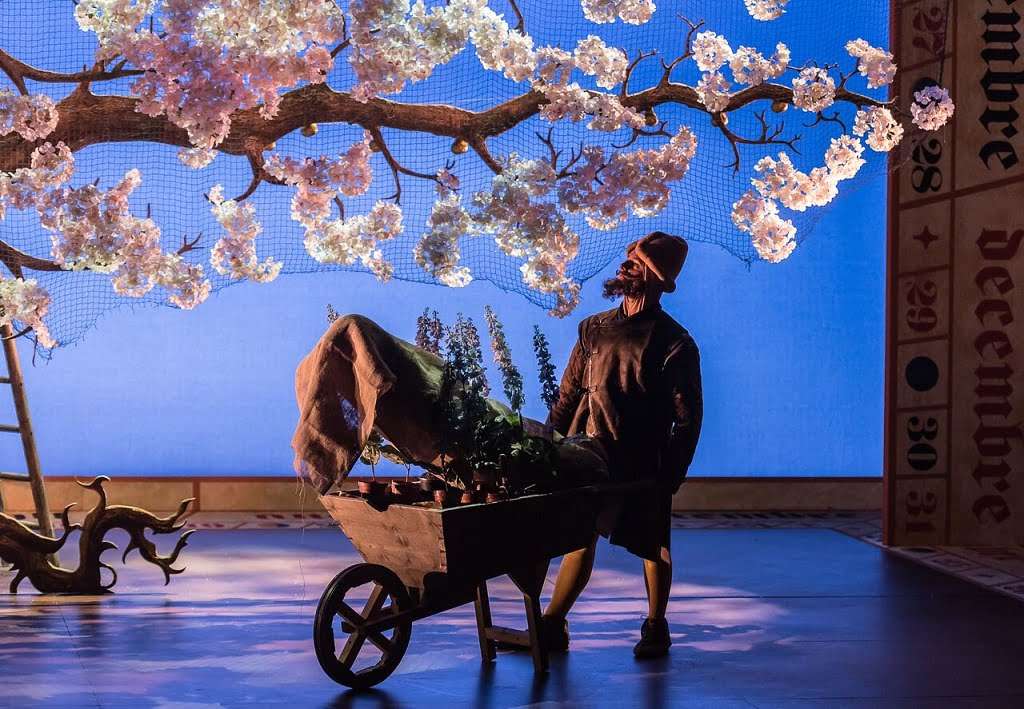 As he has proved in The Yellow Sofa and How the Whale Became, Philips is a natural stage composer, with a style of music that rises to the most dramatic challenges, and he also has an ear tuned to timbre and sonority, which the GSMD orchestra delivered confidently. As with French Baroque Opera, however, I do find his lyrical style forever skirting around true melody relentless, making the long (getting on for eighty minutes) first half seem even longer. His eclectic music – think beautifully scored Britten and glamorous Bernstein chutzpah – is leavened by some expressive solos for Damyan and May, but some more spoken dialogue would sharpen things a lot and would also make the big set-piece choruses of rumbustious villagers much more effective.

Emulating a Falstaffian degree of lack of self-knowledge as Januarie, John Findon proved conclusively that there is no fool like an old fool with singing as robust as his comic acting, and his music deepens considerably to accommodate his blindness (at the hands of Proserpina as punishment for his sexual demands on May) and his self-deluding conviction, even as he dies, that the child May is carrying must be his. 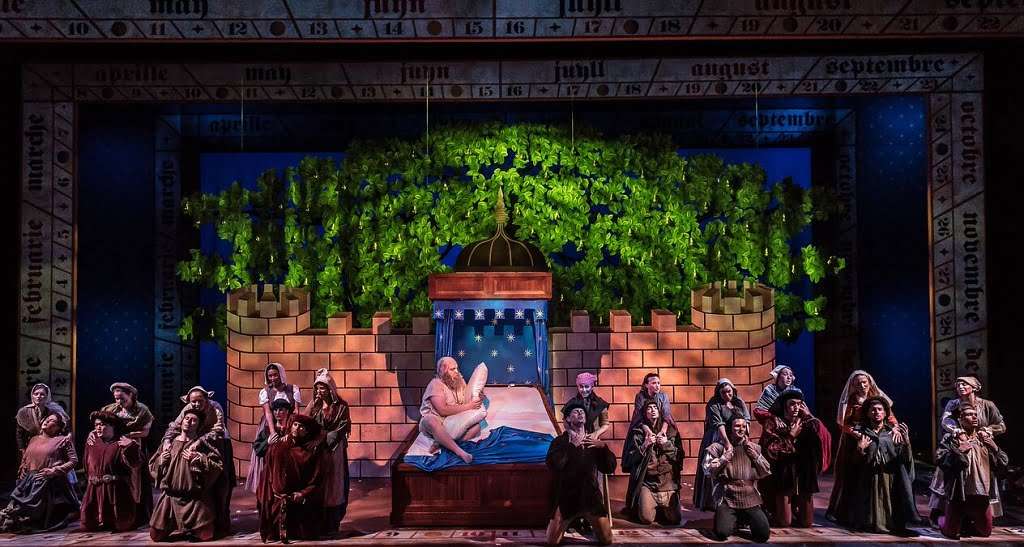 Anna Sideris’s warm soprano and incisive acting made duplicitous, self-serving May a bride to be reckoned with, and she was well matched by Daniel Shelvey’s long-suffering, supercilious and eloquently sung Damyan. None of the three leads’ music sounds particularly challenging vocally but it offers plenty of dramatic possibilities.

Elizabeth Skinner’s excellent Proserpina was accompanied by an impressive trio of nymphs from Chloë Treharne, Bianca Andrew and Jade Moffat, and Martin Hässler, dressed like Death from Bergman’s film The Seventh Seal, delivered Pluto’s devious machinations with suitable gravitas. Daniel Mullaney and Jake Muffett, as Januarie’s fawning stooges Placebo and Justinus, made the most of the opening debate on the pros and cons of marriage, and George Edwards’s Priapus, trundling his enormous member around in a wheel-barrow, reminded us what the story is really all about. Dominic Wheeler got great results from the orchestra, the players relishing the onomatopoeic sounds of Januarie and May’s wedding night and May’s brief moment of privacy in the privy.

The Tale of Januarie is a great vehicle for a student production, and you can’t help being impressed by Julian Philips’s facility. I just hope that one of these days he’ll write something that engages rather than plays with my emotions.